The fantastically fragrant and photogenic flowers from HighFocusDC.com instantly caught your Gentleman's attention and affections this week. This new delivery service aims to promote local photographers by taking advantage of Initiative 71 and offering a gift of premium cannabis. Naturally, I think that's a fabulous way for an artist to get their name out there. Hey, maybe something like that would work for an Armageddon-obsessed, egomaniacal scumbag and wannabe writer tortured by the Elder Gods with delusions of grandeur. Hmm, what do you think, girls? It's spring today! I'm officially ready to call it. I feel the sun's warmth down in my bones and I think it's here to stay this time, give or take some chill when it rains. Bet-hedging, baby! But I think I can finally come out of hibernation and rejoin society. As part of my rehabilitation, we're gonna ignore the legion of political horrors currently erupting from the gaping Hellmouth Buffy somehow neglected below the Oval Office and talk about cool stuff I've found around that I think you'll dig, too. I checked with my editor, Extra-Salty GT, and he didn't take his eyes off the Gilmore Girls reruns to flip a double-bird my way, which means it's fine. Thanks to one of those NOW THIS WEED videos, I found out about graphic artist Todd Pearl's noble quest to illustrate every cannabis strain known to man. That can't be right, there's bound to be some redundancy, not to mention pictures of just straight up fruit if that were the case, but you get the idea. Okay, but the reason I'm bringing it up is that his art is straight fire. I love the images I've seen so far and best part is, you can help make the project happen via Kickstarter, with the typical bevy of sweet rewards available when you crowdfund artists- including choosing a strain for him to illustrate. For $200, if I was in the industry, I'd have already bought one for my flagship genetics and not told you about it because I'm a hard-knuckled, balding businessman that communicates to his wife of thirty years only in grunts in this particular, umm, hypothetical, and my competition can suck it. Right, so the other guy I wanna tell you about is an author named Robert Brockway. You might have heard of him already. His writing on Cracked.com was very popular and he's transitioned to full-on authorship, first with Rx: A Tale of Electronegativity, then with a series titled The Vicious Circuit (here's the link to The Unnoticeables, Book 1), which expands on some of his best work from his work at Cracked, the soulless Mario Lopez and Nero-like movie producers bits, and builds a time-crossing tale between the hardcore 80s punk scene and the pretentious plasticity of modern Hollywood that blends Lovecraftian horror and typical Brockway hilarity with an insightful exploration into the material of human consciousness and individuality. If you enjoy my writing (stop it, I'm blushing), you are really gonna dig his.  Now, I'm not sure how successful I need to get to cross the line from possibly-unhinged stalker to eccentric colleague, but I'm very much looking forward to riding around Portland on motorcycles, kicking over trashcans, and breakin' the law like the besties we were always destined to be when I get there. [caption id="" align="aligncenter" width="500"]

Men will gnash their teeth in consternation, their womenfolk wailing in fear at our passing! The circumference of this foul, polluted rock shall tremble![/caption] Onto the Gentleman's most favoritest thing, weed! Chemdawg first, Chemdawg first! I rejoiced when HighFocus let me sample some of this fine hybrid, one of my all-time personal favorites. One of the few strains I've found that hits on all three of the main issues that cannabis medicine helps me manage- strong mood enhancement to conquer depression, alleviation of anxious thoughts, and a fatigue-conquering blast across sinew and synapse. Chemdawg is not for chilling out- it's for getting ish done, son. This batch delivers an exemplary expression of these genetics with the delicious diesel funk you expect, expertly trimmed and cured. Literally. Like, to your door, right now. [caption id="attachment_1797" align="aligncenter" width="300"] 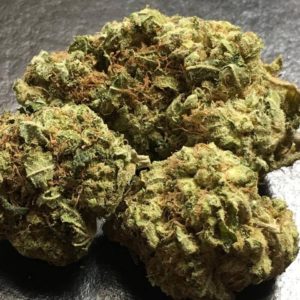 ChemDawg[/caption] Maybe your taste leans more indica in nature. No worries, HighFocus has got ya there, too! I had some of their excellent Bubba Kush. Again, you'll find the soft, chocolate aromas you'd expect from this flower, famed for its ability to relieve muscle tension, pain, and aid sleep. Some fan leaves were left on, which is OK by me when the trichomes dazzle like these. This is what you want to smoke if you're planning to chill out and binge-watch the new season of Trailer Park Boys or sit through the entire seven-and-a-half-hours of a major league baseball game. I mean, on TV, you can admire (or ballyhoo) the pitching, but you just can't get that angle at the ballpark, plus I always get yelled at by some irate parent over my relentless cursing in earshot of their precious spawn. Well, excuse the ever-loving shit outta me, folks, I didn't realize young Senator was such a fragile fucking tulip. He better get used to it, he's gonna hear an awful lot of bad words on the battlefield of World War 3 in oh, let's be generous and call it five more years, and if we're lucky enough to make it through that as a species, his grizzled, veteran leadership will be invaluable leading a cadre of freedom fighters against SKYNET when the AI inevitably turns on us. But not if you're gonna coddle his dumb ass now! Remember, it takes a village to berate an umpire to raise a child to save the future by killing robots back when baseball was still a thing. [caption id="attachment_1798" align="aligncenter" width="300"] 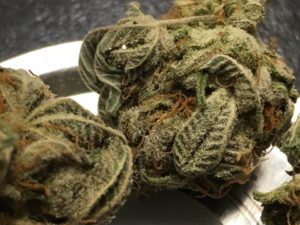 Bubba Kush[/caption] HighFocus is raising the flower game for delivery in DC with these locally grown, lovely fresh greens. It's far too early to say just what will result from the grand experiment of Initiative 71, when the city decided to thumb their noses at Congress, recognize that cannabis enthusiasts & patients alike are citizens, not criminals, and implement legalization without regulation. Cannabis of this caliber is an encouraging sign that the District could one day be as well known for its marijuana gardens as California or Amsterdam. From one Gentleman to another, you owe it to yourself to give HighFocus a shot.