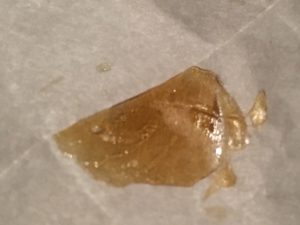 The partners at District Greenhaus stand out among our local extraction artists.  These guys have a firm commitment to quality and it shows in the clarity, stability, and fragrant terps of their dewaxed shatter.  I sat down with them to find out more about their process (interview soon!) and walked away with a small sample of a recent nug-run batch to try for myself. This is actually the second time I've had their stuff- they were Entry #12 of our local Secret Cup and came in fourth- which would make them the highest ranked local hashmaker in that competition. I took a big whiff of the amber in the parchment and was rewarded with pleasant earth tones and a berry-like sweetness.  I loaded my ceramic-bowled waxpen with a conservative dab.  The head rush was immediate, but after a few minutes, a big, soft cushion grew behind my eyes, spreading around my head like a...nice, fluffy...pillow. So this strain holds the distinction, along with something the kind host at Tetra Hydro Club in Rhode Island tentatively called Blue Moon Rocks, of being the only concentrates I've had that actually put me to sleep.  It wasn't the fuzzy, staticky feeling in my brain I get from smoking Blueberry or Purple Trainwreck.  Nor was it the full-body relaxation of Critical Kush.  It was a gentle, but unyielding, psychic exhaustion that didn't linger after my nap.  When I woke up, I realized I hadn't got the name of the strain, so I reached back out to the Greenhaus to find out what had got the better of me in the middle of a Sunday. 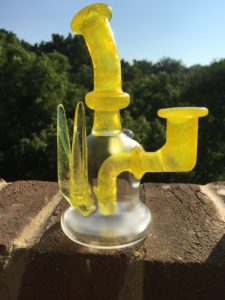 Purple Haze.  Excuse me while I kiss the sky!  That's a name with some weight behind it.  Immortalized by the masterful Mister Jimi himself, this classic sativa loomed large on my strain bucket list. I tried it again earlier in the day along with my favorite Illy coffee and that did the trick, propelling me along a heady, insistent riff of creative focus that I greatly enjoyed.  I took some dabs from my sweet new Lemon Drop oil rig on a different afternoon, again around the time when my bio-rhythms are in their nadir, and confirmed the earlier result- it was back to bed for me. I've always got a place in the medicine cabinet for an effective and consistent sleep aid and I'm grateful to scratch another famous strain off my bucket list.  Hats off to District Greenhaus, they did a fantastic job with this concentrate!