HighSpeed is easily the most visible of the DC weed delivery companies outside of Kush Gods.  There are, just, so many articles about them right now.  Here's one in the Washington Post.  And here's their spot on Fox5 News.  David Umeh brought his delivery company from Oakland to DC to take advantage of Intitative 71 and reposition the company as a juice delivery start-up that serves up gifts of cannabis.  So, I bumped them up the priority order so that someone from the cannabis community (me, natch) can judge the hype, since the mainstream news is all like "ohmagerd they brought me pot, thas amaaaaaazing." The site is easy and intuitive to place an order, but lacks an FAQ.  They claim delivery hours from 10am-10pm every day.  Just pick your beverage, then choose whether you want just your juice, juice plus Love ($55), or juice plus Lots of Love ($150).  Insert joke of your choice about the cost of love here.  Moving on, those are the delivery prices, they've also got On Demand for a little more and there's a Pickup option, too.  I chose the Charcoal Lemonade, which sounds like the most masculine lemonade can get, short of filling the bottle with live piranha, and entered "Sativa preferred" into the Note section of my Delivery on Sunday afternoon.  I promptly received an order confirmation with my credit card payment, but had no idea when to expect my delivery. An hour goes by and I decide to dig a little deeper.  That's when I find their Facebook page has several messages from customers asking when they'll get their deliveries- some claiming it's been weeks- and I realize I may be in for the long haul here.  Perhaps they're closed for the Labor Day holiday, I think, though they failed to make mention of it on the site or on Facebook.  Abandoning any hope for delivery today, I resolve to follow up with them on Tuesday. Imagine my surprise when I find an email from them the next morning stating I could expect my delivery on one of two afternoon routes, apologies for the delay due to some kind of site update, and Happy Labor Day.  It also mentioned that the driver would call ahead, in case I needed to change the address.  I got another email at 12:38pm stating my order had shipped and figured that meant it would be on the earlier, 1pm route. As it turned out, I had time to go to the Greenlight Festival, enjoy the opportunity to catch up with folks and meet some new faces for an hour and a half, then give an incendiary speech about my vision for the future of cannabis in DC in a Festivus, list-of-grievances fashion to a large crowd.  The whole thing went by in a bit of a blur for me.  The main microphone was off and I couldn't remember how to turn one on, it had been so long since my band days.  The MC kindly offered me one of his, and as I went off on the kind of rant you expect when you book the Gentleman Toker to your event, he actually chimed in to boo and cheer at points.  That was not rehearsed and shockingly awesome.  Some people even clapped at the end.  I'm Entertainment, baby! I still hadn't received a call from the driver by the time I got home.  Nor by the time I had ordered and eaten a victory pizza from Arcuri's (easily the best delivery pizza available in the Tenleytown area).  I waited until 6:30pm, then sent an email to the contact address provided inquiring as to whether I should still expect it today.  No response came, but an hour later, I got a call that the driver was downstairs. I was handed a juice- Pineapple Apple Mint, definitely not the Lemonade I ordered- and their branded, green paper bag.  I gave it a quick squeeze, was satisfied there was bud inside, thanked them and went inside for the inspection. [caption id="attachment_583" align="aligncenter" width="225"] 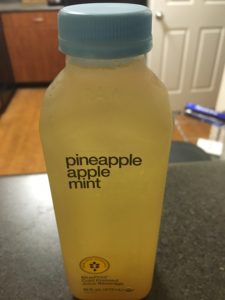 Pictured: Sadness.[/caption] No strain was listed anywhere on the package which is a big red X in my book.  I want to know what I'm smoking and, considering the giant publicity effort that's been made, I'm surprised they aren't branding their cannabis as a marketing tactic, but maybe that's because the bag appeal was meh.  Small, light green buds, a bit stemmy, and quite dry.  After a day in with the Boveda, they haven't propped up much at all.  Negative on trichomes.  It did have a light, earthy scent that, when magnified by grinding, is rich and pleasant.  The smoke is a tad harsh but not bad. It's an indica-leaning hybrid that reminds me of OG Kush but the head stone is heavier.  This thought-jamming anxiety reliever and mood enhancer helped me kick back and enjoy several hours of binge-watching, alternating between  Supernatural Season 9 and Legit, the short-lived FX sitcom from Aussie comic Jim Jefferies.  I finally took Netflix up on the suggestion and have to say I'm really impressed with how much heart and plot is in this hilarious, raunchy comedy that features plenty of his most popular stand-up bits.  How did this show get canceled? [caption id="attachment_585" align="aligncenter" width="225"] 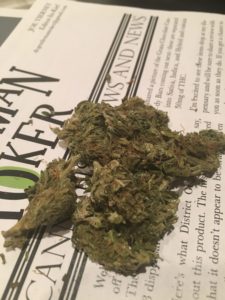 Smokes better than it looks, but what it looks like is mids.[/caption] Speaking of canceled- I would definitely not repeat with HighSpeed.  Clearly, it is just now hitting the mainstream (yoohoo, over here, sailors!) that cannabis delivery in DC hasn't gone away and all this press coverage has led to an influx of orders that they are unable to keep up with.  Heck, I checked their site an hour ago and they were totally out of stock again.  Do they really expect customers to hang around for days on end, and then after sending a shipping notice, six and a half hours to receive a delivery?  There is plenty of competition out there- heck, there's another company that even delivers juice- and small, dry, unlabeled nugs provide no reason to wait around for these folks to get their act together.