Ladies and lame, stupid boys (yuck!), it is my pleasure to introduce you this evening to one of DC’s most D fucking C brands, an important voice in Washington’s cannabis community almost as funny as YT (but much better liked. I tend to piss people off, can you imagine?), and all-around awesome folks, Dope Uber.

They were at the very first marijuana event your Gentleman attended, albeit in a different capacity, and have been a consistent, positive presence throughout Initiative 71’s brief, chaotic history. We’re lucky to have ’em, and now that their signature edible, the Soufeast Ratchet Cake, is available for delivery as well as pop-ups, it’s well past time my favoritest friends in the whole world get to hear about ’em. That’s you, Snookums! I got Eskimo kisses for yo- ok, too far. Yup. My bad. Totally misjudged that.

Soufeast Ratchet Cake. Sweet baby jeebus. I promise I’m not making it up. I’ll explain the humor for my audience unfamiliar with the city. Southeast is a historically black, impoverished quadrant of DC. Not too many years ago, there was a lot of crack and a lot of violence. It was like how Baltimore still is, but probably less heroin.

Fun story, there was a strip that you could roll down in the day and buy a nickel or a dime bag from your car, but this was considered dangerous for young whiteboys, even ones in camo jackets and Tims from over the bridge in Temple Hills. I convinced some friends with a car to head over anyway cuz Daddy needs his medicine, but we missed our turn, and after pulling a U, we were pulled over on suspicion for being in the neighborhood.

So we went home to get our kneepads and came back. Holla! I’m joking. See? I told you this story was fun.

And a ratchet is…well, we don’t slut shame here at GTHQ- quite the opposite, in fact (ladies)– nor do we support it, so I’m not gonna link to Urban Dictionary. It’s what you’d call something bad, of poor quality, or ugly, often used in reference to a woman. Sigh. Do I have to explain all this? Remind me to give Dope Uber an earful about how goddamn terrifying this tightrope they’ve asked me to walk is. I don’t want to get Twittered at!

So anyway. You buy their sweet swag- like the T-shirt or lunchbox below- and get some Ratchet Cakes. Side note! Y’all realize that this limited gear from this unique time in history might be worth something to a collector one day? I mean, even if our society doesn’t survive the Illuminati’s secret flouride injections and chemtrails, a lunchbox will definitely hold up long enough for Antique Robot Roadshow’s ancient human expert to determine it’s worth a kajillion blorknoks, give or take a blork. 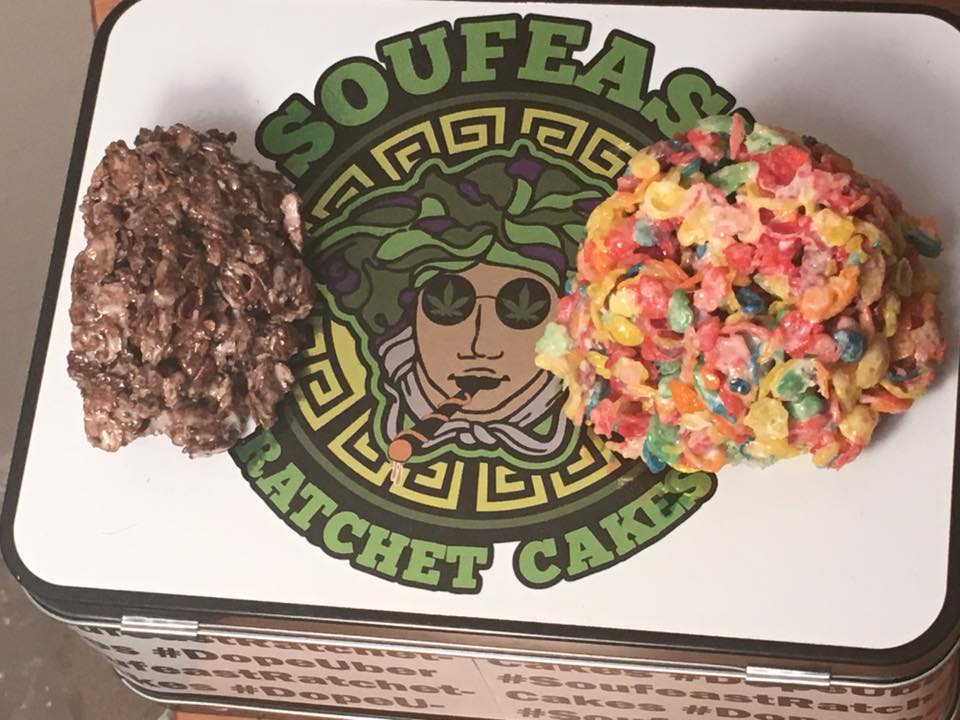 Plus you get a Soufeast Ratchet Cake! I got two- the standard SRC is a Fruit Loops kinda cereal bar…err, lump…and clocks in at 100mg, give or take a blork (I’m not gonna get tired of this joke anytime soon, folks).

Your Gentleman also got a special, limited Cocoa Puff bar that was roughly 50mg, give or (you can mentally insert the rest. That’s what she said. HA! Jinx!) The secret ingredient is love. Love and distillate.

So I chowed down on both and settled in to watch Guardians of the Galaxy 2 on Netflix. I don’t go to the theater much cuz I’m not a fan of paying $70 for a movie, popcorn, and the chance to be a sitting duck for the next maladjusted fuckboy with a grudge and a gatt, and I tend to get paranoid on edibles in any case.

But at home, from the comfort of my couch, I can enjoy my Ratchet cakes in a peaceful, happy mood, laughing easily at Marvel’s lovable cast of extraterrestrial miscreants, and for about another hour past the running time at nothing in particular.

Of course, after 150mg of cannabis, the Gentleman always gets a solid night’s sleep, and this dosage is perfect for waking well-rested. Much more and I tend to zombie through the next day. I can certainly recommend you try a Soufeast Ratchet Cake from Dope Uber for yourself!