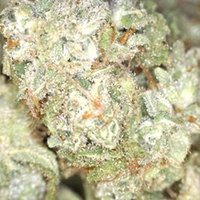 Veterans of DC's MMJ program will know this strain well. It's one of the oldest in Holistic Remedies' lineup and they've made several different concentrates from this plant- I've bought it as flower, hash, wax, and crumble. This plant usually goes by the strain name LSD. I understand why they changed it, but it's easy to see how it earned its original moniker.

I really like Merry'n'Berry but it's not my go-to strain for day to day use. I find this sativa-leaning strain extremely useful but for two very specific purposes. First, it enhances my ability to visualize concepts greatly and thus, my creativity, as well. It is not uncommon that my mind's eye is seized by sudden inspiration while under the influence of MNB, sometimes presenting an image, other times an entire scene. I can also attest to its assistance while reorganizing the furniture. I highly recommend trying this strain to anyone interested in pursuing physical artistry, like sculpting, choreography, or painting. I expect you would find interesting results from using it while practicing yoga or tai chi. Its second strength, and where I find it's greatest medical use, is with social anxiety. This strain is too loud to hear yourself think, exciting, and euphoric- so long aspositivity abounds with those you interact with. I find myself conversing, if not with ease, then at least gladly, but it comes with the mixed blessing of reducing the strength of my speech filter- in other words, I find myself saying weird stuff to people. A word of warning, I have also found that negativity from others is enhanced and extremely difficult to take in stride while under MNB's effects, so beware the company you keep at that time. That's a nice way of saying that I flipped out on someone while trying to make do with this crumble instead of one of my go-to's over Christmas. Family, right? Can't live with 'em, can't change your name and run away forever in case you need a kidney later and they say "I don't know anyone by that name," while shutting the door in your face during a mid-winter blizzard twenty years from now and you turn around to leave but those damn little drifter nano-robots stole your hovercar wheels and the aneurysm begins as tiny, microscopic bubble just as you realize that freedom from obligation is just another cage alright, ALRIGHT! Dammit...I'll bring the eggnog this year.