The Gentleman stopped by Herbology back on 4/20 and procured a flight of four nugs from the Maryland medical marijuana grower this Gaithersburg dispensary is vertically integrated with, Grassroots. I was so pleased with the flowers I had to show off their pretty Chem de la Chem. Now that the product line has expanded to wax and RSO, it's high time we got to a full writeup, eh? Since my initial visit, they've introduced deli-style flower ordering, which means the buds are pulled out of a large jar and weighed in front of you. Herbology takes it a step further with a tier of weights I've never encountered before. You can still get standard grams, eighth- and quarter-ounces, or you can spend a few bucks more to get a Prime (1.3g), a Fin Diesel (3.9g). or The People's Quarter (8.1g). I'm all about more value, baby! Okay, so the flower we're going to review is Mambo Sauce and for once, it's the Gentleman himself that has the skinny on the genetics, not any of those other sites. This is me raising my head so hard I'm shaking the desk over here. ME ME ME I KNOW THIS ONE PICK ME!!! Alright, I don't know what it's actually a cross of, but I know where it came from. Head shop Myster brought over a breeder to create some exclusive genetics when I71 kicked off, and Mambo Sauce was one of the DC-inspired strain names they came up with (Crystal City was another), which Myster then gave away for free to promote the store. Seed shares were all the rage in the early days of I71, hours-long waiting to get your hands on seeds most had no idea what to do with, mostly hoping that one of the proto-gifters would show up with half-grams of flower stapled to a business card. I think it is infinitely cool that you can find Mambo Sauce in the dispensary now. "Started from the bottom now we're here," as the poet Drake once remarked. 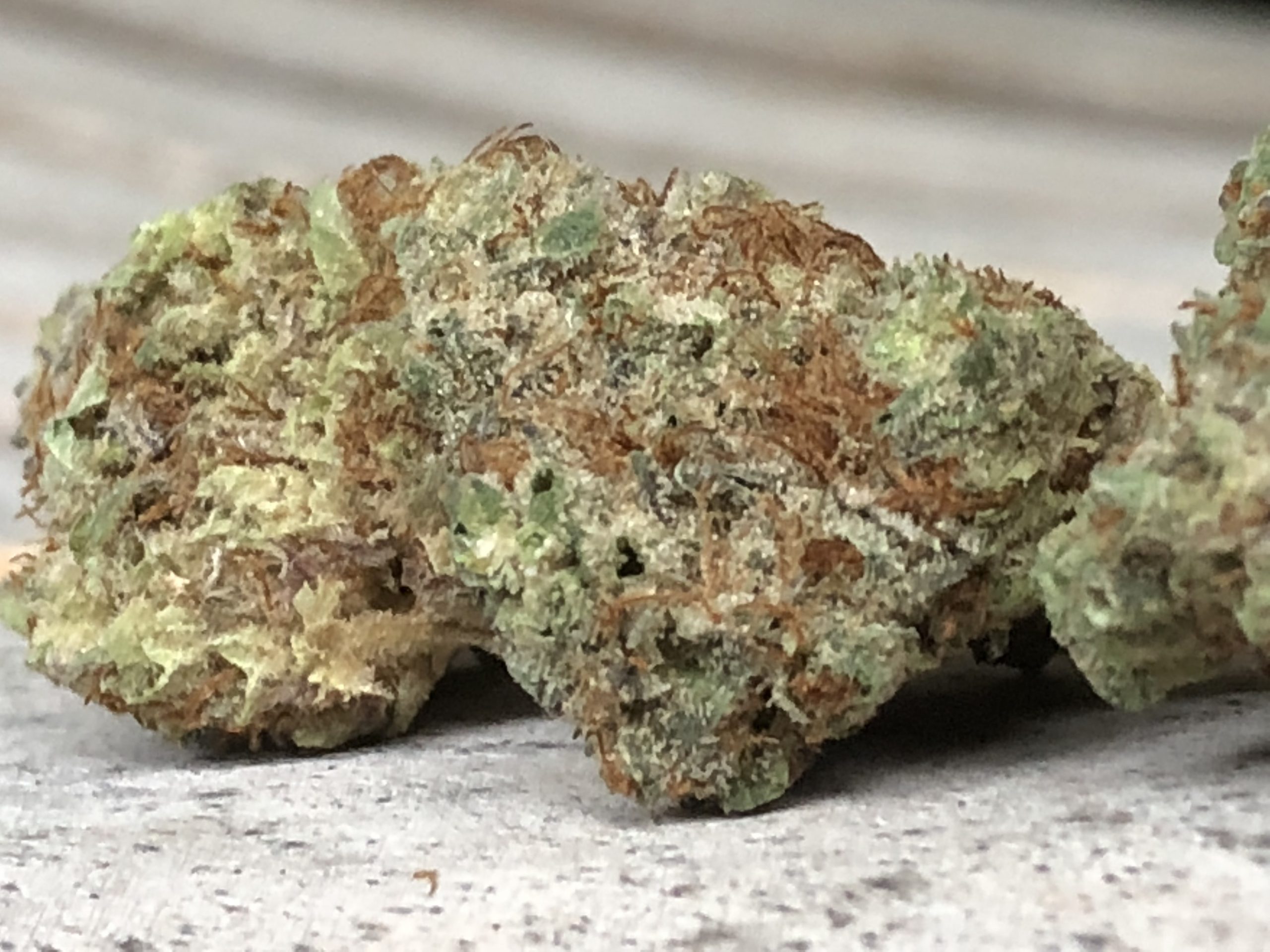 My Fin Diesel from Herbology contained several small-to-medium sized nugs of ideal density- not brick-tight, not larfy, these fresh cannabis flowers grind with moderate resistance. The Mambo Sauce buds are a pleasing green covered with small, but visible, trichomes. I find stems, popcorn nugs, and sugar leaves in my pre-packaged purchases at a fairly high clip, somewhere north of 50%. You're not gonna find these issues with deli-style ordering unless your budtender hates you and you're not paying attention. Do you wear a beret, perchance? Or actually say 'perchance' out loud sometimes? Look, I'm just trying to help over here. Assuming all else is equal, a Gentleman will always choose deli-style over pre-packaged flowers. Moving on to the best bit, that Mambo Sauce aroma! I've never had flowers that could be described as savory before, like they should be ground up fine and tossed on a T-bone. Even better, that incredible flavor rolls off my tastebuds with each exhale of this supremely smooth smoke. Full marks.

Grassroots' Mambo Sauce leans significantly towards the Sativa end of the cannabis spectrum in my experience. It's primary effect is body activation- I don't feel restless, hopped up, or like I've tapped some wellspring of chi after smoking, I just start moving and keep moving. I smoke some Mambo Sauce and get my chores done, my stretching in, and take a brisk walks around the neighborhood, not out of motivation, that rare, undependable bird, but simply because I'm up for it and have nothing better to do. This flower also provides adequate anxiety relief. My mind's quiet enough that I can focus and cogitate with some effort, but if I don't, it's like my brain-radio is set to scan mode, picking up random thoughts and losing them moments later. 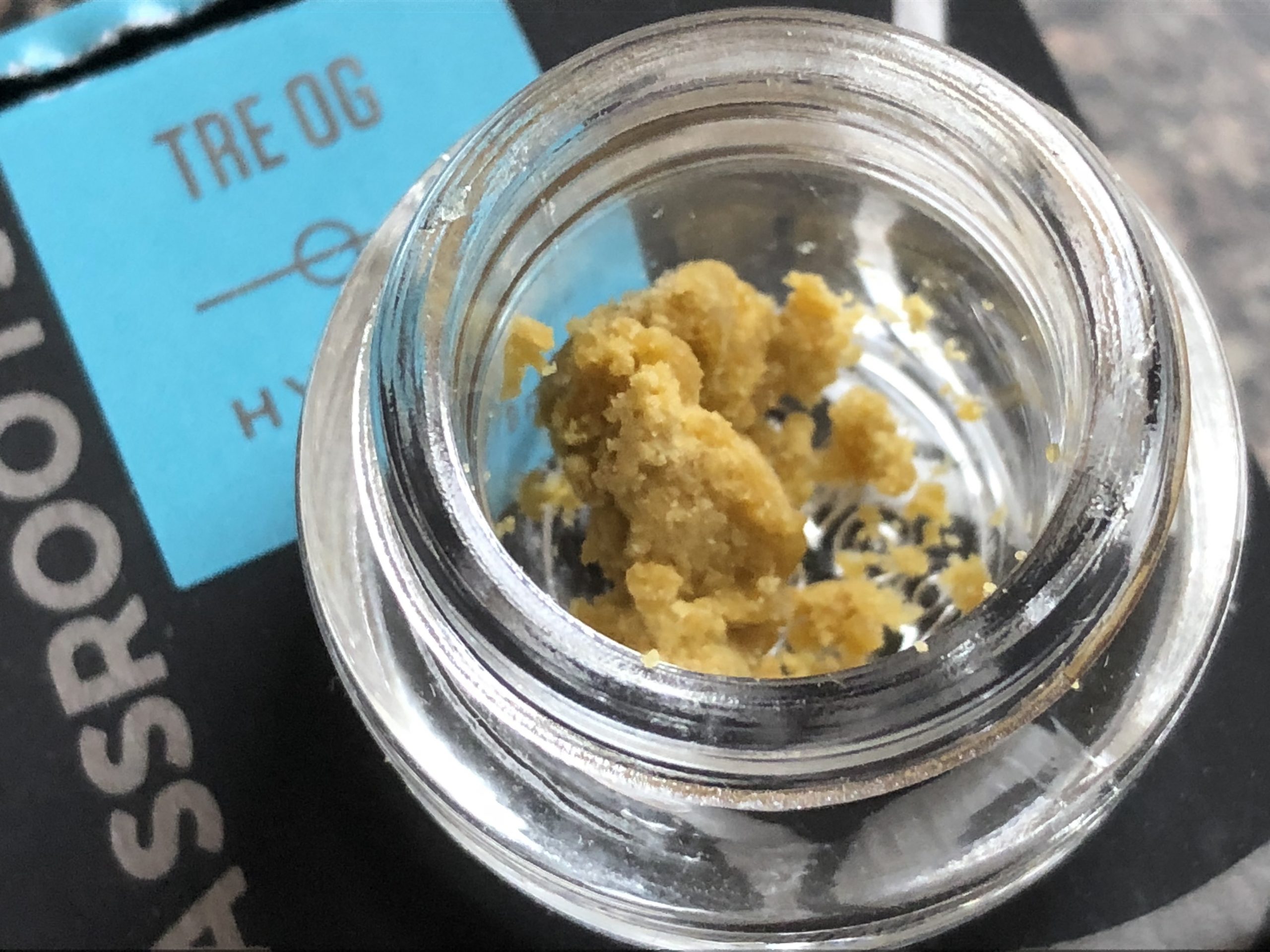 Grassroots had also just released their line of extracts, on sale for $60/g, so I picked up some Waltz Haze Sugar Wax and Tre OG Budder. They don't look that great, the Waltz Haze in particular an unappetizing brown, but they both dab smooth and have a clean, earthy flavor. They're decent. (Newer Grassroots concentrate is awesome- future GT in 2019) 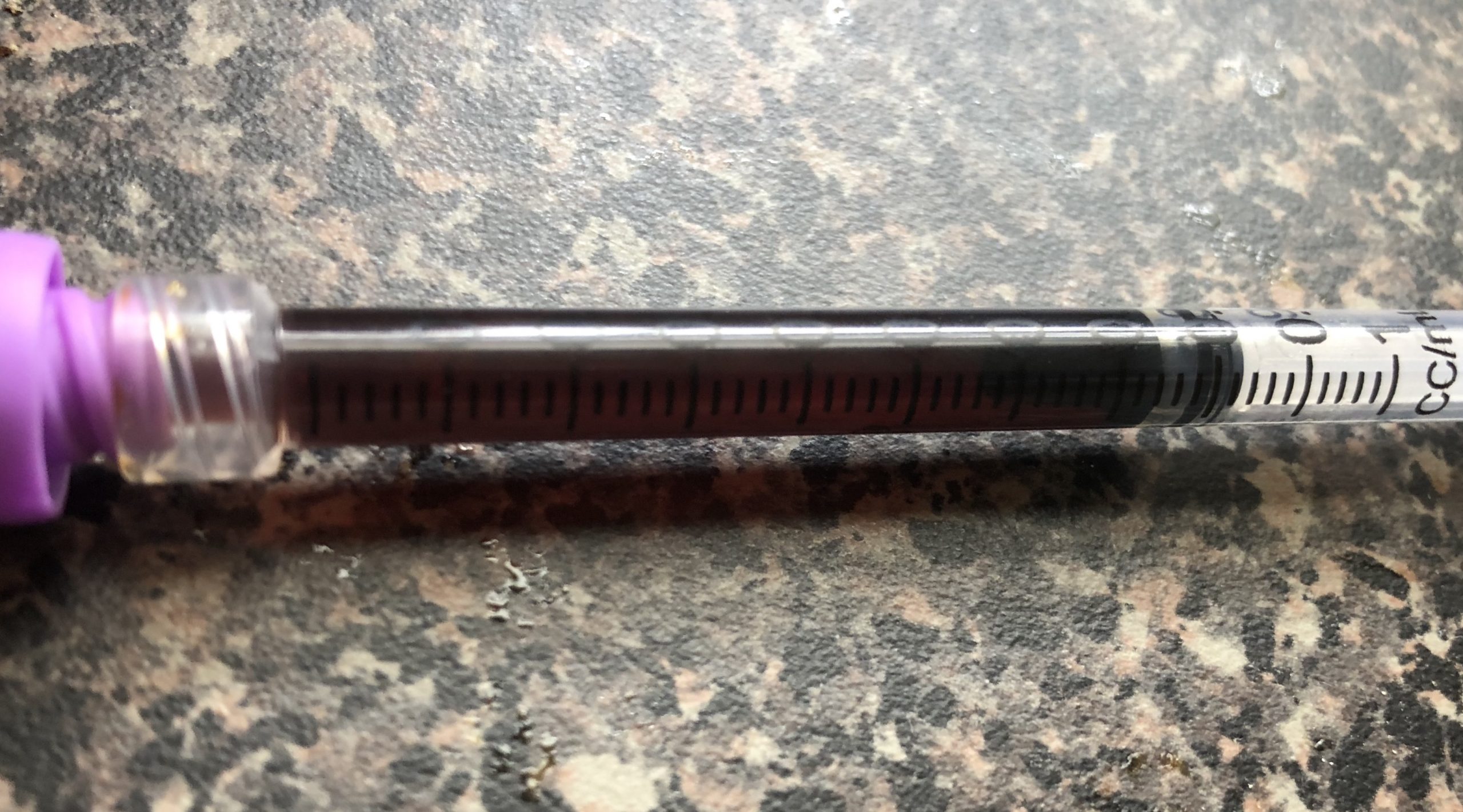 Now, what is exceptional is Grassroots' RSO (Rick Simpson Oil) also known as FECO (Full-Extract Cannabis Oil). On the frontier of modern marijuana medicine, RSO is crafted by shoving the entire plant, roots, stalks, the whole shebang, into the extractor. What comes out is a dark oil jam-packed with cannabinoids and terpenes and, like, compounds, I don't know. As I've said before, I'm no science bitch, but basically it's like the Whole Foods version of dabs that are also edibles somehow or whatever. Anecdotes abound online of its miraculous healing powers, often to help fight- claims even exist of curing- cancer. I actually met someone with severe, chronic pain recently who told me RSO was the only thing that got them out of bed. The couple times I found it in the past, the stuff was jet-black and tasted brackish. Grassroots RSO is a horse of another color, specifically, dark amber. I got the Appalachia (indica) strain and it is my new favoritest thing! It has a wholesome, full-bodied, natural flavor when dabbed alone but a little drop is sufficient to turn your plain preroll into a super-potent caviar joint for when you're feeling boujee. Appalachia's effects are absolutely euphoric. Somehow 'Safety Dance' made it onto my rotation right after my morning dab and I lost half an hour down a YouTube laughing myself stupid at over-the-top videos from which I could not pull myself away until watching the full-video version of Outkast's 'Roses' and I'm still cracking up about it days later. No Speakerboxxing! And definitely no The Love Below! OMG just stop, it's too much. So that's a big ol' yes from the Gentleman on Grassroots' flower, RSO, and their vertically-integrated dispensary. If you have a medical card, swing by Herbology and get it served to you deli-style in a weird hipster weight you can giggle about over imported IPAs later, beard-waxer. If you don't have a medical card, my pals at Veriheal can help you out- more info for ya right here. Oh! And please sign up for my newsletter.