If you're looking for a legit tour of Washington, DC, that just so happens to be 420-friendly, then you're in for a treat, kitty cat! I joined one of Lucky Chuckie's Tours last week and was mighty impressed. Despite living in the DC Metro area my entire life, the city has grown rapidly over the last two decades and Dobby hasn't had a chance to visit all the new stuff yet! My guide was knowledgeable, my driver professional, and the weed gifts? on point! Shall I elaborate? Very well. Insert a shot of this cufflink adjustment before we drop the beat on 'em.

I met my ride just north of Dupont Circle, but they'll pick you up at your hotel or wherever. The large white van smartly lacks any branding that might cause undue attention, even if I feel a bit Dexter-ish writing that out loud. I'm definitely not being held captive in Lucky Chuckie's van until I finish this review. Have I mentioned how roomy and clean it was? Even the ashtray had been sanitized prior to my trip. For everyone's safety during the pandemic, we all wore masks, and a plastic screen hangs between the front and back seats. You'll also be glad to know the climate controls performed admirably.

Smoke Weed on the Tour!

After introductions, I was offered birthday cake cookies infused with Purple Banana cannabis and a large, natural leaf pre-roll that I was welcome to enjoy on the ride. The flower was a mix, but predominantly Lindsay OG, and was a surprisingly smooth smoke. I'd finish all of them eventually, but only made it through half on the tour because I had neglected to bring a drink with me, and didn't want to start coughing in close quarters during Covid. That's really my only suggestion for improvement in this review— everything was fantastic, but could have used a bottle of water.

I got some more pre-rolls to enjoy later and took the cookies home with me. You can eat yours during the trip if you want to, but unfamiliar edibles can be an unpredictable beast. In this case, I ate one cookie (approx 150mg) and felt the effects about 90 minutes later. Then I smoked a bit to really set off the intense, bright buzz of flower-infused edibles. As opposed to the more common, distillate-based edibles, which tend to feel heavier. There's a thing I'm gonna get into about how smoking has improved the efficacy of my edible intake immensely and that, yes, you can totally feel the difference, but we don't have time to get into it now. NO, WE DON'T.

Oh! Before I forget, they also give you a menu of additional cannabis gifts you can get from Lucky Chuckie before the end of your ride. Arrangements can also be made to have specific gifts waiting for you at the start of your tour, just ask for a menu a day or two in advance. For couples tours, you've even got options to add rose petals, chocolates, and wine. Holy shit, really? I know where my waifu body pillow and I are celebrating our Anni this year! You hear that, Kagome? We're going out, baby!

The entire ride was just over an hour. The first sights to see were the National Archives and FBI Building en route to Capitol Hill, where we stopped for selfies in front of the Supreme Court. We drove past the other Congressional buildings en route to the Navy Yard and revamped Southwest Waterfront, which has grown even since my last visit to see Deadmau5 play The Anthem in late '19. My guide was sure to point out their recommended restaurants, breweries, and wine bars that now populate the strip.

From there, the route took us along the National Mall to see several Smithsonian Museums, past the Washington monument, the presidential Memorials along the Tidal Basin, on to our second stop, the Martin Luther King Jr. Memorial. I'd never been before. My guide pointed out the significance of his statue's placement, facing Thomas Jefferson's Memorial across the river with his arms crossed, questioning the brazen hypocrisy of a nation that dare claim all men are created equal by their Creator with their pen-hands while the other held the chains of their slaves. 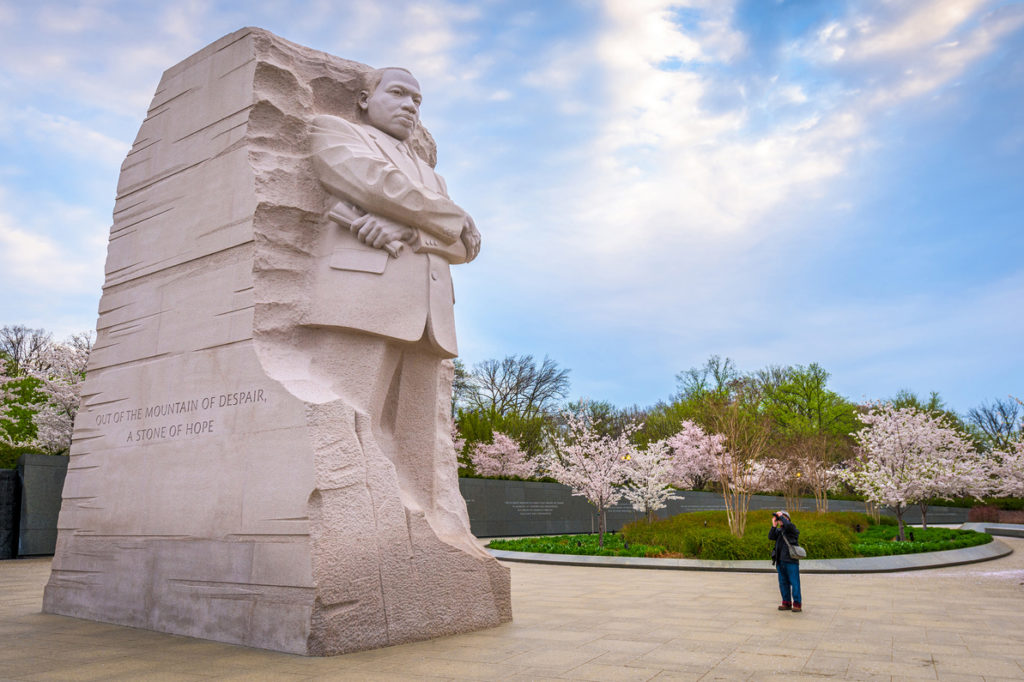 I was struck by the scale of the place. It felt to me not like a Memorial that is merely viewed, but one that welcomes you in and makes the observer a participant, much the same way that our veterans see their dark reflections in the names etched into the Vietnam Memorial. I also appreciated the trees and green areas that make the MLK Memorial a living, growing space. While hope for a reconciliation between our political allegiances may be in short supply in this post-truth era, we know that Americans like MLK persevered in the face of even greater odds, and perhaps draw strength from that.

Afterwards, we piled back in the van and drove by the Korean War and Lincoln Memorials, down Arlington Memorial Bridge to Robert E. Lee's home and turned around. The Gentleman's trip around DC was over, but yours could be whatever you want, since Lucky Chuckie will help you plan your own custom tour! Take your sweetie for a romantic ride around town or bring your whole Broadway Bro-down to see the sights (eight guests max). Just buy some motherfucking tickets already so they'll let me out of this van! You can find them online at LuckyChuckieTours.com. Please, I'm diabetic, and I'm worried about my cat, Princess Snookums, also very diabetic.