Okay, so I got to take part in the big #Trump420 joint giveaway put on by DCMJ and it was amazing. You've probably seen it like, all over the news, weed news, everybody's been talking about it. I didn't get to chat with any reporters personally, but s'alright- I had a hoot yelling at people to get out of the intersection and making sure their hands were marked as they came to the end of the line. Having arrived late, I was shocked to see how many people were lined up for a free doobie- I thought it must surely have been multiple protests with our shindig at the front. Nope. Wrong. All there for joints (generously donated by our local community of growers). In the end, around 9,000 total were given out. And done so safely, without any fights, without any trouble, AND some kind-hearted folks in our band picked up our little concrete island north of Dupont Circle. Hey, why don't you try giving out free beers sometime and see how that goes, prohibiti-arinos? After the giveaway, I walked down to the Mall to see the Inauguration of the first Angry Muppet President. I couldn't pass up the apocalyptic spectacle of walking down the closed streets, blocked off by heavy trucks and National Guardsmen. Dreary, overcast, but more than anything- it was quiet. Eerie. Those who walked with me, by and large, were not celebrants. I imagine many were, like me, present chiefly to bear witness. I heard some of his speech, saw his big red face on the monitor, & counted myself blessed to be at this crossroads in our nation's history. Since Trump's election, it seems to me that focus on the nascent cannabis industry has strongly shifted from the promised lands out West to the fetid, political heart of our Mad Nation. I mean, not for any good reason. But it is definitely exciting! [caption id="" align="aligncenter" width="300"] 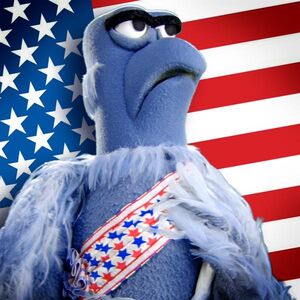 The only thing bigger than his talons are his crowd sizes.[/caption] Too much, in fact. I completely jacked my neck & shoulders up from the long walk and spent the rest of the weekend getting lit on the Edibles line from Initiative 71 newcomer DMV Organics.  When the good folks there mentioned they had cannabis candies for review, the Gentleman cautioned them that only heavily potent medicine would suffice for my tolerance level. They didn't blink. Several cool features about the overall line I want to point out! First, everything was packed in heat-sealed blackout bags that were sealed very tightly. You'll need scissors or a blade to open them, but it was great to see this level of care taken with the product. Second, each medicated treat was strain-specific, a very attractive trait for myself & fellow connoisseurs. The bags were labeled not only with the strain information & dosing information but an expiration date. Very impressive, very professional. 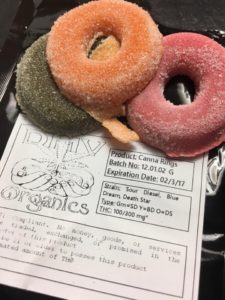 DMV Organic's Gummy Canna-Rings take it a step further- the candies themselves are color-coded by strain! What a neat, helpful idea. Each of the three sweet, sugar-crusted gummies are 100mg which is just about right for me. I went for the Sour Diesel first on Friday night, about 8pm. You can definitely taste marijuana, but not overwhelmingly so. Forty-five minutes later I was starting to feel the effects kicking in- an uplifted mood that slows your thoughts, and before it yielded fully to intoxication, I popped the Blue Dream for kicks. Fifteen minutes later, the first gummy hit the gas and I was laughing my ass off at Roger's maniacal antics on American Dad. I definitely couldn't concentrate on the pain radiating from my neck. The second, delayed gummy turned out to be a great idea- the evening's bliss was extended late until half past midnight. 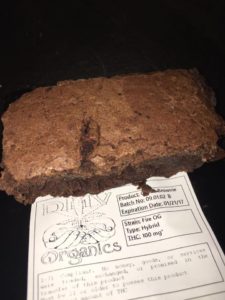 Then, ow. Ow ow ow. I was significantly worse on Saturday. Shoulda stretched more. I was going to head to a bar after the Women's March just in case some 0Nasty Woman wanted to take her pent-up Trump-stration out on a weird, quiet stranger, but this plan was out the door before 8am. I made my breakfast the last gummy, the Deathstar, because those things are delicious. When I wasn't feeling it much after an hour, I tossed the 100mg hybrid Fire OG Cocoa Brownie on top. The Gentleman is a psychonaut, not a food critic, but I thought the brownie was excellent. A perfectly palatable chocolate flavor, still moist after weeks in its pack, and held together without crumbling. DMV Organics boasts a true, trained chef- a claim borne out by the results. Right, anyway, the tag team of Brownie/Gummy overpowered my tolerance in another hour. While I didn't notice any strong muscle relief, that's because i was busy noticing how much like a spider the bundle of cords near the TV looked. With a glowing red eye, see it there? I realized how high I was when I insisted someone else take my seat so they could see it, too, and they politely declined. I resigned myself back to binge-watching and chuckling loudly to myself until I passed out sitting up on the couch. 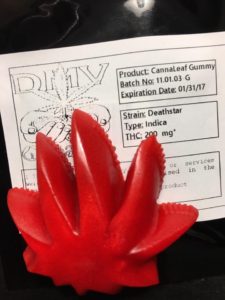 I saved the big, 200mg Deathstar Canna-Leaf Gummy for the late evening. I thought it might knock me out hard but all the edibles over the weekend had cranked my capacitors up a notch. I took the heavy dose in stride. The indica strain brought on a much calmer experience than their sativas & hybrids. The Deathstar edibles are more like getting stuck on the Lazy River than a rollercoaster. I kicked my feet up and enjoyed the excellent, mellow mood until it was time for a good night's rest. You're not going to get any work done on highly potent medibles, regardless of strain, but they did a heck of a job distracting me from my muscle aches and helping me reach the repair of sleep. DMV Organics walks on off the street and goes right to town killing it with these edibles. The thought and care that went into this line, the packaging, labeling, strain-specificity with color-coding- just wow. Combined with their high potency, they are a superior choice. This is what you'd expect to find at a dispensary out West, but made right here in Dank City. Very highly recommended. Make sure you Follow DMV Organics on Instagram and look for them around the DC cannabis event scene!