Emerald Cup is one of the longest-running and most prominent cannabis competitions in the world. I had a chance to visit their pre-award Harvest Ball event recently, a consumer-friendly festival on the Sonoma County Fairgrounds in quaint Santa Rosa, roughly 60 miles north of San Francisco, had an absolute blast, and smoked some insanely good weed. Wondering if it’s worth planning a trip to the next Emerald Cup Harvest Ball? Allow the Gentleman to present the highlights of the weekend for your consideration. 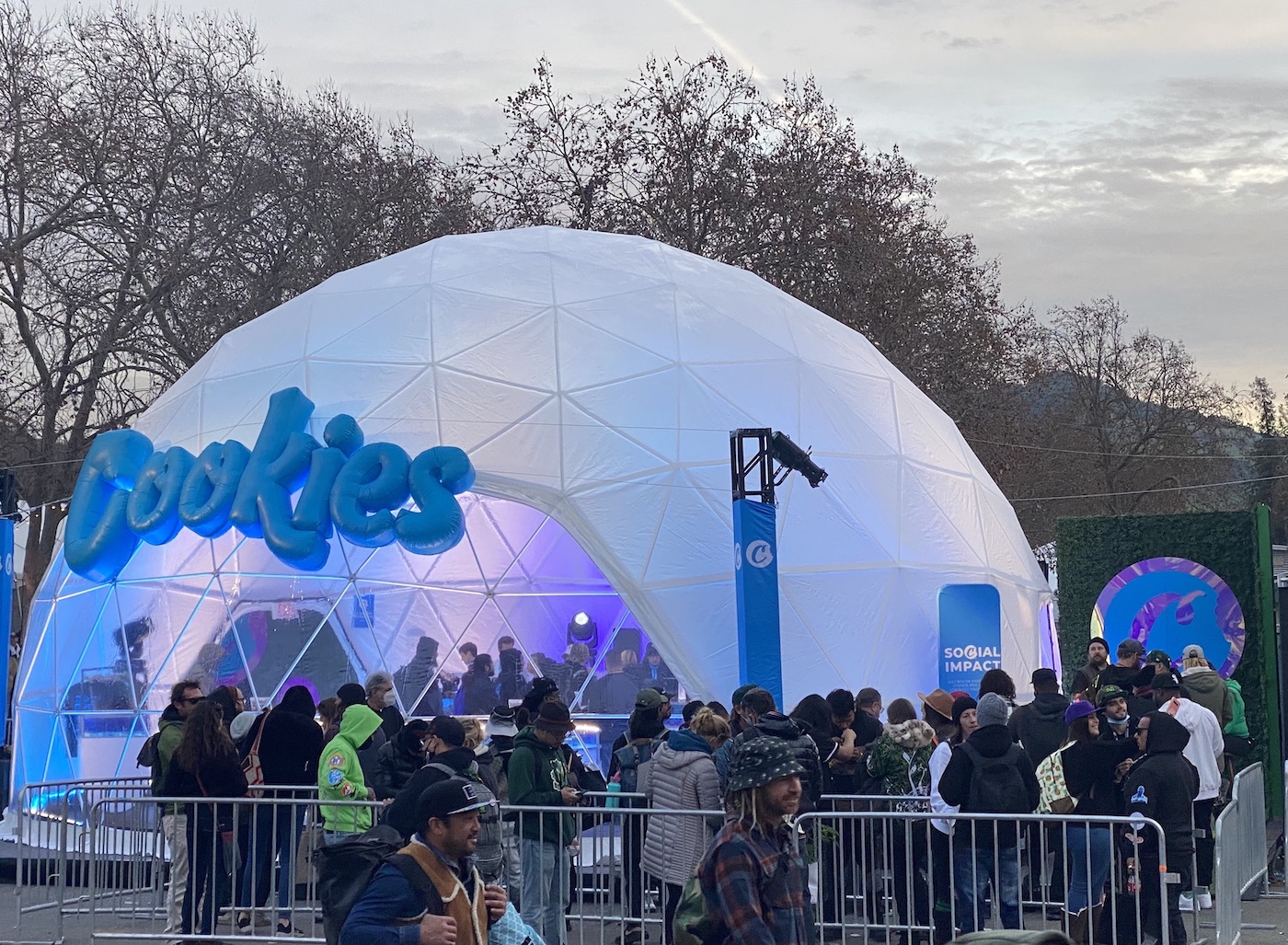 I watched with great envy at all the new baby weed parents, walking around with bags full of clones obtained directly from luminaries such as Humboldt Seed Company and Dark Heart Nursery. I felt like such a jelly monster poring over their menus, since my state doesn’t allow home growing yet (pouts in Maryland). Even the highly-sought Cookies brand had a seed drop in their tent! I found a couple of others that had finished flowers for sale, like the tasty Jokerz pre-roll I picked up from Compound Genetics, but the standout for me was Phinest’s Grapes and Cream flowers. 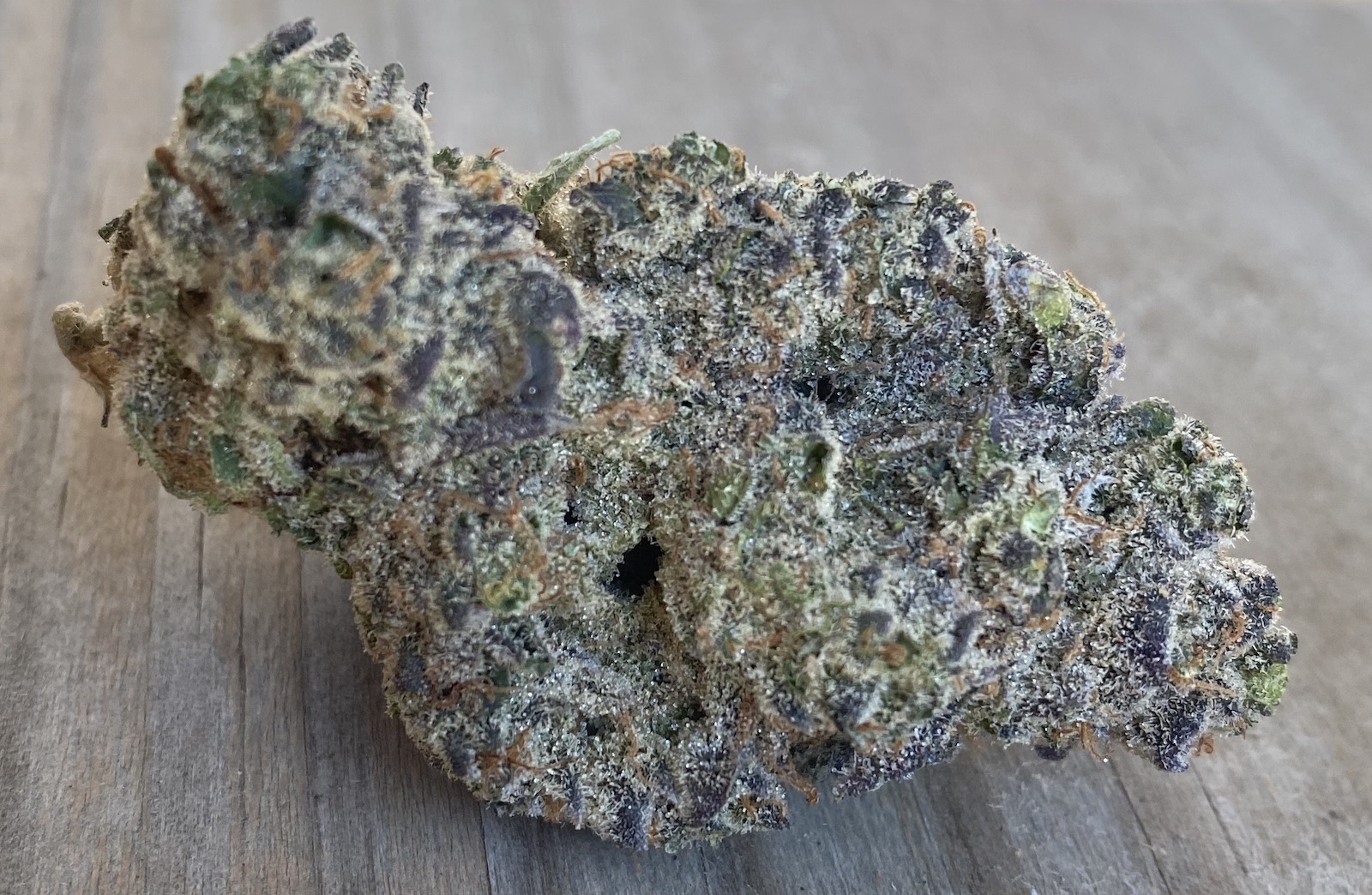 While Phinest Cannabis is winning awards for their Freshly Squeezed strain and its rich citrus aroma, my own preference leans towards Grapes and Cream, a cross between Grape Pie and Cookies & Cream bred by Cannarado Genetics. Cultivated from tissue culture, the scent profile for this strain is as-advertised, with an unmistakable head of fresh grapes and a smooth, creamy finish. The smoke is surprisingly light and easy for a flower that’s so heavily coated in sparkling, white trichomes. This indica sports an exceptionally well-rounded effect profile. I feel an organic relaxation spread across my temporal lobes after smoking, and the munchies arrive expeditiously, but it is by no means an overpowering, couch-lock strain. Grapes and Cream is flexible, going with whatever flow you got going, Matthew McConaughey's quintessence distilled directly into your bowl. Alright alright alright?

Not just a one-stop shop for cannabis growers, Emerald Cup’s Harvest Ball also brought together a ton of the hottest names in designer weed brands. Alien Labs, Connected, and Doja Pak all shared a large outdoor booth. I stopped by hoping to find some of the Hindenburg our reviewer Cyrus Montana checked out recently, but it was long gone by day two of the Harvest Ball. Cookies had this enormous, futuristic white dome in the middle of the festival that offered a next-level shopping experience. Menus were passed around the folks in line to whet the appetite, and once inside, we were assigned a budtender to walk around with us, answering questions, show me samples, and record my order- very smooth. My personal favorite, however, was the Blooberry Z I picked up from TerpHogz. 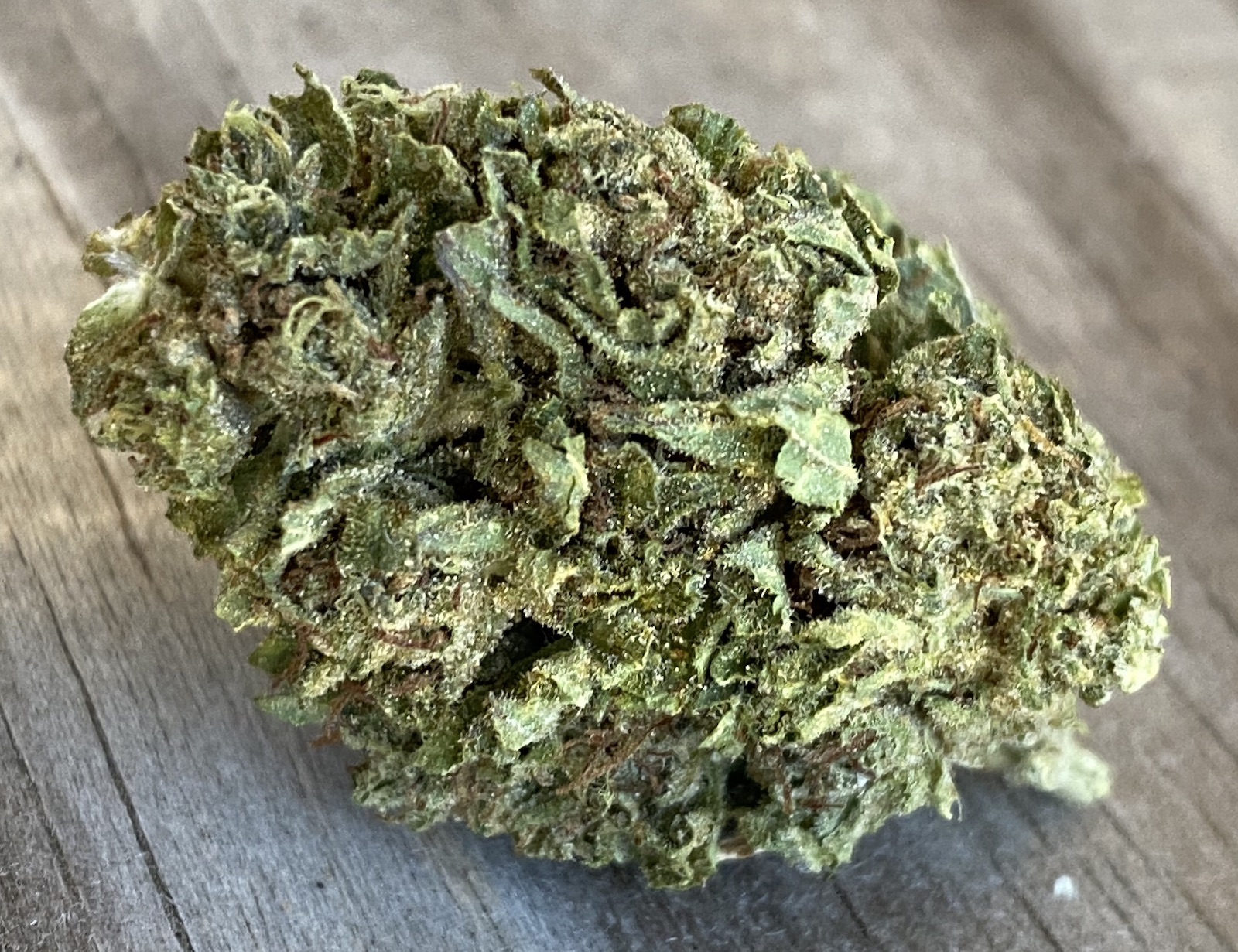 TerpHogz Genetics is the mastermind behind the uber-popular Zkittlez strain (now “The Original Z” after legal action by Skittles candy manufacturer, Mars, in 2021). The Original Z is now being used in a ton of breeding projects, like this Blooberry Z, that was recommended by their budtender when I asked for the most aromatic flower they had (no smell jars available). While the flowers aren’t particularly attractive aesthetically, the aroma of blueberries and candy most certainly is. That doesn’t carry through to the flavor, unfortunately, and the smoke is heavy, but not cough-inducing. Blooberry Z leans heavily indica and is best reserved for zoning out to the tube for a couple hours or an hour or so before you’re ready for bed. More lullaby than instant KO, the siren calls of Morpheus’ domain eventually grow too loud to ignore as you drift away across the cosmic ocean.

The vast sea of organic cannabis farms present at Emerald Cup’s Harvest Ball had your Gentleman purring like a walrus. There were organic brands scattered all over the festival grounds, but mainly concentrated in the Regenerative Farming section, including several Sun + Earth certified growers. Every time I stepped foot in there, I’d stop by another booth, smell some flowers, and inevitably take them up on their offers of sungrown eighths for $15 or whatever pittance they were asking for cannabis of such obvious quality. There were at least a dozen flowers worthy of review in this section.

True North Family Farms’ Pineapple Pez is remarkably resinous, smells just like the exotic delicacy for which it is named, and provides a bright, sociable high. Emerald Spirit Botanicals’ Pink Goddess, minimally processed to preserve its terpenes & trichomes, boasts a high THC-V content that creates an energetic buzz well-suited to productive endeavors. Arcanna’s Jedi Knight has a smooth pine scent and smokes like crushed velvet. Higher Heights’ Mendo Crumble is bold, skunky, and exceptionally potent. An extremely tough decision here on which to go with, but the Gentleman’s nod has to go to Moon Valley Organics for their Hindu Zkittlez. 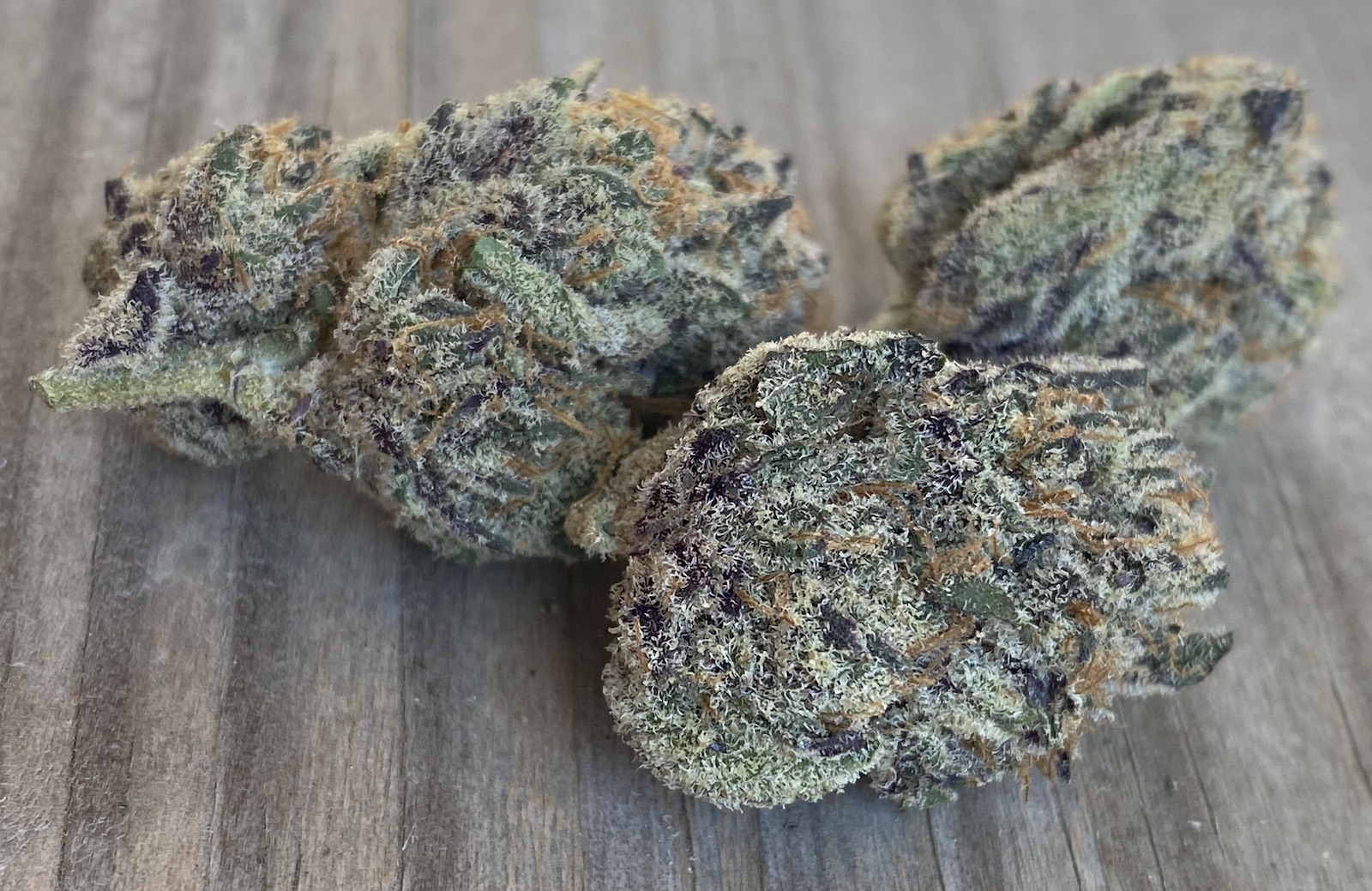 I actually met the indoor + living soil farmers of Moon Valley Organics at Hall of Flowers earlier in the week, but forgot to cash in my tickets for samples there. The lush fragrance of cardamom and sugar from their Hindu Zkittlez haunted me thereafter, and so the Gentleman resolved to find them at the Harvest Ball. Their booth was overwhelmed on Day 1 of the Emerald Cup festival and by the time I found them, this strain was sold out. Undaunted, I returned early on Day Two and caught them on the re-up! Hindu Zkittlez was also developed by TerpHogz, crossing The Original Z (BK3) with one of the most popular and distinguished landrace strains, Hindu Kush. I didn’t mean to make half this article about TerpHogz flowers, but take a gander at those certifiably thicc trichomes on Moon Valley’s Hindu Z! Like Fatal Attraction’s bunny-boiling stalker, they aren’t going to be ignored, Dan. Just as full-flavored as its aroma suggests, Hindu Z is a pure delight on every level. Predictably indica-leaning, the high is heady and calm, and I can feel my muscles and eyes relaxing as I sink deeper into the couch for a nap. A short one, I think, just gonna close my eyes for a few minutes. See ya in a couple hours.

What really made the Harvest Ball a special experience was immersing myself in the awesome vibe that the Emerald Cup has cultivated. You expect a pretty chill crowd when stoners congregate, but I wasn’t expecting that the dude who caught me admiring the large cola in his hands to walk on over and break me off a couple nugs. I wasn’t expecting the friendly off-road rescue driver I sat next to on the bench to hook me up with a couple more, nor my Uber driver to give me the buds that his previous ride had blessed him with, but couldn’t enjoy himself. These generous gifts turned out to be some truly fantastic ganja. 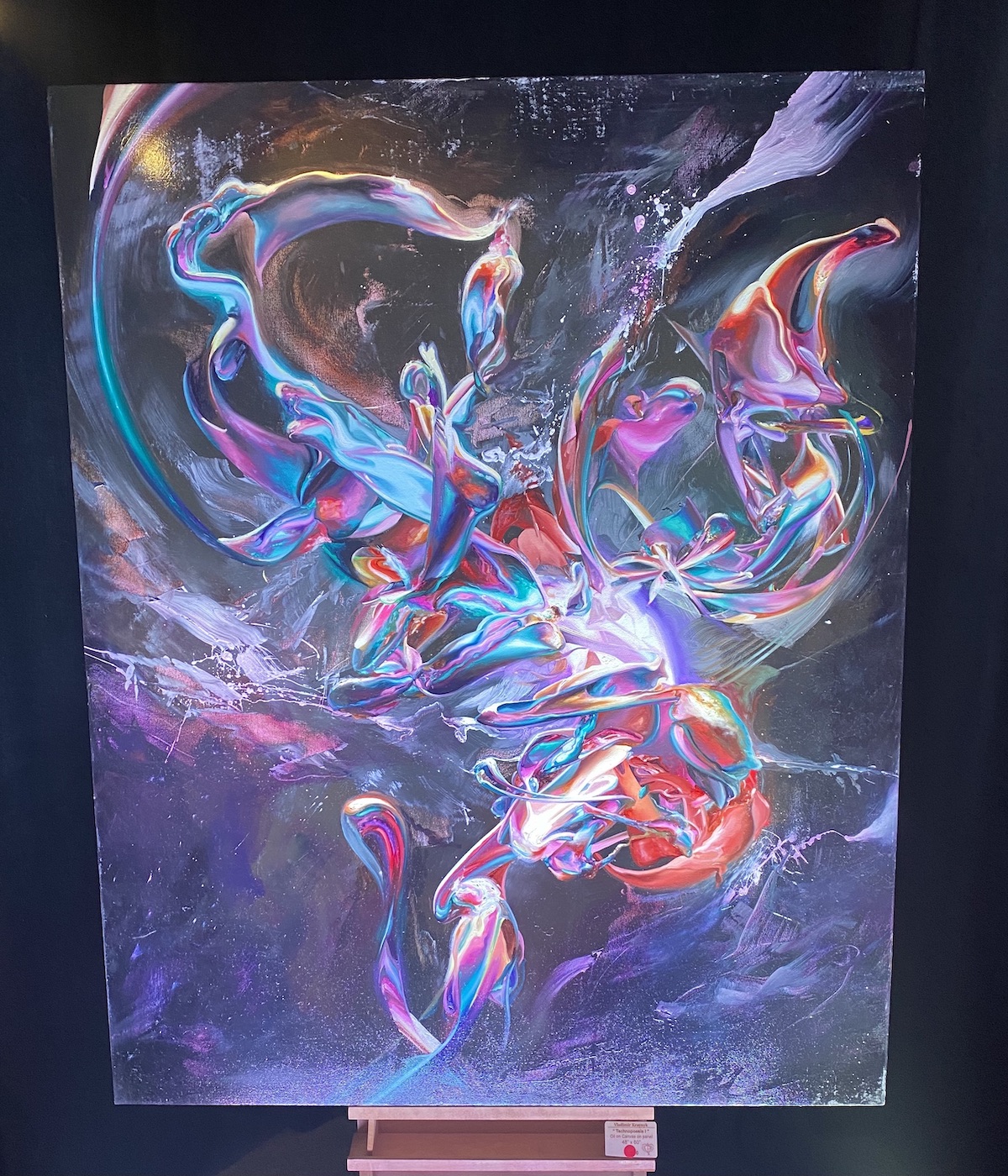 I thoroughly enjoyed the Psychedelic Art Installation presented by Phaneros. Technopoesis I by Vladimir Kraynyk caught my eye, a spatial genesis that masterfully balances vibrance and darkness, at once sharp and gelatinous, a bridge between beast and machine. I also lingered at Monica Star’s live painting session to admire her Akashic angels. I’d love to see this installation expanded in the future! And I couldn’t help myself from picking up one of the cool strain canvases from Califari, an art brand that recently expanded into retail cannabis sales. The Sunset Sherbert illustration is a gorgeous addition to my collection. 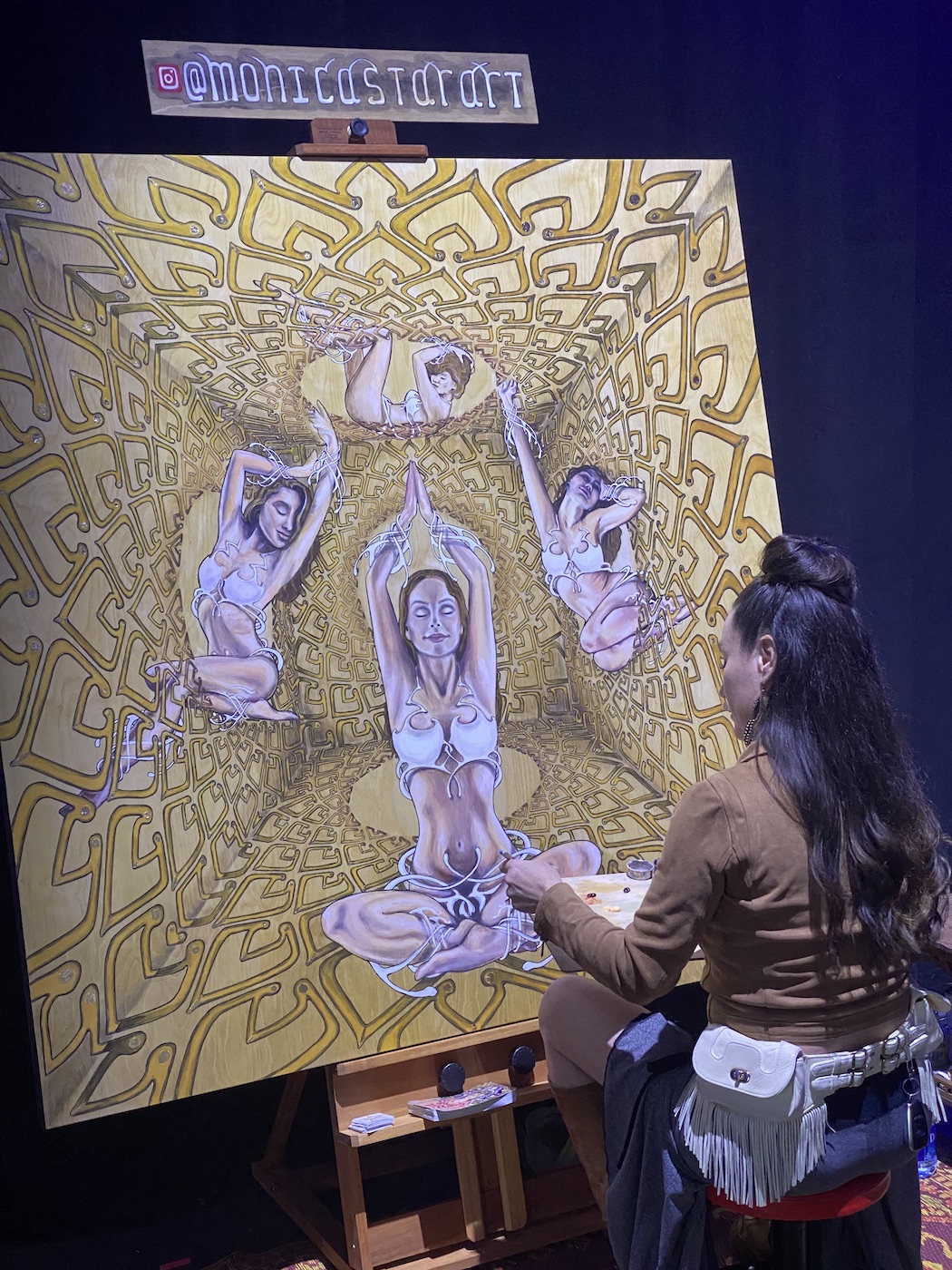 If you want to hear what cannabis culture and industry leaders have to say on a wide range of topics, you’ll find them at Emerald Cup. Mean Gene, Todd McCormick, and Ed Rosenthal hosted a discussion on today’s hottest cannabis genetics. Amber Senter and Rashad Johnson led a talk on how to empower social equity operators to succeed. I dropped in on Behind the Scenes session with a panel of Emerald Cup judges to hear how exactly the competition works and how it’s evolved since its inception, but stepped out for the chance to meet High Times’ strain reviewer and grow expert, Danny Danko. I was thrilled to meet the man who pioneered the path your humble Gentleman now treads.

And the music! I was excited to see a local band from Annapolis, Bumpin Uglies, on the Harvest Ball stage. I’d never heard of Mendo Dope before, a rap/rock band composed of Prop 215 growers from NorCal, but their passion to ensure legacy cannabis farmers are not left out of this growing industry hit a key I was feeling, considering the similar situation DC’s I71 brands are facing today. Dance/electronic sensation Big Wild closed out the Festival with an amazing show, bringing impressive energy to their dreamscape sound on the live stage with hits like Alley-Oop and 6s to 9s.