Have you ever been to a dispensary and seen the shake weed on their shelf? If you are curious why it is cheaper than the other jars, we’re here to fill you in all about it.

Shake is ground or granular weed, so it's basically just smaller pieces of bud. It's still good for smoking or using in edibles, but some people might not like it as much because it lacks the flavor and smoke profile of whole buds.

But at the end of the day, it's all about your budget and what you prefer. 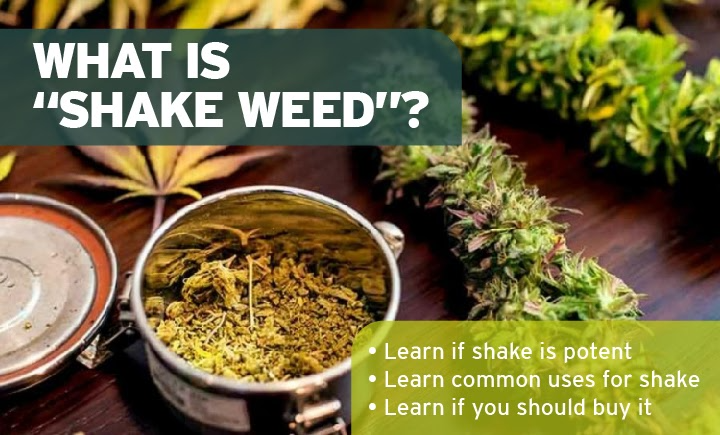 Shake is the accumulated particles of cannabis flower, sugar leaf, and trichomes that come loose during trim, packaging, and transport, but can also be ground from small, hard-to-market buds. Shake is cheaper for this reason, but can still be effective.

If you're looking to save money and still get a good high, shake might be your best option. Still, it is best to know what you’re buying and smoking.

In this article, we’ll tell you all about shake, a popular, cheaper option for your cannabis stash.

What is Marijuana Shake?

Shake is ground weed, and it's the leftovers from the buds that are trimmed off during the harvesting process. It comes from the small, hard to market buds.

Shake is a granular mixture of small buds, sugar leaves, kief and small bits of stems, and it is usually cheaper than other forms of cannabis.

Typically, shake doesn't have as much THC as  larger, dense nugs, but it still has enough to get you high. Some people might not like shake because of its strong earthy taste, but others enjoy it because it delivers a more mellow high than smoking whole buds.

Shake can be bought in bulk for a cheaper price per gram, making it a good option for budget-minded smokers.

One thing is for sure, shake is a great option for making edibles, especially if you have some on hand and don’t want to smoke it. Just simmer it down into a butter, put it in your recipe, and voila!

There are a few reasons why people might choose to buy shake over whole buds. For one, it's usually cheaper because it is the leftovers from the good stuff.

But, if you buy shake from a good brand, the quality sometimes comes out fluffy and fresh and just as smelly as the regular nugs.

Either way, if you end up with some shake that you don’t think will be tasty to smoke, there are still some great uses. 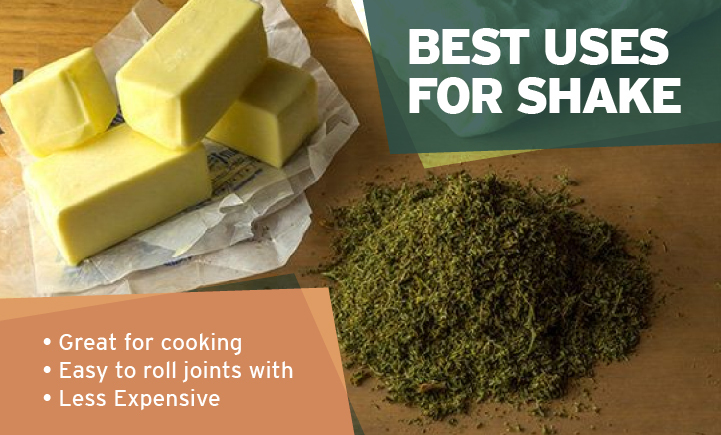 Shake is a great option for people on a budget, or who are just starting out with cannabis. It's also good if you're not sure what kind of high you want- shake can provide a range of effects depending on how it's consumed.

You can also use shake to make hash oil for dabbing or vaping. You'll need an extractor like the Magical Butter Machine or Rosin Tech Pro Kit. All you have to do is heat the shake up until it's melted, then press it through the filter to get your oil. You won't get high quality rosin from shake, but it is technically possible to create rosin this way.

If you're looking to save money and still get a good high from edibles or from a cheap joint, shake might be your best option.

Shake weed is a term used to describe the leftover bits and pieces of cannabis flower after it has been broken up by hand.

Shake is cost-efficient. Shake provides more for less money than whole nugs because it’s already broken down into smaller pieces of weed that are easier to smoke, roll or vaporize.

The name came about as users would shake their bags containing nugs to remove all the smaller particles from them before they were packaged for sale.

Some people think of shake weed as being an undesirable byproduct, but this couldn't be any further from the truth. Here are some of the benefits that should not be ignored.

Shake weed can provide excellent value for your money if you are getting shake from a good brand.

When you purchase shake weed, you're getting most of the benefits of cannabis strain minus the high price tag.

It's also a great way to get introduced to new strains since you can try out many different varieties without breaking the bank. I often try pre-rolls so I can taste the flower before deciding what to splurge on for a full bag. You just might not get the full effects.

If you’re making edibles, buying shake is an inexpensive way to get a lot of THC in your butter or oil.

Plus, having marijuana shake handy is a great way to pack a bowl or roll a joint quickly. It is already ground down and ready to go.

Of course, there are some obvious drawbacks to only buying and smoking shake.

When you buy marijuana shake, you're not getting the whole plant. This means that you're missing out on terpenes and other cannabinoids that contribute to the overall effect of the cannabis strain.

Shake is often dry and because of the terpenes losing their freshness, the bud also loses its flavor and smell.

Another con of buying shake weed instead of whole cannabis flowers is that there are some stems within the mix which can make it burn poorly. However, if you're using a vaporizer, this isn't as much of an issue.

Is Shake Weed a Good Bang for Your Buck?

The reason that some people look down upon shake weed is because it's not as easy to sell or market. It can also have lower levels of THC and other cannabinoids. But, for the budget-minded smoker, shake weed is a dream come true.

Like anything in life, there are pros and cons to buying shake weed. For one, it's not as potent or rich in cannabinoids. Since shake weed is a little bit older and more dried out than whole buds, the THC content isn't going to be nearly what you get with fresh flower.

In the end, whether or not shake weed is a good bang for your buck depends on what you're looking for in cannabis and your budget.

The answer to this question really depends on what you're looking for when it comes to cannabis.

Shake Marijuana Rolled Up and Concluded

This material can be used to make other products like edibles or concentrates, but most of the time it's sold as "shake" because it doesn't have many uses besides smoking, vaping or making edibles.

Shake weed is the leftover buds from when a marijuana plant has been harvested. It's usually mixed with leaves and stems that were also cut off during harvesting, but sometimes there are just buds left over.

The best way to use shake weed depends on your preferences and budget: if you want a smokeable product made out of shake rather than whole buds, then go ahead and buy it. Lots of people that make edibles at home actually prefer to use shake or trim.

If you want to make concentrates, using shake isn't cost-effective

The pros of buying shake weed are that it can be a good value for your money compared to other products, and you don't need a lot of equipment to smoke or vape it.

The cons are that shake is drier and not as fresh. You won’t be getting the full amount of terpenes that you would be getting from fresh nugs of that same strain.

If you're looking for a good way to save money on weed, give shake a try. You can find shake or trim at many dispensaries, and it's a great option for people who want to get high without spending a lot of money.

It might not be as good for smoking or vaping, but it's perfect for edibles and extracts. Give it a try and let us know what you think.