Alright, not every little corner of cannabis-legal Las Vegas was the best ever, as evidenced by this Bakked CO2 Distillate I picked up at one of the two medical dispensaries selling recreational marijuana that disappointed your Gentleman, The Grove. At first, I was excited to have a budtender assigned to me to help navigate their store and menu, but when I discovered that he was just reading items off a chart he'd been given, and that I couldn't actually SEE any concentrate before purchasing, I just went with a name brand I'd heard of and hoped for the best. I got meh. See, I told you! There's gonna be more meh reviews! Ahhh...it's been a helluva week here at GTHQ but at least I'm not Jeff Sessions! Ha! That dude is Gone like some stupid movie about some crazy Southern lady who can't decide who she wants to bang after the Civil War or whatever, I can't watch that shit, it's like eight and a half hours. Look, though, I gotta explain what's going on for the drooling morons in the back that don't understand why we're super-focused on Russia and not all the other terrible shit Ryan & McConnell are up to, like arranging the quarterly Congressional Murder-Orgy Ball with the money they'll steal from your healthcare. THIS IS JUST REPUBLICANS BEING REPUBLICANS AND IT'S NOT ILLEGAL TO PASS LAWS THAT COMPLETELY FUCK THIS COUNTRY. Its why they shouldn't be in power but, hey, I'm not against granting them a minority voice which will come from their lone representative in my government, who will be required to make their arguments for why The Man (me) should keep his damn hands offa everythin 'cept poor people, dark people, and women people via CCTV from a half-rusted shark tank off the Florida coast. I'm a reasonable guy. But if- IF! Trump and any of his associates are proved to be a nasty band of traitorous fucking hobgoblins, shoot, even if they get caught in a big enough lie, you can stop the entire villainous train. And if it can go further than that, destroy Trump's brand and businesses, then maybe the next loudmouth asshole Richie Rich/Alex P. Keaton/Slimer hybrid will think twice before running for public office and decide maybe he'll just stick to running things behind the scenes with his Skull & Bones Ivy League Illuminati cult of Freemasons as has been acceptable for millennia. Ok, time to get Bakked. I picked up both the Pure and Terpene Rich versions of their Co2-extracted distillate out in Vegas. The packaging, I have to say, is gorgeous. I was very psyched to break open these boxes and get at their sweet, sweet goo! The containers within, I also have to say, were a trainwreck. BOTH of my super-expensive Bakked distillates came in jars that were disturbed during transit, leading to half of each lost to the lid, the threads of the jar, etc. Could have happened pre-dispensary, coulda happened after I left the store. This means either the budtender needs to stop and check that all my distillate is in the jar before I leave the shop AND that the package should include a warning not to tip it AND the budtender should tell you the same damn thing OR you could just package them in a syringe for the money Bakked is charging, come the fuck on.

The plan was to compare and contrast the two Bakked Distillates, but they're actually super similar to each other, which makes me a very sad panda considering the Terpene Rich costs $12 more ($60 for 1 g vs $72 for 1g). I don't taste much more flavor from the Terpene Rich Mr. Nice than I do from the Pure Strawberry Chem, and what I taste is a smidge of Lemon Pledge. And I don't feel significantly more medicated from the Pure, though both do their jobs pretty damn well. The Mr. Nice was indeed very nice, a very smooth indica that allowed my anxious mind to let go of its many troubles and slip into a relaxed state perfect for a binge-watching session. Unfortunately, I chose the Rams season of All or Nothing and fell asleep to the soothing sounds of a futile Jeff Fisher. [caption id="attachment_2323" align="aligncenter" width="720"] 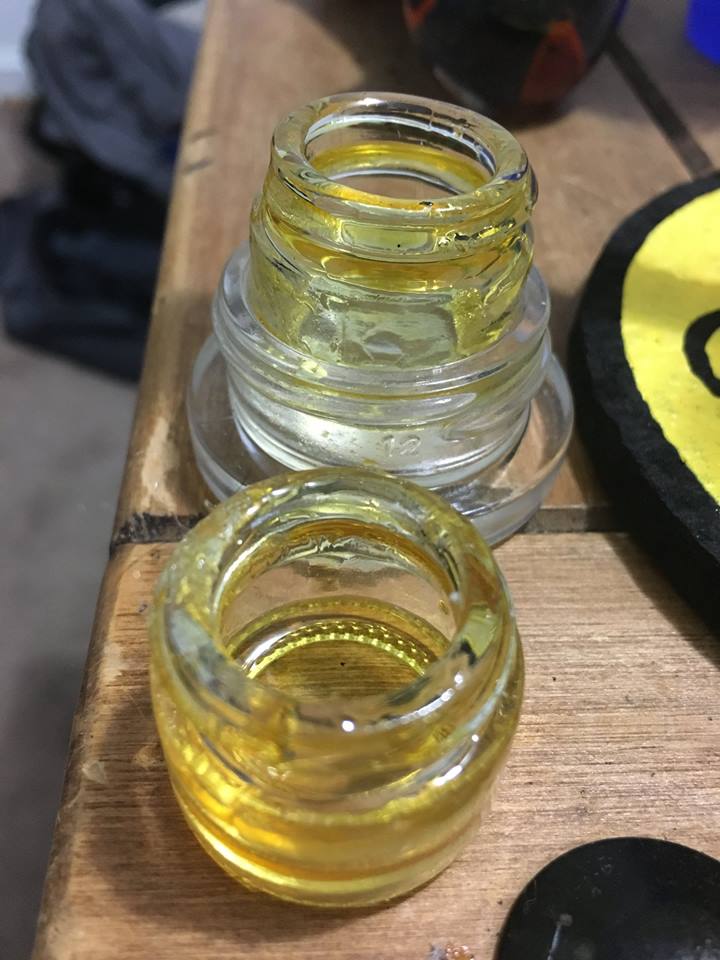 You can see I've tried to create a solution to capture the concentrate from the cap and threads here. No, it didn't really work.[/caption] I was really excited for the Strawberry Chem, as I love the flavor of good Strawberry Cough but require medical effects more in line with Chemdawg's delightful diesel. This strain splits the middle between the light airiness of the heavily sativa-leaning Strawberry and that solid, invigorating Chem. You feel awake and alert but not quite amped up. I feel more inclined towards a nice jaunt through the Butterfree Preserve than saddling up on a dirt bike to go X-Gaming or whatever you young go-hards do these days. It's not that Bakked is bad medicine. It's that, for the price, I could get flavorful, ACTUAL Terpene-Rich shatter or live resin or live honeycomb with real flavor, and more of it. Much more, considering the packaging problems stole about half my meds from each jar. And what the hell is up with The Grove expecting me to buy weed off a list? This ain't Leafly, homes, you gotta show me the trees!