If you’ve ever browsed weed strains online or at your favorite dispensary and wondered where they come up with strains like Meat Breath, Lilac Diesel and Animal Mints, you may have wondered where some of these wild names come from. To understand, it’s important to know how cannabis breeding works, including the devising or choosing of names for things, or nomenclature, for cultivars.

We live in a world where almost all retail cannabis is hybridized, so most enthusiasts will probably never experience a true landrace strain (more on this in our article What Are Landrace Strains?), but there are thousands of hybridized cannabis expressions for consumers to explore. So let’s dive into the world of cannabis breeding! 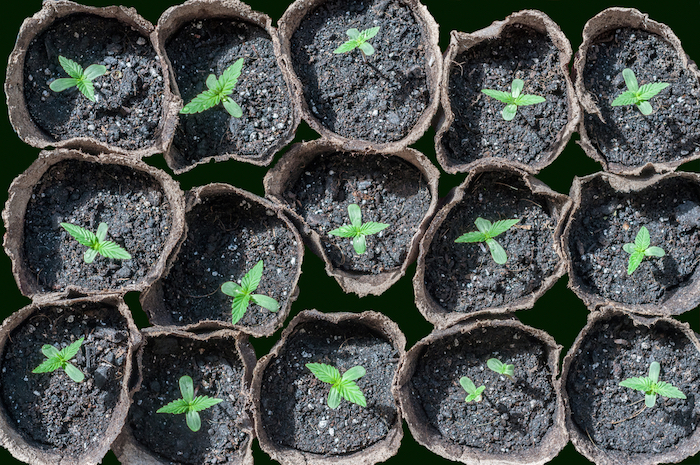 A first generation, or F1 cannabis plant is bred by pollinating a female cannabis plant of one variety with pollen from a male cannabis plant of another. In most gardens, cultivators sex their plants by looking for pollen sacs on the males, and cull the male plants early to avoid accidental pollination. When breeding cannabis, male plants are sequestered from the rest of the garden until the pollen is ready to be collected. It can either be collected in a jar and dropped onto the female plant, or by shaking the male plant so the pollen naturally flies out of its sacs.

Pollinating female plants between the third and fourth week of flowering leads flowers to develop seeds. These seeds can then be planted, and the resulting plants are the first generation of offspring from the parent strains, a.k.a. F1. Typically cultivators will grow out clones of the F1 line three times before that expression of the strain is considered prime. Future runs of clones from this line are still considered to be F1 generation.

What's Up with Numbering Strains?

A phenotype, or pheno, refers to the expression of a plant's genetic blueprint. When a female cannabis plant produces seeds, each seed is a phenotype that expresses a unique set of traits from each of its parents. Breeders conduct “pheno hunts” when breeding a new first generation, or F1, looking for desirable new expressions of traits inherited from the parents. The amount of seeds necessary for a pheno hunt depends on genetic variation between different plants of the same cross. Typically, it takes roughly 100 seeds to adequately hunt a desired F1 expression from two F1 parents and produce a unique cultivar that is retail-ready. Homegrowers can work under space constraints, but it’s recommended to germinate at least one pack of seeds (this applies to running more stable genetics too) for the hunt, and to pop as many packs as it takes until a “keeper” pheno is cultivated. Pheno hunts take a minimum of three grow cycles, but some especially committed breeders have been hunting their strains for years or even decades.

One great example of a pheno hunt is Wizard Trees and Deep East Oakland’s collaboration on Rainbow Sherbert. They selected phenos #3, #11, #16, #18, #40 and #54 from their original pheno hunt, and then created a second generation, or F2, using the #16 phenotype. From that F2 generation, the chosen #21 pheno became Zoap.

This all gets even more complicated when strains are grown by different breeders for different projects. For example, the #11 phenotype of Kush Mints usually refers to Seed Junky’s breeder cut, but The TenCo uses variously numbered phenotypes of Kush Mints for Blue Zushi, Yellow Zushi and Wazabi. The breeder and number of a strain can be important to know the big picture of your cannabis plant’s genetics, but you can pretty much disregard the number if you only have one option.

An F2 cannabis strain is the second generation of a cultivar, bred from two F1 expressions of a strain. Here we need to define the term heterozygous, which means having inherited different forms of a particular gene from each parent. (Homozygous means the plant inherits identical forms of a gene from each parent.) F2 heterozygous cannabis plants from the same line have the potential to exhibit a wide range of desirable recessive traits that were not visible in the F1 generation.

Cannabis breeders evaluate the structure, yield and hardiness of a plant, and look for similarities to identify which plants are most suitable for breeding together. Strains that are proliferated by breeders and cultivators are considered desirable due to many factors including harvest yield, resin development, ability to yield hash, flavor, effect, scent, structural integrity, hardiness, appearance and vegetation time.

The F2 generation introduces more complexities that are labeled as different kinds of crosses. Generally, the F2 label for cannabis breeding is reserved for the plants bred from two F1s considered to be genetically similar.

An in-cross (IX) is a cross of two F1 phenotypes that didn’t differ enough from its parents to be considered F2. In simpler terms, if you popped 20 seeds of the same and got three distinct expressions (let’s call them #3, #5 and #11 based on the pot numbers) an F2 cross would be crossing two #3 samples together while an IX would be a cross between #5 and #11. An in-cross can also refer to crossing two F1s from the same lineage, but not from the same pheno hunt, that have similar expressions.

An out-cross (OX) is akin to an in-cross, but with dissimilarities present in the F1 varieties crossed. OX parents are typically from the same genetic lineage and is a way to add more potentially desirable traits to the genetic pool that are not already present in any of the F1s. A back-cross (BX) is when an F1 plant is crossed with a parent, or P1, to hunt for desired traits presented in both the parent and the F1 plant. These types of crosses are commonly done to get a male keeper with similar expressions as a clone-only female cultivar.

Back-crosses can happen between a P1 of any generation and a descendent of a later generation. Back-crossing is crucial for preserving traits in genetic pools. The higher the number of a BX is, the further back the crossing of its lineage goes.

In plant nomenclature, an S1 is any plant that has “selfed,” or self-pollinated. Female cannabis plants can develop pollen sacs towards the end of the flowering period due to stress. As a last-ditch self-preservation effort, cannabis plants can self pollinate, resulting in feminized seeds. This can result in offspring that is genotypically similar to its parent. S1 generation plants can also be backcrossed to the parent (P1) to make an S2. An S1 can also backcrossed with earlier genetic expressions of the plant to make an S3 and beyond.

It’s a common misconception that S1 seeds and “bag seed” are the same thing. While it is possible for a mature seed you find in your nug to result from feminized self-pollination, it’s also possible that the seed is a result of accidental pollination by two parents. It’s not really possible to discern the difference, unless you cultivated the original parent yourself. 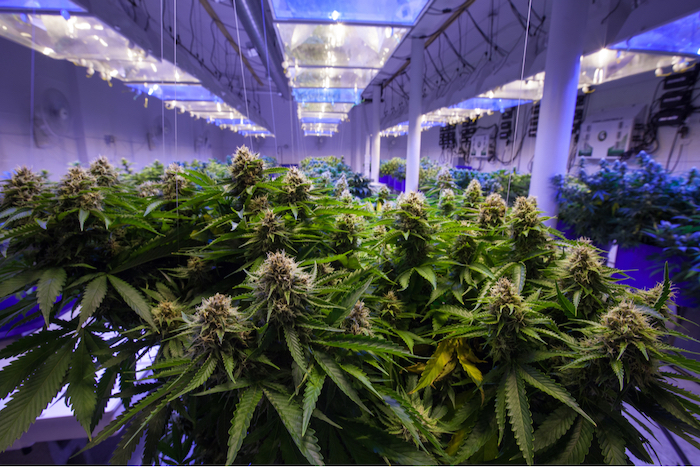 Cannabis breeders will keep breeding plants back and forth with parents and offspring to cultivate desired expressions. A third generation or F3 plant is typically a cross of two F2 expressions, resulting in a heterozygous (remember, this means two different expressions) version of the offspring. The variance of an F3 will depend on how different the F2 parent expressions are.

An F4 continues this trend by crossing two F3 offspring. By the time breeders are working with F4 offspring, they have more or less locked down the desired traits exhibited in the F1 and F2 generations so that most of the plants have the same desired expression.

Ideally, by the fifth, or F5 generation, a cross is “stable.” This means it should produce the desired expression from previous generations of hunts, and growers can cultivate it feeling confident in the genetics of the cultivar. When a cannabis strain gets to this point of stability, it’s considered an inbred line (IBL).

How Does This All Relate To Strain Names?

Cannabis enthusiasts, connoisseurs, cultivators, and breeders have distinct respect for their forebears. This is evident in cultivators and breeders naming their plants after the varieties in the strain's lineage. Meat Breath, for example, is a cross between Mendo Breath F2 x a Cookie cross dubbed “Meatloaf.” *Deep breath* — Mendo Breath F1 is OG Kush Breath x Mendo Montage, Mendo Montage is Mento Purps x Crystal Locomotive, and Crystal Locomotive is Trainwreck x ’98 White Widow... and so it goes ad infinitum. One of the outcrosses is called Kobe Beef, and another is called Michigan Meat (Pure Michigan x Meat Breath). One of our favorite resources for understanding genetics is seedfinder.eu because of its helpful diagrams that drill down into the origins of strains.

The Takeaway on Cannabis Breeding

Understanding where strains come from, why their desired expressions were chosen, and how those traits are expressed can help us all determine whether the bud we’re smoking is what we’re told, or just some huff. Cannabis cultivators go through years of selective breeding in order to achieve desired flavors and effects, partially to differentiate themselves in an increasingly competitive marketplace of genetics. While some popular strains are F1 cultivars, these F1 releases have a ripple effect from the bagseeds and test cuts that get grown out and then claimed to be the distinct popular varieties they came from. Not all cultivators are working towards stable genetics that result in a low genetic variance, and this results in a lot of consumers getting sub-prime expressions. Ideally, this article can help consumers understand what to look for from a prime expression and also help fledgling breeders understand how to hunt for desired traits in their favorite strains. That way, we'll have a whole new generation of cannabis cultivars with unique, delicious expressions of flavors and effects. Breed on, friends!