I reached out to Slab Life icon and DC-based world-traveling cannabis advocate Phone Homie for a sample of his Triple XXX flower and he told me that he and his crew smoked it all, of course. How else would you celebrate winning 1st Place Indica division at the 2016 DC Grower's Cup? He graciously invited me out to the Slab Hour anyway and told me he'd get me something else to review.  Luck was on the Gentleman's side, though, as it turned out that a bit of the flower had been spared from the festivities.  I was handed an envelope crafted from the show's set list. 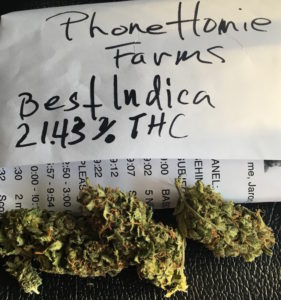 The contents did not disappoint. This strain (you say it "triple-cross") combines the heavyweight resin-producer Afgooey with classic genetic staple Skunk and perennial crowd favorite Sour Diesel.  Phone Homie Farms' organic, soil-grown process produced large, tightly-packed dark green buds with a light dusting of trichomes and shocks of red hairs throughout.  It boasts a bold, rich aroma of earth, clay, and tobacco but the smoke is surprisingly smooth. Indicas don't always knock me out.  Some I find positively invigorating, like Holistic Remedies' Master Kush.  There's some research that has suggested the couch-lock effect is caused by the presence of high levels of the terpene known as Myrcene.  Taking this into account, I decided to gamble on trying this strain out first thing on a weekend morning, knowing I could go back to sleep if I got the brain-fuzzies. Triple XXX came on like a gentle ocean wave, drifting lazily over the shore of my mind,  lifting the tiny grains of misfiring neurons and effortlessly dropping them back into their proper alignment. Psychically refreshed, I found myself in tune with this material shell. Blood and oxygen crackling along sinew and muscle, the tension and precision available in my fingertips, my body electric.  I felt it working its way to the back of my head, activating primitive, long-dormant regions of the spinal-brain. The stimulation allowed unfettered access to the true Home of Poets, the collective unconscious, the records of the Akashi.  I mostly stumble along my path in life, so I mind my steps one at a time, searching for signs and portents to guide me to the next. Let's fast-forward to last night.  I'd been writing this thing for four mostly unproductive hours when I finally gave up and decided at 1:30 am to go looking for a particular rare Pokemon that I'd heard regularly appeared at the National Cathedral. Yes, I know exactly how that sounds. The grounds of the Cathedral are large and sprawling, full of nooks and abbeys like you'd imagine an old European church would be like, but everything's a bit too squeaky clean, new, well-maintained. It's like the Happy Meal version of a real place that exists somewhere else. It's quite impressive, all the same, and if it was not precisely inviting at this time of night, it wasn't foreboding, either.  I ventured inward, assuring myself that even a wretch like me was safe in the Lord's house. Since my target hadn't appeared on-screen yet, I travelled away from the road proper towards a Stop I figured must be in one of the many gardens. Getting there required going down many sets of twisting steps, past the well-lit brick and mortar, into darkness. Paying  little attention to how close I had come to a small wooded area, my entire focus on the artificial creature that tracking said was right underfoot, I had blindly wandered into the hunting grounds of an actual beast.  The heavy snap of a twig caught my attention and expecting to see one of the deer common in this area of the city, I saw nothing. Nothing growled at me. It was low and quiet, but its message urgent and insistent.  I was not its usual prey but I had wandered into its territory.  This left us with only a couple of options.  Of course, this is all hindsight. Thanks to the Triple XXX I'd smoked before heading out, primal instinct met my wits at the door and I took a good, fast look at my surroundings. The current environment favored the Beast. Steps just in front of me, leading up to more light, more stone- the weapons of ancient man that, while they will never totally conquer the biding darkness, have allowed us to hold it at bay. I took the narrow steps awkwardly but with true haste, bounding up two or three at a time.  Then another set, which led me to a small study area of metal chairs and tables.  Another set of stairs led down, but I stopped when I realized that here, the advantage had turned. I lifted a chair and caught my breath in gulps. I had gained much vertical distance.  Better now to steady my strength than to exhaust myself in further flight.  When I was ready, I went to check on my pursuit.  There was none. I didn't know the way out and was too deep into the complex to see past all the buildings to the safety of the road.  I kept to the light as best I could, to the structures and away from trees. It took longer, much longer, than I'd have liked, but soon Massachusetts Avenue spread out before me, the roar of the steel tigers racing across her surface filling me with joyous relief as I bounded out. Not before I got my Onix, though.  If you're dumb and desperate enough to stick your hand in the hive, make sure you get the honey, honey. If you can't tell, I'm a big fan of this Triple XXX.  It definitely has a place in my medicine cabinet. If you can't find any coyotes to fuck with, I think you'll also find it very useful for working out or exploring the more subtle mind/body connections with yoga or meditation. Or explore those connections with a partner.  This is some great sex weed, since it's such a clear-headed body high.  I think you can see the true essence of a particular cannabis flower when expressed into oil, so I would be very excited to try this in its concentrated form. Congrats on your win, Phone Homie Farms!  It was well-deserved.