Psst. Part 1 of i502 Drew's Spokane Top Shelf Showdown featuring the ooh-la-la cultivars he obtained at Satori North is right here. FYI, most of these products you can find around Seattle, as well. Ok, ok, I'll let you get to it, I know you're busy these days but, really, how hard is it to pick up the phone and give your old GT a call? He worries so, you know. Golden Gage by Sonic Green Best part about a high-end gram bag? A top-shelf product is completely dry but with all the flavor locked in- fully cured. The nug feels light and airy, but some of what's missing is excess water. Stellar smell reminds that reminds me of C99 which makes me wonder how well I could identify the OG Kush family by scent alone.   Rapid onset of effects; focused energy and high mental clarity. It starts with that distinct feeling originating at the base of the skull, but don’t be fooled: Golden Gage is no indica. It offers little in the way of relaxation to counteract its potent stimulation of the mind and body. 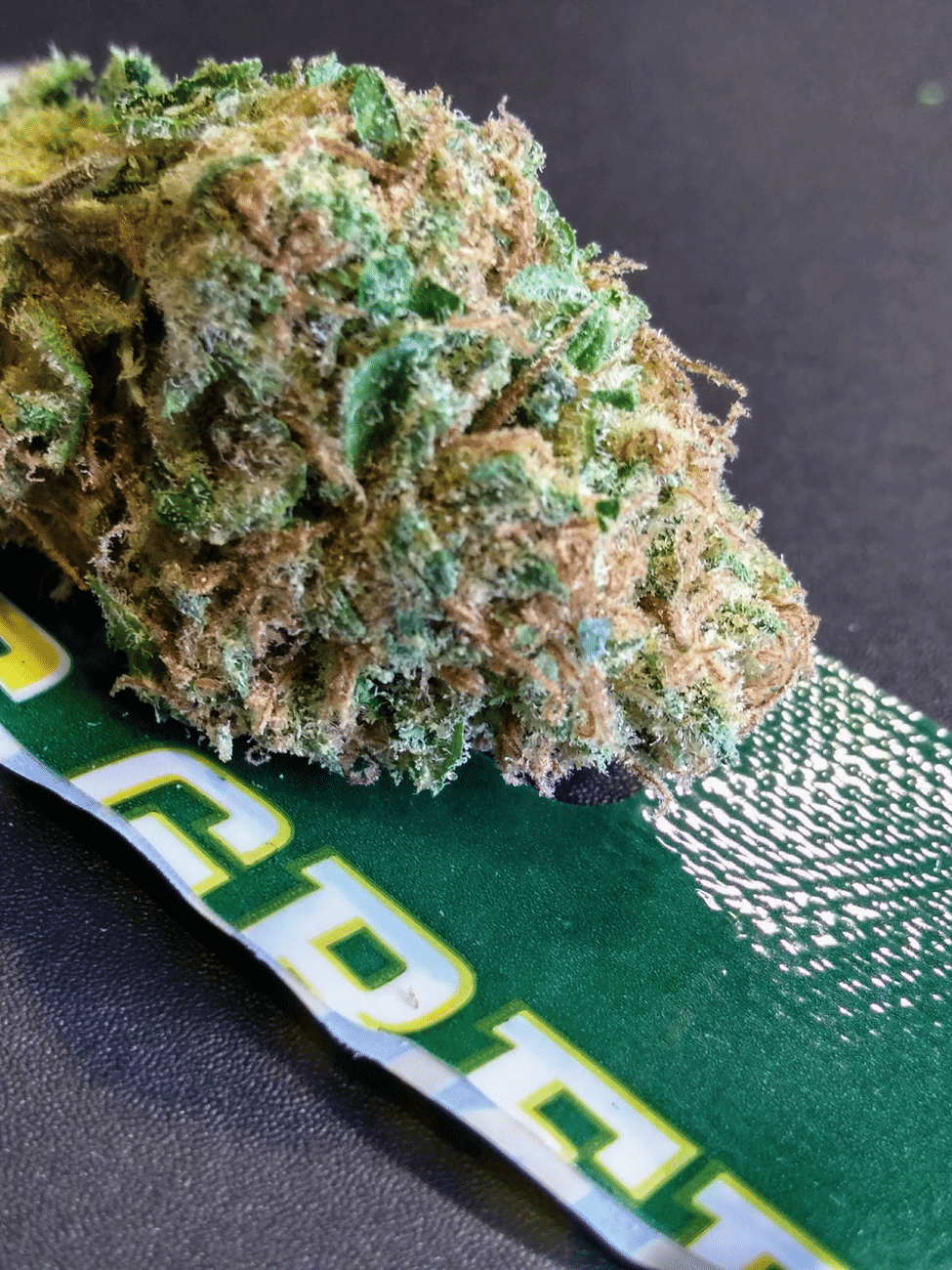 To create this variety, the Colorado clone-only ‘Golden Goat’ took a load of pollen from Joseph. The resulting Golden Gage is an energetic blend of its Hawaiian sativa lineage (Sweet Island Skunk > Golden Goat) and a lemon-favoring mix of Sour Diesel and OG (Joseph OG). A single gram is pricey, costing 20% more than the Blue Bird and Goji OG. But don’t expect to see this rare breed on the shelves of many retailers in Washington state, let alone Wisconsin or Georgia. Blue Bird by North Coast Growers As soon as the seal is broken, I feel like I understand what Blue Bird is all about. Blueberry and Kush. Sweet, gassy, DJ Short Blueberry- but more like Purpleberry, no- Purple Kushberry. I mean, seriously, this stuff is pungent. A sweet and dense aroma permeates not just my nostrils, but the whole room. I typically don’t like high-power indicas but I’m gonna smoke the shit outta this right now. The color has a base of deep purple with thick bushes of bright orange hair and a smattering of vibrant greens. 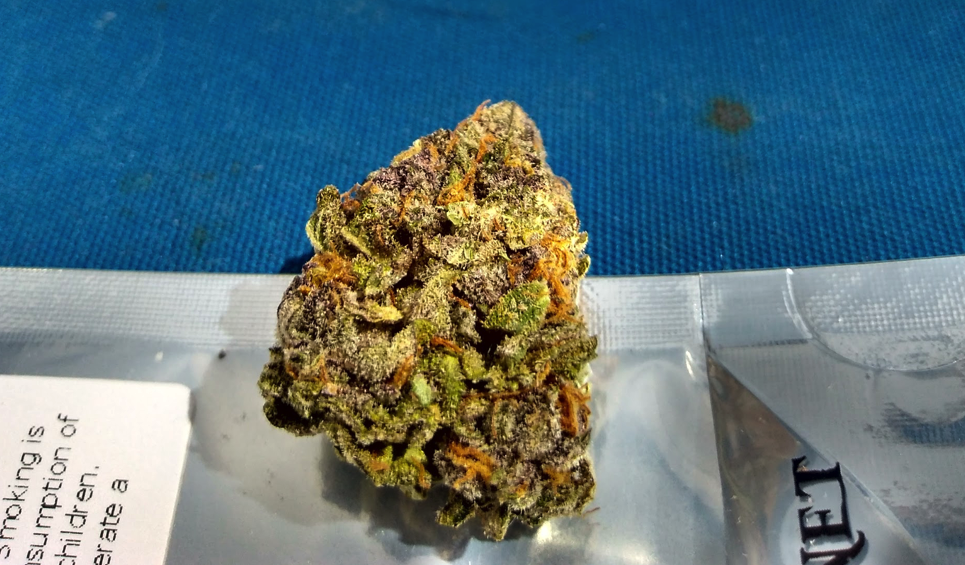 The feel is sticky and dense and makes for a nice, slow burn. It’s surprisingly easy to break down (even with one hand, for an in-the-whip or on-the-go roll up) and the flavor is sweet AND tangy, almost as if there’s a purple variety hiding behind the classic blueberry. It’s a top-notch saliva-inducing experien- HEY watch it! You’re drooling in the bong, dude! I’d load up another bowl but I've learned to respect the truly head-spinning potency of DJ Short’s legendary cultivar. A few deep tokes and something tells me, “It’s time to take a seat.” Any more and there's a chance I'll begin floating just enough to realize I'm feeling dizzy. Goji OG by House of Cultivar Remember when a wild Afgooey appeared that seemed to be a Maui Haze dominant pheno of the heavy hitting Afgoo? Ya know, resinous and frosted, light green, foxtailing buds that were truly uplifting but still satisfied the indica-lover's palate? Well that's like so 2012, man! It’s 2017 and something has got to set the bar higher. Meet Goji OG by House of Cultivar. Yet another creation from the breeders at Bodhi Seeds, Goji OG is a hybrid of Nepali OG and Snow Lotus. Like the Golden Gage, it's described as an 80/20 sativa dominant hybrid. It's not all that similar, though. It's still uplifting, centering, and gives me adequate focus, but there IS an element of relaxation to Goji OG. In small doses, that serves to mitigate feelings of anxiety and restlessness that many users experience with sativa strains. In larger doses, the results differ between individuals. 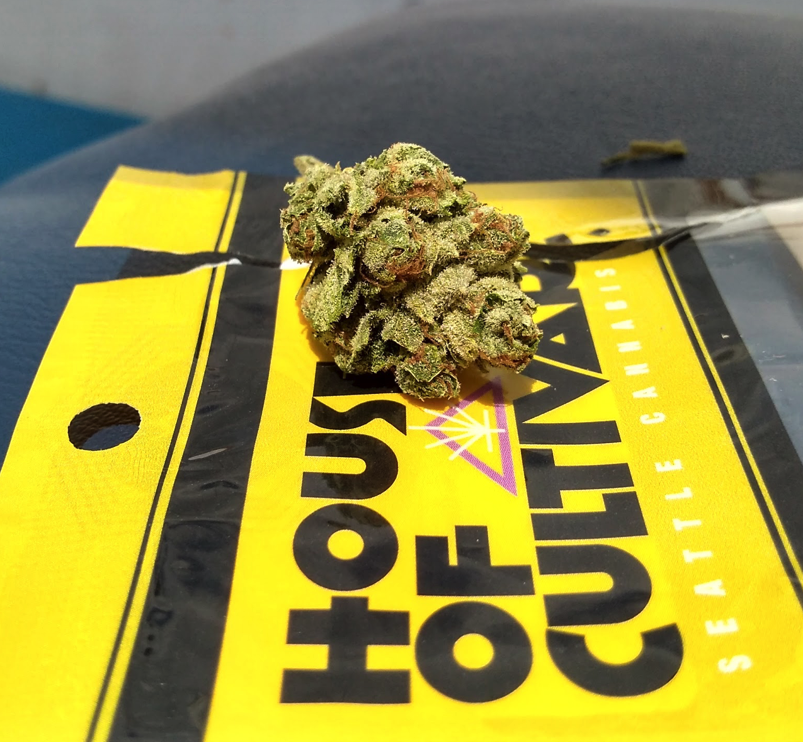 For me, without a good 3-4 hours between tokes, the sedative qualities start to add up faster than the uplifting ones. Not that it has a punch like Blue Bird, but I still tend to forget why I walked into a room more frequently as I gradually become stoned. For others, that's just the right way for them to get things done. The Winner? Me, duh. I found three awesome strains at Satori North to smoke. Which Flower Won, Smartass? Hey, chill with the aggro, bold type! Each of the three picks has its own audience in mind, and each of them delivers. The Goji OG did have some small sacs- a sign that the plant had hermied and started producing seeds- but most folks wouldn’t notice, so I won’t hold that against House of Cultivar just yet. The Golden Gage from Sonic Green WAS worth the extra money from the get-go since it was fully dried (still terpy) and there’s no denying this strain is the connoisseur’s choice. If there’s a best value of the bunch, it’s definitely the North Coast Grower’s Blue Bird.