Phone Homie, host of The Slab Hour on ListenVision.com and an original, driving force in the District's cannabis event scene, is as renown for his dashing haberdashery as his personal brand of concentrates. His thread designs strike a balance between heady and stealth, while the DabberHashery strikes Super Gold in their latest shatter extraction. Win/win, baby! Homie was one of the first folks kind enough to donate some flowers for review- his XXX that had just won 1st Place Indica in the 2016 DC Grower's Cup- and I'm psyched to check out his oil as I had opined what seems like a lifetime ago. In the previous review, I found myself hounded by man and beast as I set upon this strange path of the Gentleman. No such drama today, mes amis. I spoke of omens in my last tale that have returned. I spoke of a vision, a League, that is clearer than ever before. My life here is winding down; the ties that once bound have strung themselves into a neat, little bow and I am very nearly free. As I ran around the city looking for the best weed to tell y'all about, I saw Phone Homie everywhere. Terpin' it up at The Slab Hour. Hosting the Cloudy Parties. Emceeing the Edibles Festival. Hip stoners are rockin' his Slab Life and Across the Moon E.T. homage tees whenever I hit the scene. The unmistakable Stoned Immaculate exhaling lips stickers, reminiscent of the Rolling Stones iconic logo, can be found in Takoma, Adams Morgan...dude, I found one when I stepped into the Tetra Hydro Club in Rhode Island! You gotta respect that grind. And between his various pursuits, somehow Phone Homie still finds time to make some kickass medicine for the community. 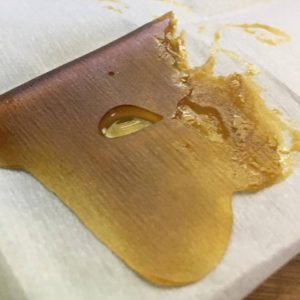 The Super Gold shatter from DabberHashery I sampled was an amber delight, perfect in its consistency and super easy to work with, which was good because I found myself reaching for it often. The rich flavor of warm spice yielded a tremendous euphoria to lift depression and a powerful focus that leaves no room for anxiety. When Super Gold is converted to brain fuel, I have plenty of energy to set about work or my feet to old, familiar pavements, absorbing their memory into my soles. Walking, I find my thoughts again drifting in creative directions, serenely contemplating life's possibilities like a monk on an ancient, snowy mountaintop as dull grey trucks belch their sulfurous loads and cyclists swerve 'round me, swearing. Everything zen, baby!