Hot damn!  My head is positively spinning at all the recent developments in the DC marijuana scene.  Let's start with free seeds!  DC Seed Exchange, started by an admitted bean-hoarder, is currently giving away packs of Jack Herer from Green House Seed Co and CBD Sweet & Sour from CBD Crew.  Follow them on Instagram @dcseedexchange, then repost their photos and use the #dcseedexchange hashtag when you explain why you should be one of the lucky winners. Moving on to new medical products!  In the past week, we've got a new strain from Holistic Remedies- Maui Crush is advertised as great daytime medicine for pain and depression, so you can be sure I'm going to check this new medicine from one of my favorite flower cultivators soon. [caption id="" align="aligncenter" width="200"]

Maui Crush[/caption] Apelles has expanded their line of concentrates as I expected- I found Apelles 818 Headband Kief on Takoma's menu as well as Girl Scout Cookies Bubble Hash at mine!  That would be more exciting if I liked that strain, but GSC is still a very popular flower here on the East Coat (it's safe to say the West has moved on to the famed Forum Cut pheno).  On their homefront, Capital City Care has got into the Rosin game with their Silver Kush strain.  Looks too dark to me from the picture, but it's difficult to say for sure, as the concentrate pictures on StickyGuide often vary from the actual product.  I can tell you for certain that none of the Alternative Solutions Rosin I've had looks this good, and I'm always sure to ask my dispensary if it's closer to gold yet.  It looks like new strains from District Growers, too- Sting Like a Bee, in a nod to Muhammad Ali, and It Was All a Dream.  Damn your hipster naming team, DG, I feel I've grown a tiny mustache on my finger just writing that. We've had two new Abatin flowers dropped on us- Sweet Cream and New Dream, both sporting an improved THC content from previous offerings.  The New Dream sold out at all the dispensaries so fast I can't even tell you for sure what the THC was (around 25%, I think), but I managed to snag some of the Sweet Cream (23%) and it is definitely up to the best District medical marijuana cultivator's high standard.  Speaking of! Kashmir is an entirely new line of flowers available in eighths only (3.7g, actually) at $75 a pop.  To hear Abatin tell it, they've kicked everything else off the top shelf, propped their feet up, and settled Kashmir's Gold, Red, and Black No3 as the new kings of medical marijuana in the District of Columbia:

When the best becomes the beginning... The Kashmir line of luxury medical cannabis products represents the current state-of-the-art in cannabis breeding, cultivation, processing, and packaging. Kashmir starts with genetics bred from the oiliest and healthiest cannabis lines. Only a single plant among five thousand candidates will rise to the Kashmir standard for cannabinoid and terpene production, vigor, flower set, aroma and flavor. These rare Kashmir selections are pampered, cultivated in the finest soil, under full sun within the only greenhouse cultivation facility in the District. All environmental inputs in the green-house are computer-controlled, enabling each small Kashmir crop to be tended by hand by professional plant scientists. As the Kashmir selections flower and ripen, an onsite fully-equipped analytical chemistry laboratory monitors essential oil and cannabinoid production until they reach peak expression. After harvest, the Kashmir crop is carefully cured and manicured to preserve trichome integrity and maintain the optimal entourage of delicate terpenes. The finished flowers are packed in heirloom-quality deep violet glass jars from Switzerland that transmit only select frequencies of UV light to help maintain Kashmir quality. [caption id="" align="aligncenter" width="200"]

Kashmir Red, photo by Takoma Wellness[/caption] Kashmir Red is a Terpinolene-dominant ultra-high-THC selected for its massive terpene entourage that also delivers sizable amounts of ocimene, limonene and myrcene. Kashmir Red is among the oiliest cannabis ever produced with total terpenes approaching 3.5 percent by weight. Its aroma is pure citrus with hints of stone fruit and Herer phenotypes. Those terpenes are accompanied by an enormous cannabinoid entourage that tops 32 percent with THCA, CBGA and THCVA. [caption id="" align="aligncenter" width="200"]

Kashmir Black No3, thanks again Takoma Wellness![/caption] Kashmir Black #3: is a caryophyllene/limonene dominant ultra-high-THC cultivar selected for its THCA production that approaches 30 percent by weight. Black #3 was bred from OG Kush and an F1 cross of Durban Poison with a rare purple phenotype of Champagne. Black #3 expresses a very functional terpene entourage that delivers feelings of comfort calm and genuine inspiration. Its aroma is woody with a hint of citrus, while both its smoke and vapor are smooth and spicy. Because of its exceptional potency, Black #3 is quite effective in small doses. As the dose escalates, Black #3 becomes profound, as every sensory input becomes riveting. [caption id="" align="aligncenter" width="200"]

Kashmir Gold, TYTWC. All the text comes from Herbal Alternatives, so TYHA too![/caption] Kashmir Gold is a type II hybrid that produces nearly 20 percent CBDA along with a nearly 8 percent serving of THCA. Kashmir Gold produces a rich terpene entourage of myrcene, caryophyllene and limonen with an OG meets cookies flavor and aroma with notes of forest, spice and lemonade. Kashmir Gold is remarkably smooth when smoked or vaped, unique among Type II cultivars. It also delivers a refined and relaxing psychoactivity that seems to last forever. Kashmir Gold is an ideal choice for patients using medical cannabis throughout the day.

These things are selling like hot cakes, with Black already sold out everywhere and Red nearly so.  My dispensary still has some (oh, squee!) so expect this review just as soon as I can get my greedy little mitts on 'em.  I want to see if they're as good as the flowers from The Secret Cup that I had.  The Gold, as a CBD strain, is more readily available, FYI.  Now, I've gone on record as saying all the pricing needs to come down across the board before people truly consider marijuana to be medicine.  I hold to that!  So I'm not a fan of higher priced stuff coming along instead of more price dropping, but Kashmir is an open challenge to every District cultivator to raise their quality game and I expect, when I open my little black jar, to find it's a jaw-rocking uppercut to District Growers overpriced, stringy, LED-grown "top shelf."

OK, news time.  Ladies and fellow Gentleman, I am very excited about the Prohibition 420 event from Elevated Events Group.  Just look at the photo!  That's gonna be worth breakin' out the suit and monocle.  This sounds exactly like the classy kind of affair I've been waiting to get thrown out of:

October 8, 2016 Elevated Events Group will officially launch our company with a Prohibition 420 soirée in the nation's capital and you're invited! Join us for a 1920s inspired blow celebrating the end of cannabis prohibition in the District! While we still have a very long way to go, let's get lost in the roaring twenties together. The decade of dramatic social and political change. Flappers. Gangsters. Prohibition. Music. Charlie Chaplin. In true prohibition fashion, the location of this speak easy event will be revealed via email 72 hours prior to the event and ONLY to ticket holders. Our upscale venue boasts vintage décor befitting a prohibition theme. Enjoy 2 levels, 5 rooms, 3 Dj’s and a live band for the best entertainment DC offers. In support of the movement to end cannabis prohibition worldwide, we will be providing each ticketholder with a coupon for a free cannabis product from one of DC's premier local cannabis cultivators! #shatterthestigma and end the war on cannabis. Prohibition 420 supports access for all! As is the prohibition way, vintage dress is strongly encouraged. So put on your vintage glad rags and flaunt your inner Josephine Baker or Jay Gatsby, or come as a gangster or flapper. Think Harlem Nights meets The Great Gatsby! Birthday Bonus - If your birthday is October 8th drop us a message and we will add you to our birthday guest list. (proof of birthdate must be provided) Follow Elevated Events Group on Instagram @ElevatedEventsGroup and like us on Facebook to keep up with all of our Elevated Events in the DMV area. www.facebook.com/ElevatedEG TICKETS: Prohibition420.eventbrite.com 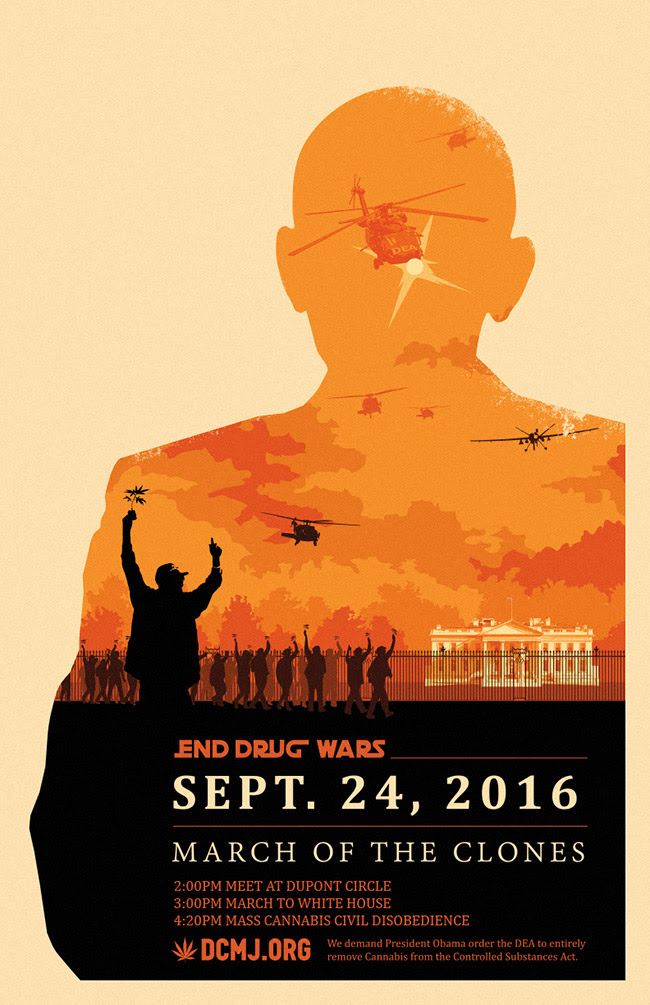 You don't want to miss the March of the Clones protest organized by DCMJ on September 24th, either.  Perhaps you've read my gonzo-journalistic report of participating in the previous Rally, hmm?  One of the best nights of my life, which is really, really sad. Rest assured, the Gentleman will return!  Here's their presser:

For far too long the power of the Dark Side (the DEA, the prison industrial complex, and ignorant members of Congress) has lead to the arrest and jailing of millions of Americans for non-violent drug offenses. As President Obama's final days at the White House wind down, he needs to be reminded that he can be a Force of Good and end the failed war on drugs NOW. On Saturday, September 24, 2016, we will gather at 2pm in Dupont Circle for a short rally, then at 3pm we will march 1mile down Connecticut Ave. to the White House, and at 4:20pm we will engage in mass civil disobedience on Pennsylvania Ave. We urge everyone to bring cannabis cuttings that weight under an two ounces to create a see of green to show President Obama that cannabis is a harmless plant not worthy of being in the Controlled Substances Act. This is an unpermitted demonstration but is a first amendment protected activity. However, possession of cannabis on federal property is still a crime which we believe must end. Possessing cannabis in Dupont Circle and Lafayette Park (both National Parks) is unlawful and is an arrestable act of civil disobedience. Those wishing to participate but who do not wish to break law can join us on DC streets (Connecticut Ave. outside of Dupont Circle and Pennsylvania Ave. by way of 17th St.) without fear of arrest. Please spread the word about the March of the Clones by inviting your friends on Facebook or tweeting about the demonstration using the hashtag #MarchOfTheClones

A pair of local cannabis enthusiasts, cousins Matt and Mark Bebawy will be opening the doors of their first brick-and-mortar location in Adams Morgan in early October.  I'm looking forward to checking out the new digs!  You can find their online headshop at FunkyPiece.com, follow Matt's grow on Instagram @funkyfarmacy, and Mark's @CatsandChronic. Finally, I wanted to share this story about Ohio State head coach Urban Meyer's battles struggles with mental health with you (thanks, Bleacher Report).  It's a moving testament.  This man has been at the pinnacle of his profession but describes how it brought him little, quickly extinguished joy.  The most interesting aspect of the article, I think, is that he describes depression and obsession not as diseases but as gifts that get out of control when we don't take care of ourselves.  That's something to consider further.  It has also forced me to confront the fact that, even if I execute my vision and the Eastern Seaboard is awash in cheap, quality cannabis medicine, on the day I overhear elderly folks arguing on a park bench whether Critical Kush or Bubba Kush is better for their arthritis, I'm stuck with me.  I'll still be the same awkward, conflicted, weird loner I've always been.  That's depressing as hell, but I'm gonna do it anyway, because I'm pissed off and bored with video games.  Global Spiritual Awakening or Bust, baby!