Today we're gonna look at two cannabis flowers grown by Maryland medical marijuana cultivator HMS Health. I stopped by their vertically-integrated dispensary, Zenity Wellness, uh, by mistake, actually. I meant to go to ZenLeaf to pick up some of that Sunrock Shatter I showed you on Tuesday, but I had 'Zenity' stuck in my head. I was surprised when the google box said I could find the dispensary I meant to visit in Gaithersburg, but new shops are popping up almost every week and many of the licenses have been gobbled up by the same companies, so I didn't even consider I had got the name wrong. This resulted in some serious confusion upon my arrival, as you may imagine, but my budtender kindly but gave me a moment to adjust to the NWO. Surely, the hand of providence hast guided me to this place! Too wise to test Fate, the Gentleman procured eighths of HMS Health Skywalker OG and Strawberry OG to review. But first, we're going to talk about something important today- THC percentage. Growing up, we heard that THC was the molecule responsible for getting you high, and so the more THC, the better, yeah? But now we know that THC alone doesn't do the job. It's an entourage effect of terpenes and cannabinoids of which THC is only one part, though it's generally the most abundant. In my opinion, so long as the THC content is, let's say kinda arbitrarily, 18% or above, it's gonna do the job. You're not gonna get, like, so much more high if you smoke 25% THC flower instead of 18%. If you need to get 'so much more high,' like your Gentleman does, you need concentrate. Even with oil, I don't purchase based on THC percentage. Admittedly, I've found some fairly low THC rosin that wasn't quite up to the job of managing my hectic headspace once or twice, but this has been rare. When I shop, I'm looking for heavy concentrations of my favorite terpenes to go along with adequate THC content, though I trust my nose a lot more than some lab results. [caption id="attachment_10536" align="aligncenter" width="4021"] 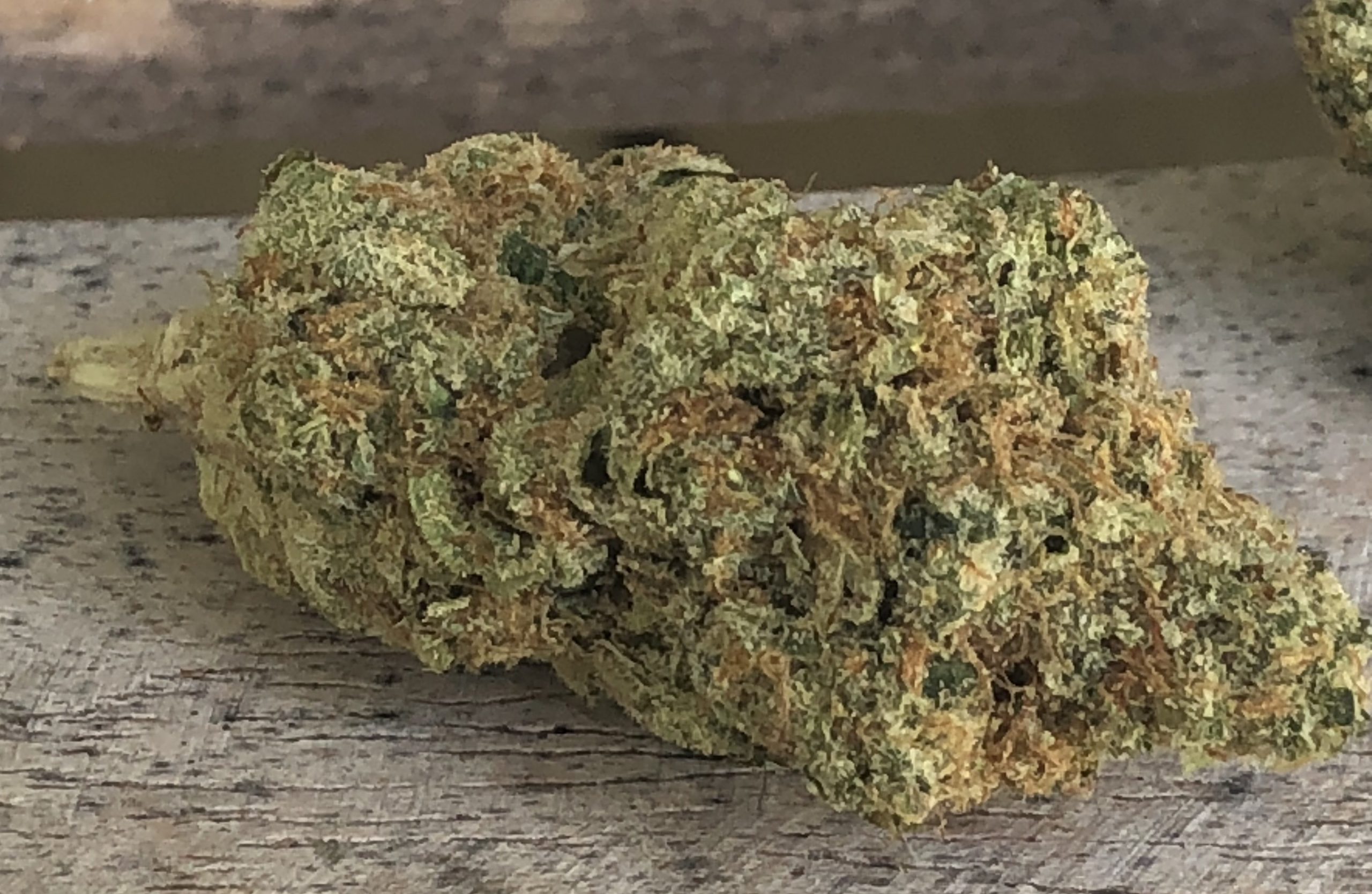 HMS Health Strawberry OG[/caption] My point is, THC percentage is a feedback loop of bullshit, can we please stop it? So long as customers keep chasing the high THC percentage, some growers will keep paying shady testing labs that accept money for rigged reports so that they can advertise their "lab-tested" high THC flowers. Case in point, HMS Health got in some hot water in social media cuz they were advertising their 37%(!) THC flowers a couple months ago. Um, as far as I'm aware, that's not a thing. 30-31%, ok, maybe. 37% is, like, Guinness Book of World Record time. It is an utter hogwash result. When rightly questioned, the social media account manager retreated into some nonsense about it being the lab-tested results, which is not a valid excuse. HMS Health shoulda known better. I talked to Steep Hill of Maryland about it, who said they didn't test it, another company did. I talked to Zenity Wellness on my visit, who said Steep Hill and other companies tested it and everyone came up with 37%. Unfortunately, I have little patience for he said-she said'ing and default assume everyone is lying or at least hiding something, so we won't get into it any further. The THC percentage is not that important, y'all. What is important is whether my flowers smell and taste good. HMS Health's Skywalker OG exhibits a wonderful, deep aroma of spices that often indicates a significant concentration of myrcene, the terpene hypothesized to be responsible for the couch-lock effect, exactly what you'd expect to find in this classic indica cultivar. Now here, check this out- the Strawberry has more visible trichomes than the Skywalker. You'd think that means it's a better product, but you'd be wrong! HMS Health's Strawberry OG reeks of ammonia, tastes even worse, and I threw it in the trash after a couple bong rips. The Gentleman has even less patience for bad weed than he said-she said. Ammonia is the smell I encounter most frequently these days, far outstripping the hay smell of a bad cure, and I run into it in dispensaries here, out West, up in Boston, in I71, every-fucking-where. Some googling has led me to believe that its unflushed fertilizer breaking down in the plant, but I'm not a grower. I just know it's Not A Good Look, Fam. [caption id="attachment_10537" align="aligncenter" width="4032"] 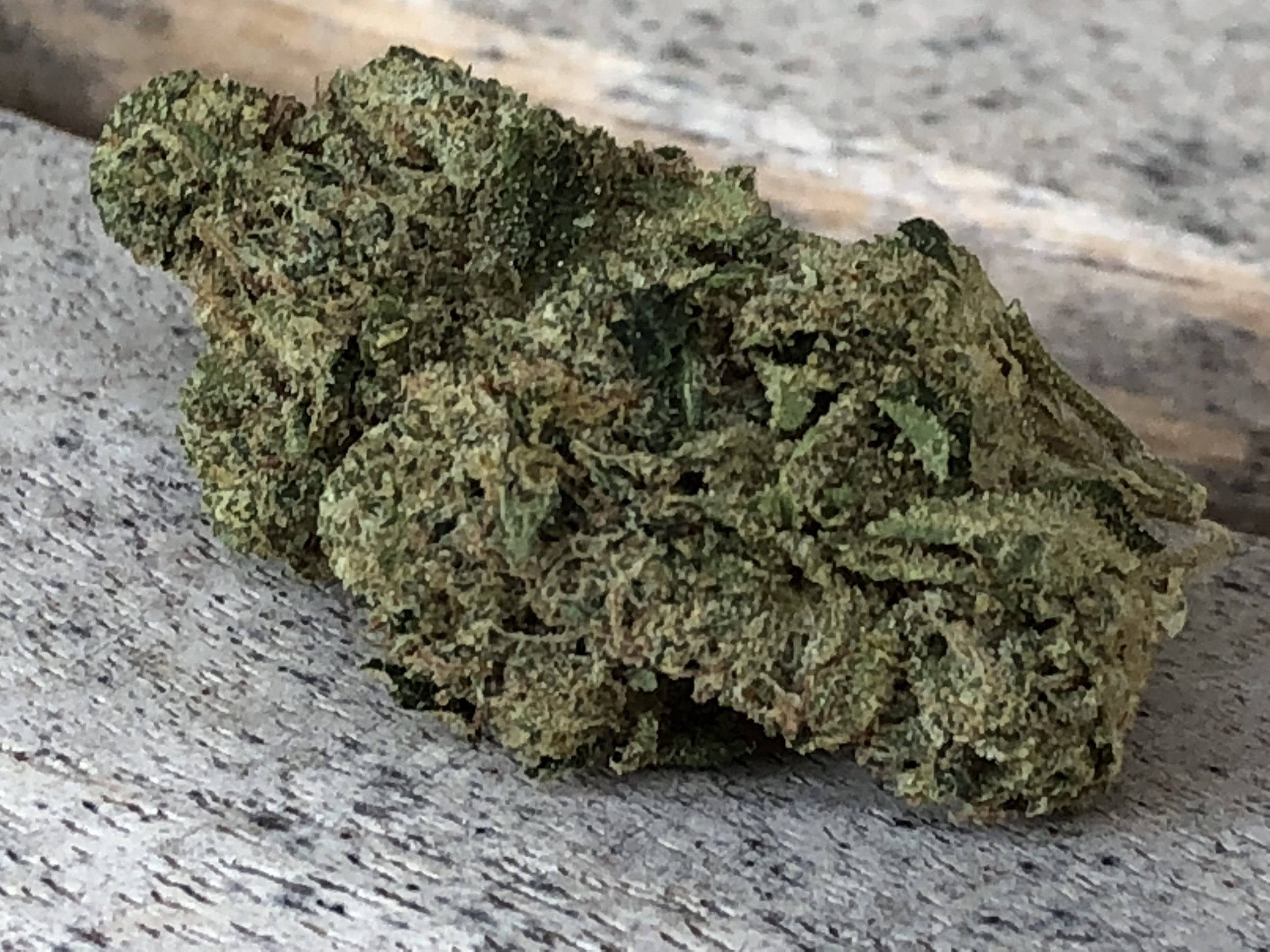 HMS Health Skywalker OG[/caption] That being said, HMS Health's Skywalker OG is very good. It glues me to the couch alright, but it doesn't make me that tired. Just dulled. I'm not going to get any work done on it unless you count leveling up in Fallout work, which I do, plus I figured out how to get my settlers to stop attacking me when I kill the Brahmin for meat to set up my Super Mutant cages. Then I zoned out watching Defenders on Netflix for a while. It's not bad! In summary, that's a yes on Zenity Wellness and a 50/50 on the first batch of HMS Health's cannabis flowers, so that's sorry, wrong show, I meant to say it's not bad and I'm inclined to give 'em another shot. If you want to get a medical marijuana card and check out all the new goodies popping up for yourself, my pals at Veriheal can set you up right proper, guv. Oh! And please sign up for my newsletter!