Native Roots Apothecary was one of the highlights of my self-guided marijuana dispensary tour of downtown Denver. Located just off the 16th Street Mall (via Champa St), the store is ideally situated for tourists. Your Gentleman was interested to see what these folks could expect when they pop in what might be their first pot shop. The ultra-hip cannabis-inspired black-and-white designs covering every inch of the interior walls make a bold impression on visitors who may have traveled here via tornado-induced concussion that they are no longer in Kansas. This is Colorado, my dear Dorothy, where they sell pot. Lots of it. And if you're 21 or older, which you damn well better be if you're reading my site or I will tell your parents on you, mister, don't test me today then you can buy some! I walked in right after a group of excited, exotic ladies on Saturday afternoon. Ah, to be young, those halcyon days before everyone in life that could possibly betray you has seized the opportunity to do so. Goodness, it seems so long ago! Regardless, the wait was only a few minutes. The pricing was definitely high compared to what you can find elsewhere in the city- they wanted $60 an eighth for their top shelf- but the flowers here didn't smell better than anywhere else (see the Denver preface for further bitching on the subject). I also thought the lighting was too low to be able to examine the buds as closely as I'd like. They were certainly frosty, though, no questions there. 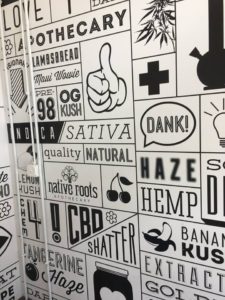 Moving on from the flowers, it was time to look at the concentrates they had available. My Native Roots budtender, one of the most helpful folks I encountered during my super-secret mystery shopping, pulled the slick case out from the display for my perusal. They had four varieties of nug-run, live resin, etc. and I couldn't take my eyes off this golden Sour Tsunami. It was $45 for a gram which seemed a big high but I was all set to have him wrap it up for me when he pointed it out it was a high CBD strain. Whew! This was towards the end of my run and I was not paying close enough attention. I'm not generally a fan of CBD's influence so I turned my attention to the various trim-run shatters they had available. I didn't notice any that were the same strain as the flowers they had for sale, so I felt better about trying them out. They didn't look too bad and I could get two grams for $50. I only wanted one, but, looking out for me, my budtender told me it was a BOGO kinda deal and a single would actually cost me more money. Ok, you twisted my arm, you rascal, I'll take two! Except, whoops, I had run out of cash. No problem there, either! Native Roots accepts debit cards. [caption id="attachment_1884" align="aligncenter" width="720"] 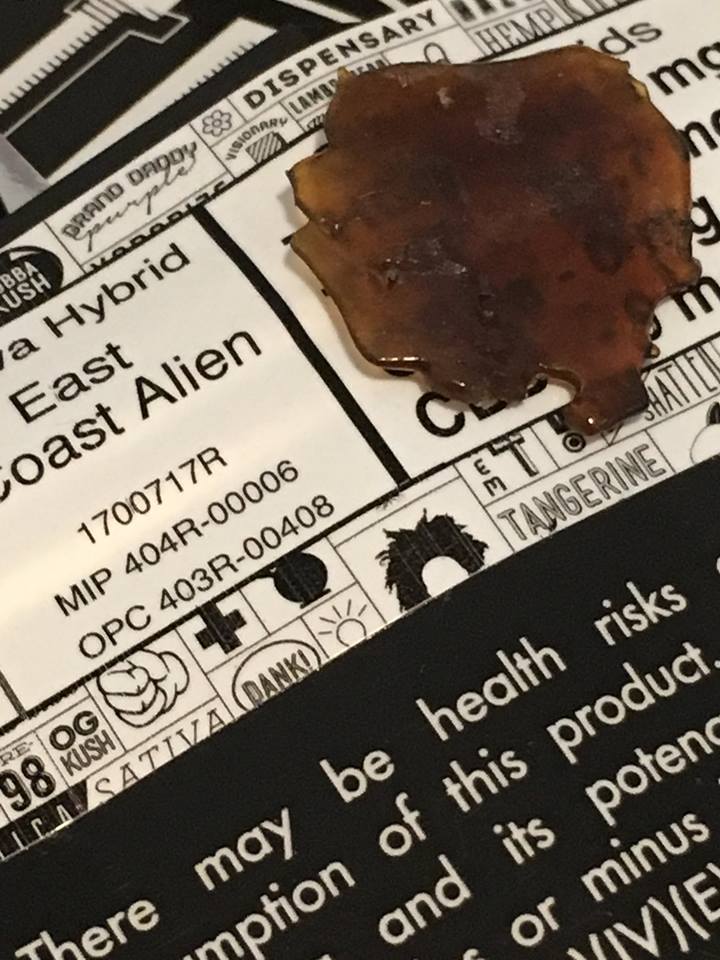 You can just make out some text under the shatter, unassisted by lighting.[/caption] The real reason we started these reviews with Native Roots is cuz one of the shatters I bought was called East Coast Alien and the delightful lyricism of such was simply too fun for a Gentleman to pass up! A little ECA for an ECA, as it were. It's pretty dark stuff, but the clarity is decent and I can suss out a slight whiff of pine when I press my nose directly up on it. The flavor is husky and unpleasant. Many trim-run concentrates produce a dingy sort of high that's easy to differentiate from the clarion effects of a quality nug-run experience. That being said, I was most impressed with the potency- this stuff hits with a punch like Drago! I love the energy and hyper-focus I feel off the ECA shatter, which is equally suited to a long hike or finishing your TPS reports. Of course, when I get that amped up, I am in no mood for Chatty Kathy's! Enter Boss Hogg #6. This indica hybrid was a much prettier amber color with a softly floral, spicy scent. The taste is still harsh, but not as bad as the Alien. The Hogg has good potency but doesn't try to break your brain like ECA. A dab calms me down but doesn't inhibit my thinking, so I can play Madden without screaming about how it keeps trying to cheat me, needlessly upsetting my roommates and their various visitors, girlfriends, and hound dogs. It's not going to knock you out on its own, but it will help you relax and catch some z's if you toke it late at night. It's an excellent hybrid, but better saved for when you can chill out and enjoy it. 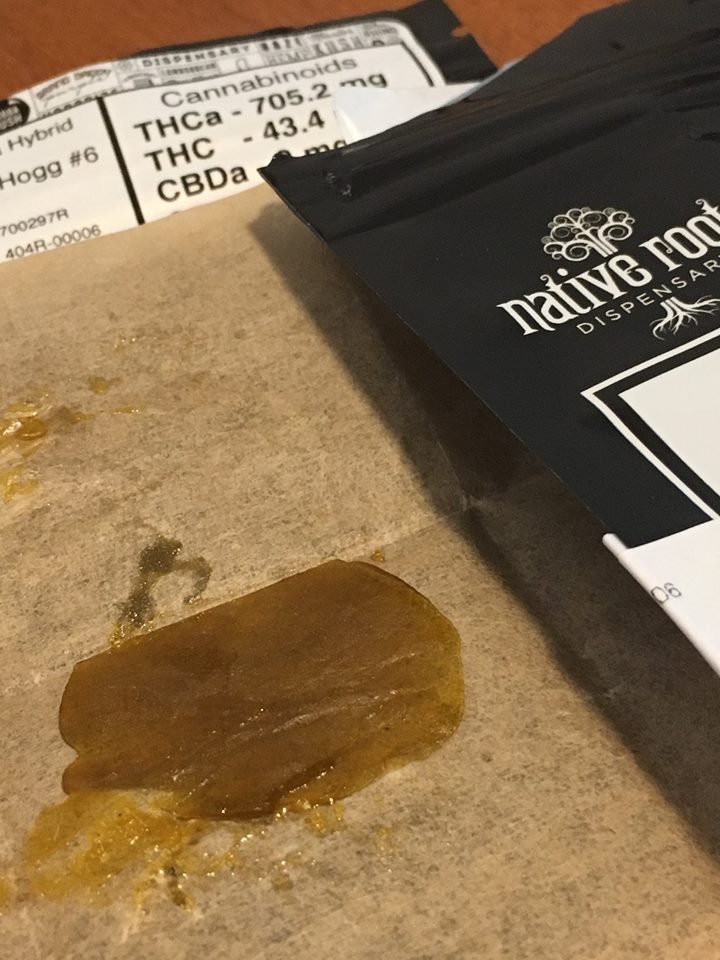 Native Roots was one of the most charming dispensaries I visited on this trip to Mile High City. The prices were high but I expect that of anywhere close to the 16th St Mall and may not matter if you're a tourist weighing the cost of two Ubers into a trip further away into your purchase-making decision. I really think they should improve the lighting, but other than that, there weren't any issues that weren't systemic to what I encountered throughout downtown Denver. Native Roots' Boss Hogg #6 is above-average for trim-run shatters I've had. Overall, I had a great experience at Native Roots, largely due to the friendly, helpful budtender. So long as you're not getting enough to make price an issue, then the Gentleman can recommend this dispensary.