ROIL Extracts Shatter | ROIL Extracts East is hard to miss on Instagram these days and after seeing a billion pictures of their beautiful extractions online, your Gentleman was positively giddy to run into them at a recent cannabis event in DC. Their team generously bequeathed to this Jedi a gram of blend-run Skywalker OG shatter for review and after extensive testing, I can confirm The Force is strong with this one. Dab it, you must! Snacks, what kind did you bring, hmm? While climate scientists rightly worry about the planet's rapid acceleration towards its next Extinction Level Event, your Gentleman fears a hundred more years might be an optimistic estimate for modern civilization anyway. The risk that the upcoming total solar eclipse will tear asunder The Shroud that separates the living, the dead, and the damned is clearly my most immediate concern. To wit, my domicile is equipped with a Costco crate of CLIF bars, a bathtub full of water I blessed after becoming a licensed Jesuit priest online, and enough butane to dab my way through the impending apocalypse. Plus, fire works on every type of undead unless they have like, some kind of special amulet or they're an end boss or something, but I thought of that and blessed the butane, too. HOLY FIRE, BITCHES! WHO WANTS SOME!?! It's difficult to worry too much while I'm dabbing this Skywalker OG from ROIL Extracts, though. This is a blend run, which means they used both flowers (nug) and trim to produce this nearly-translucent golden shatter. It's got a deep, woodsy scent with notes of pepper. The nose translates well into the flavor, and I would be surprised if it did not test heavy for myrcene and caryophyllene. The net effect is heavily indica. This strain will bring on the munchies hard- even if you ate beforehand as an experienced Gentleman would- so you should be prepared in advance. You don't want to be waiting on the delivery guy when you're already eyeing the sugar packets clumped in your kitchen drawer that are gonna turn out to be Stevia anyway.

After a three-course dessert, you're going to want to sleep. And sleep. I finally had an opportunity to try this strain out on a weekend morning and, true enough, I had had enough rest that a single dab put me in a great mood, blaring some Tom Petty and moving right through my exercise routine. A second, smaller dab pushed me back into the couch. I flipped on the ASMR videos on YouTube that I find soothing and promptly passed out for 5 hours. Oops. In between eating and sleeping, I found ROIL's Skywalker OG a powerful mood-booster that kept me LMFAO as Archer's team of entitled incompetents bumbled their way through a seventh season of Hollywood intrigue. 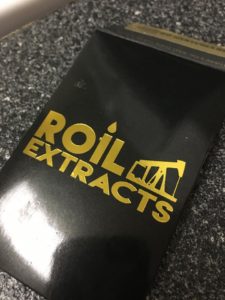 I was just as impressed with ROIL Extracts' packaging as I was the shatter. Glossy UV-coated black coin envelopes with their logo foil-stamped in gold let you know these guys take their brand seriously, and wrapping the shatter in a sheet of silicon tells you they know what they're doing. My advice? Stock up, pilgrim. Even if you are mercifully spared the horrors of defending yourself from the demonic revenants of your dearly departed reaching out to steal you 'cross the Void, you'll still have a nice stash of concentrate. Sweet!