Oh, DC, you lucky little minx, you've already scored another top-flight Initiative 71-compliant cannabis delivery company.  The competition is real!  KindBagDC.com launched mid-September as the vision of one US military vet to Leave No Man Behind.  Far too many of our veterans find themselves without shelter in the land of opportunity, roughly estimated at 40,000 on any given night per the US Department of Housing and Urban Development (HUD), and from that chart, an estimated 223 of them live in Maryland, Virginia, or the District of Columbia.  You can be sure that these numbers carry over to the estimated 22 veterans that commit suicide every day in America.  I know for a fact that cannabis can help some of the mental health issues that lead to suicide, like anxiety, depression, and PTSD.  The government knows it, too, so it is unconscionable that they allow marijuana to remain a Schedule 1 drug with "no medical benefit" any longer.  America's cannabis policy is a disaster.  With the high rate of opiate prescription and addiction in this country,  the billions of dollars to be made by legalizing, and half the country having at least some form of medical marijuana law on the books at this point, even the feds feel the winds of change.  The problem, of course, is the perception that they created of the medicine they now NEED legalized prevents any but the boldest leadership from coming forward as "pro-drugs."  Hey, asshats!  The stoner stereotype is bullshit.  I work twice as hard as the man beside me because knowing you look down on me, as a cannabis patient, puts a Costco-sized sack of Cool Ranch Doritos on my shoulder.  You know who doesn't get any work done?  YOU don't get any work done, Congress, but your coterie of vampires are pillars of the community, and I'm the "druggie?" 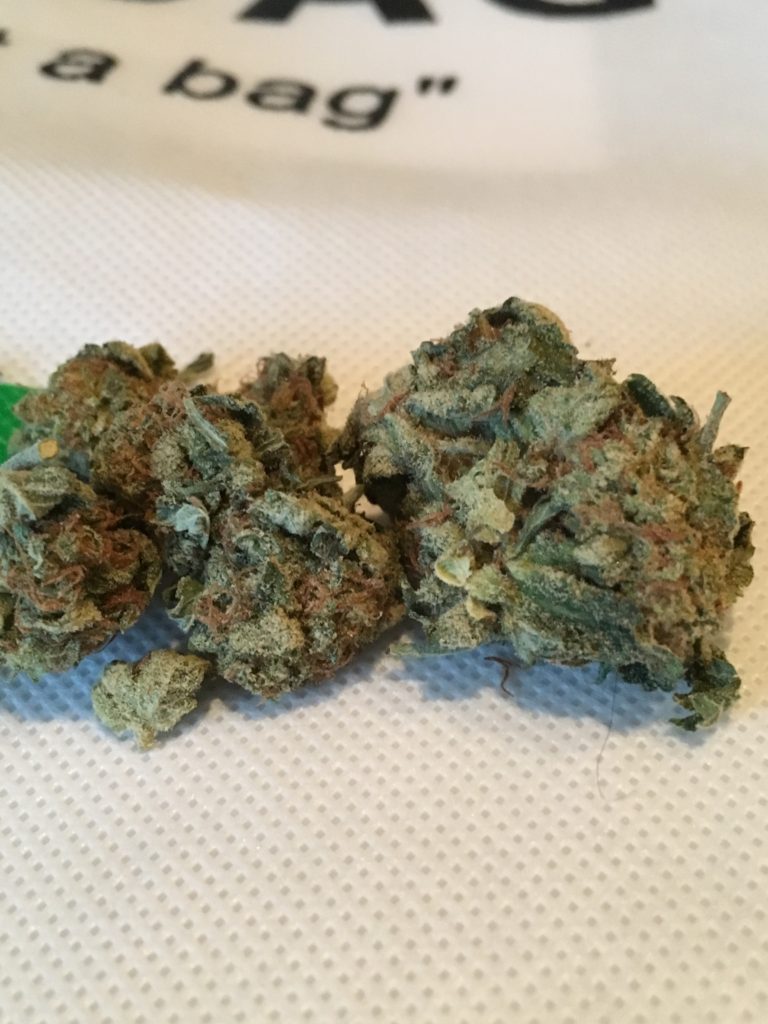 There was more, but I forgot to take a picture before I smoked it. D'oh.[/caption] The Kind Bag DC plan to address the needs of homeless veterans is simple- a portion of your donation goes to a charity called Operation Renewed Hope Foundation that assists homeless veterans and KBDC also seeks to hire veterans first.  ORHF isn't yet rated on Charity Navigator, but tax forms are listed there if you want to check.  Within the odd, rhombic confines of the District, sans federal property, schools, et cetera, your donation to the cause nets you one bag of primo buds and one simple, drawstring bag with the KindBags logo on it.  What stoner doesn't need another bag to carry stuff?  I'm constantly finding my pockets over-stuffed, my pants weighed down with gadgets, lighters, and what not.  But you didn't come to the Gentleman to hear about the bag, you want to hear about The Bag.  Keep your pants on, Clarence!  There's always time for a little romance. The website is sharp and easy to use.  Put one or more Kind Bags in your cart and checkout, simple.  They accept credit card payment only.  They deliver between 12pm and 9pm seven days a week, but you can place your order outside of those hours if you're willing to wait.  I placed my order at 4:55pm on a Saturday afternoon and, true to their claim of delivery within an hour, the courier was calling me from downstairs by 5:43pm.  The couriers are allowed to accept tips, by the way, folks.  Just putting that out there.  Most impressive about the packaging, which is a dispensary-quality clear-front bag so you can see what was inside, is that it arrived heat-sealed, so you know that nobody pinched out of your bag.  Not that I suspect that of any delivery service, but y'all know as well as I do that trust is earned in this game, not given. Inside the Kind Bag was a bag of kind bud- Bubba Kush, to be specific, a strain with such a convoluted history that there's a whole other version known as Pre-'98 Bubba Kush.  I was pleased to see three decently sized buds along with some popcorn nugs, well-manicured, dense, and ideally cured (see pic at top).  A bold, earthy and sweet aroma with the proper Bubba chocolate notes leaps out of the bag, Ha-Do-Ken style, to sock you right in the nostril. There isn't any strain selection at the moment, but the buds delivered are an easy rival to the other delivery weed available and I contend they hold their own against some dispensary flowers, too.  Bubba Kush is a heavy, body-stone indica and these buds deliver as expected.  Smoking it during the day helped me laugh at the idiot box for a while (Season 14 of Family Guy is out on Netflix, by the way), but burns your energy out quick.  I kept trying to take a nap as the Kush brought my overwhelming fatigue to surface, but my mind wouldn't quiet down enough to rest while daylight streamed through the blinds.  It performs admirably as a sleep aid later at night, however.  This strain is well-known for pain management and, if that's your aim, Kind Bag DC's Bubba Kush is just what the doctor ordered, if doctors weren't in the pocket of Big Pharma. In the final evaluation, KBDC was as fast as Red Eye, but with some of the best buds I've seen in DC, and their mission to help less fortunate veterans is admirable.  Buy some weed and make a difference- what more could you ask for?  Kind Bags DC get full marks from your Gentleman.

Please note that policies and packaging can change quickly with brands in the Initiative 71 experiment, so check with kindbagdc.com for the latest regarding payment, delivery hours, etc!