Racists and fascists and narcissists, oh my! After years of listening to the Right bemoan "Emperor Obama" and his executive orders, a flurry of controversial, conservative orders have been passed by the new Muppet Administration. But it's all cool now y'all are in charge, right? Hypocrites. And with a majority in both Houses, and getting to pick a new Justice, it's really just totally unnecessary. And "Alternative Facts." Seriously? This country has shot up 25 whole percentage points on the Orwell chart I keep in my bedroom underneath the mini-b ball hoop in less than seven days! These guys make Vin Diesel's crew look like they're delivering Chinese food on yellow, Hello Kitty-stickered mopeds. So, right, the Dakota Pipeline is back on, the Affordable Care Act is back out, and, of course, the nefarious, clumsily-implemented Muslim Ban that had to be shoved through without forethought or strategy due to a credible terrorist threat I'm sure, um, Kiefer Sutherland waterboarded out of the child sex traffickers at Comet Ping Pong. Even former President Obama has weighed in, essentially calling the new administration a bunch of shit-eating liars. I'm paraphrasing. Look, can we just not start Armageddon in winter? It's really very cold outside and I hate the cold. At least give me some time to adapt to my new ROGUE CITIZEN EXTERMINATE WITH PREJUDICE roving laser drone status before I have to hunker down in the creaky remains of shelled-out midtown office buildings with a motley, paranoid band of weirdos, one of whom is most certainly a mole and I'm going to prove it's you, Scooter, because no goddam adult would really let that be their name so you're clearly a Farking Synthoid sympathizer, in ten degree weather. Is it really that much to ask? Or, no, you can't, because the stolen Pope's blood has already been consumed by the infernal ritual weakening the subatomic bonds between Earth and the Netherworld and it's mwahahahahaha too late to stop anything now? 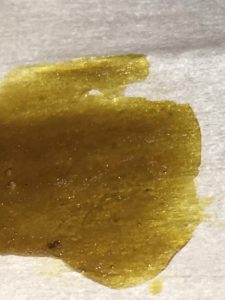 Sooo...I'm finding it extremely difficult to concentrate what with preparing for the impending collapse of civilization and everything. That simply won't do. To keep the Gentleman focused and on task this week, I've been hitting the very tasty rosin pressed out of Jack's Cleaner flowers from local solventless techs Plantgenix. Jack Herer, named after the famous cannabis activist, and its offspring strains are quickly rising up my other chart (of favorite strains, natch!) Like young Anakin, it leans towards the Dark Side, but we don't need to make three terrible movies about it because it's rosin and a little dark is OK. It's easy to work with and has a faint pine scent. The flavor is the real standout here. A piquant blend of lemon and pine, the combination of these terpenes provides a calming, upbeat energy that allows me to direct my attention to the things within my control and not the mind-wrenching lunacy that makes your Gentleman feel like some Lovecraftian protagonist obsessively fugue-walking towards some dark crypt of eldritch horror every time he opens CNN's home page. I was greatly impressed with the clear, abundant flavor in this press from Plantgenix. I definitely recommend you check them out the next time they're hosting a dab bar at one of the District's cannabis events and Follow them on Instagram so you know when that is, silly goose. And make sure you Follow me, too, and I'll be sure to let you know as soon as the demonic cyborg death squads have been unleashed. Godspeed, fellow Citizen. The password is "Kasabian."