Greetings, Tokers! It’s i502drew, your Seattle-ite Satellite, broadcasting my Alpha waves direct to your eye-brains! There’s been considerable chit-chat about a heat wave around here, but I’m not sure where I’m supposed to find it. Guess I’m used to the summer sun baking Chicago streets well into the triple digit temps, or perhaps this basement apartment thing was a clever idea. Either way, I couldn’t pass up the opportunity to start preparing a stash of apocalyptic-emergency strains. Some yummy Terp Sugar from Inflorescence definitely has a place in any terp-hunting prepper's go bag. Bonus, the Permafrost strain will make a sickly ironic twist certain to wrench away what remains of your sanity in case tomorrow turns out to be The Day After Tomorrow or some other lame disaster thriller.  [caption id="attachment_2454" align="aligncenter" width="1080"] 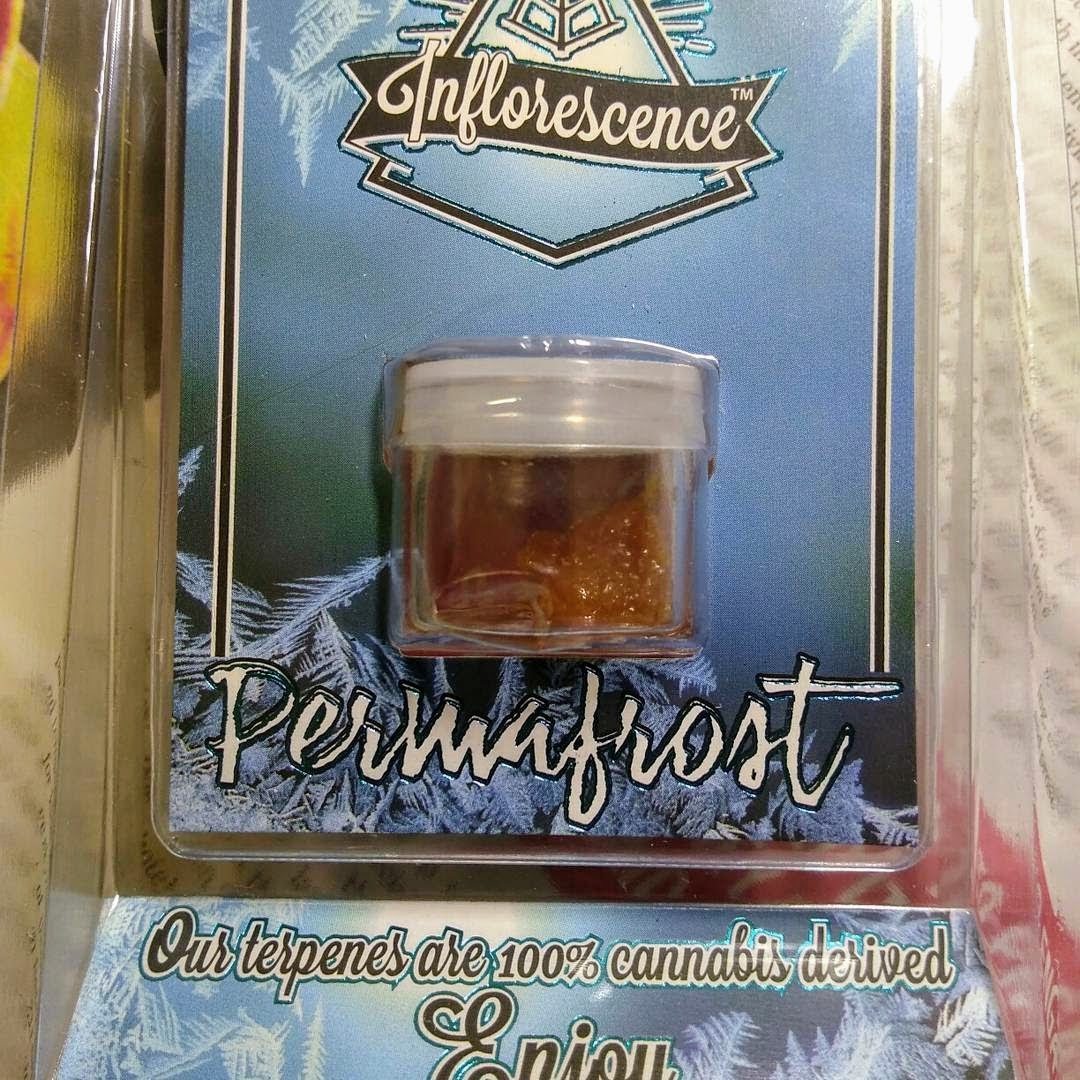 So fire it's frozen![/caption] Not sure exactly what to expect from Permafrost, I do the usual google search for “seedfinder + permafrost”, but I’m disappointed to find that it doesn’t have an entry! You mean Leafly has more strain lineage information than Seedfinder?! Nooooo, this can’t be! Quick, look it up on urbandictionary.com! 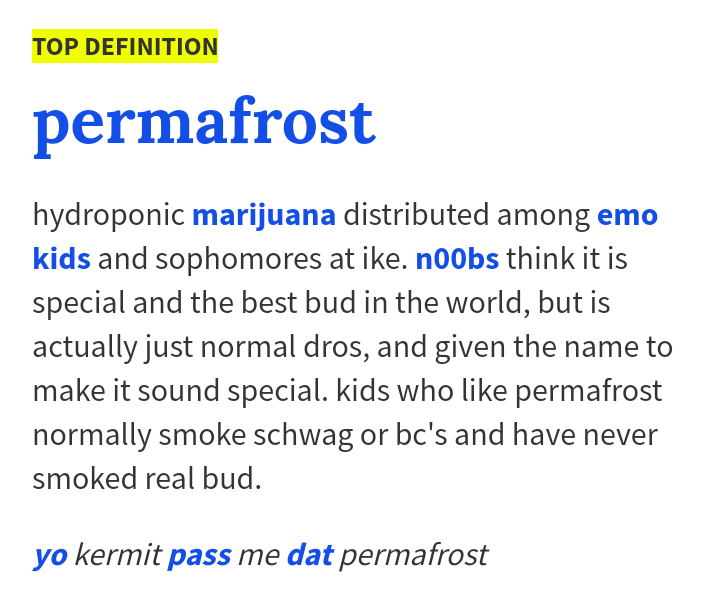 Oh yeah, baby, that’s the one! Who doesn’t want to kick back and chief with The Frog himself? AAAAYYYY KERMIIIIITTTTT! . . . What? You want me to admit I was WRONG about something? Fine: Seedfinder isn’t perfect. Sometimes, you will run across a strain that doesn’t have a standardized version or consensus on where it came from. In that case, Leafly does the best job of tracking of what retailers are selling. Just don’t forget to call and double-check current inventory when using Leafly for menus. [caption id="attachment_2455" align="aligncenter" width="1080"] 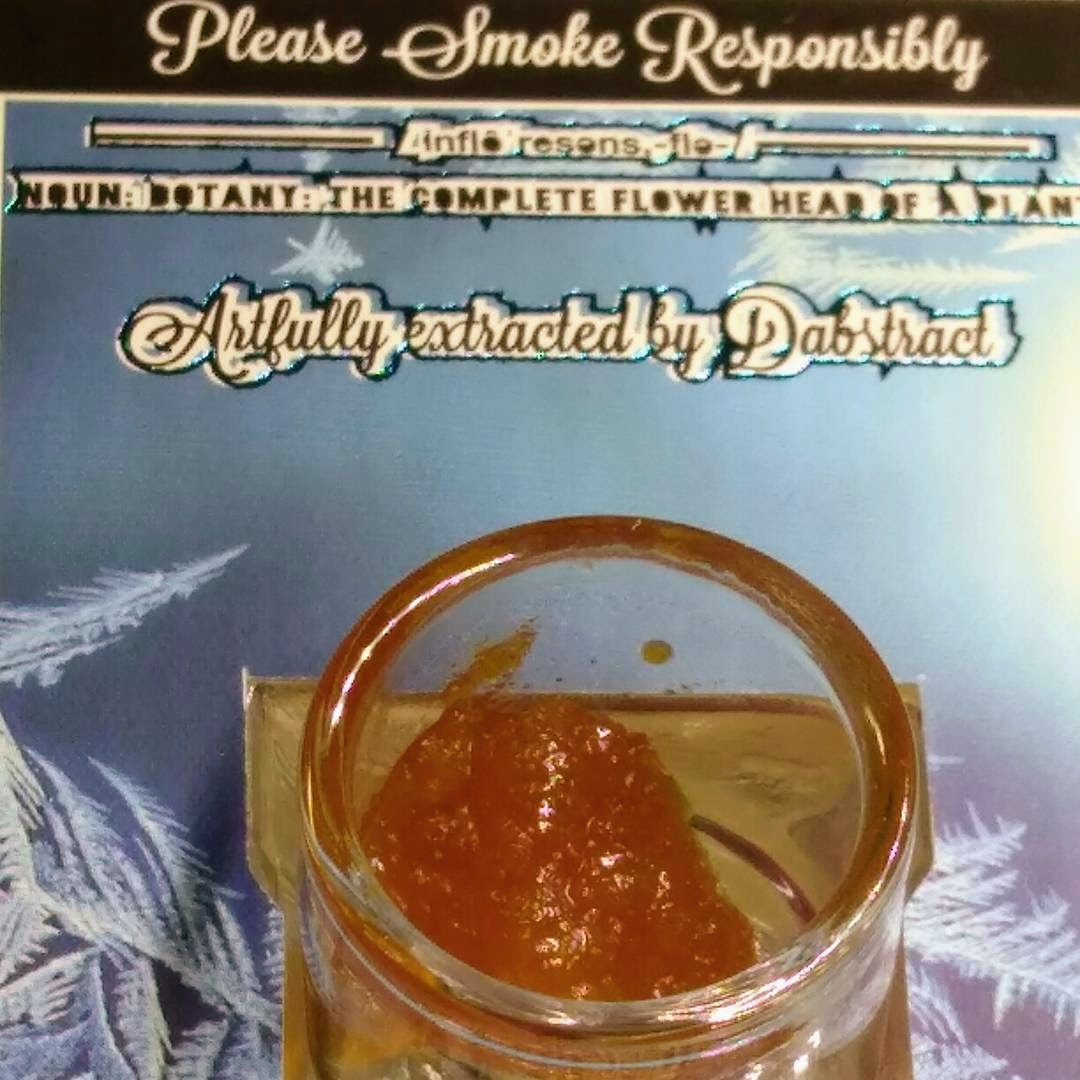 When I dab into Permafrost Terp Sugar, I get the cool sensation of skiing against a rich, blonde bully to win the resort deed, cheered on by a cast of lovable goofballs...[/caption] The first noticeable thing about this Permafrost from Inflorescence (extracted by Labs of Dabstract) is the flavor. If I was renaming Permafrost I’d call it ‘Cool Mint Kush’. The second thing I noticed was that my standard sized dab provided twice as many tokes of tasty kush vapor as I’m used to. Chalk that up to the higher boiling point of this killer minty terpene profile. I wouldn’t be impressed if food grade or otherwise non-cannabis terpenes were involved, but when it comes to concentrate flavor profiles, Dabstract has been killing it since the beginning. At one point, retail stores were full of artificially candy-flavored extracts but, thankfully, such products are no longer allowed in I-502. [caption id="attachment_2456" align="aligncenter" width="1080"] 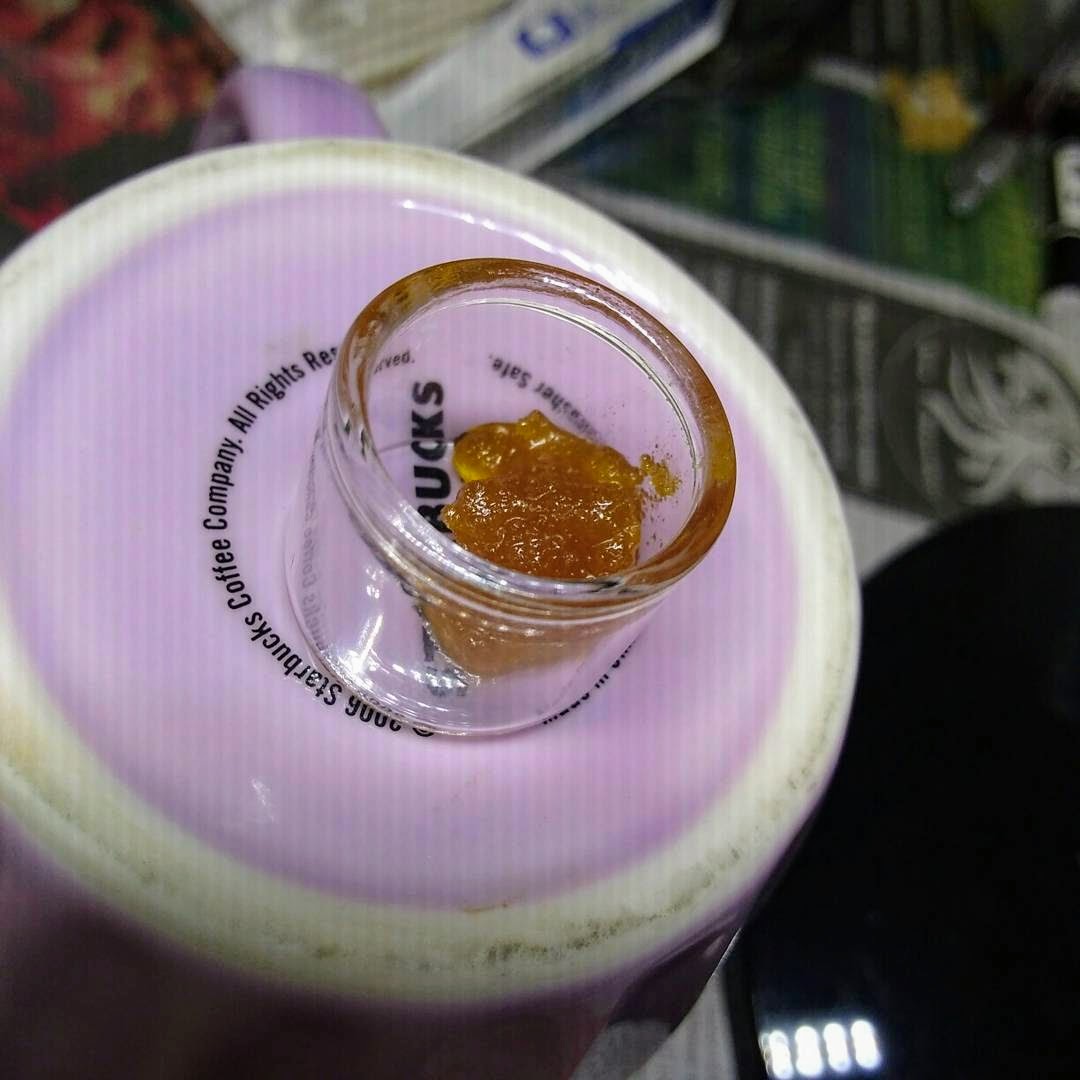 I think Seedfinder might be missing out...[/caption] Finally, I can agree that fans of Permafrost are onto something. As one would expect, the unique aromatic profile seems to play a distinct role in the experience. It’s uplifting and balanced. Not too stimulating, but I find myself functioning quite well even with very high dosages. If you’re planning to be discreet, you’re probably gonna need some eyedrops. What stands out about the Inflorescence/Dabstract Permafrost collab for me is that, in smaller doses, I feel less energetic. My suspicion is that the minty terpenes have a higher boiling point than the cannabinoids, and therefore the first couple low-temp tokes of my vape pen don’t vaporize all of its terpenes. The resulting effect being that as I continue to take puffs, the remaining oil has a higher concentration of mint terpenes. It's also the case that the exact opposite reasoning makes arguably as much sense as mine, so this is case of “You gotta try it out for yourself”. It's for science, Ma! If you’re not confined to Seattle’s downtown and near-north neighborhoods, there are usually worthwhile sale prices at stores in the Lynnwood and Everett areas. This time I stopped at Local Roots in Edmonds and paid the very reasonable $45/gram price for Inflorescence's terp sugar, which is also what they charge for Bodhi High Blue Dream. The Local Roots menu in Everett, however, has the same Blue Dream for only $30/g. If you have the patience, hunting for deals in Seattle will definitely pay off. If you don't, then read more i502Drew here at GentlemanToker.com!