So what’s a cheeky little cherub such as moi doing in Sin City, you ask? Ah, you read the title, spot on! This is indeed the one year anniversary of GentlemanToker.com and coincidentally, or perhaps by karmic design, this most jubilous date coincides with the first day of recreational marijuana sales in Nevada. So I figured, what better way to celebrate than working? Hahaha. Today it’s all about weed in Vegas, baby! 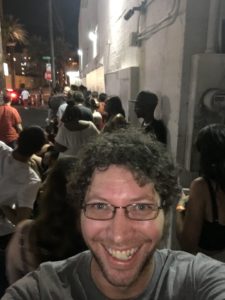 Several medical dispensaries that now hold licenses to sell recreational marijuana were open last night at midnight to kick off the first day of sales. I went and stood in line at the downtown Essence Vegas medical marijuana dispensary at 2307 Las Vegas Blvd which, by the time I arrived (12:40am), extended all the way around the building.

I didn’t get inside until after 2, but the line was anything but boring. First a team of street hustlers showed up to try to sell weed to the folks in line. A heavily built, tattooed young man with a French-ish accent exhorted us to purchase his OG #18 instead of waiting in line and assured us there would be no good weed inside for us in friendly, carnival barker fashion.

His young assistant went up and down the line with stickers, looking for takers. As far as I could see, there were none. Me personally? I was here to wait in line and while I knew he was talking shit, if I had gotten up and the bud was sold out, that’d be my story today. Journalism, baby!

They cleared out after an awkward ten minutes or so and then a guy came through in a pick-up truck and shouted that he had Gelato Brass Knuckles available. Again, no one was interested in leaving the line.

Our new friend lambasted us “Y’all don’t even know what that is, huh?” and took off. Yeah, dude. We know you’re selling weed. We’re here to buy weed legally from the store for the first time in Nevada, to take part in history. Chin up, old sport.

Next one of Essence’s regular medical marijuana patients showed up. This guy is in a sports car emblazoned with marijuana company stickers that I, a fellow industry maven, recognize.

First he insists on parking in “his” spot which the valet tried to explain to him was unavailable because, you know, we’re all standing right next to it. He parks there anyway and catches some static with other folks in line at which point he informs us of his medical status with the clear implication that he is more worthy of weed than we who’ve been in line over an hour.

He told us that he’d call in to the dispensary and either he’d get ushered in or they’d serve him outside. Your Gentleman was doubtful- can you imagine the optics? Several minutes later, I was proven right. Dude apologized to folks for his behavior, very classy, and took off. 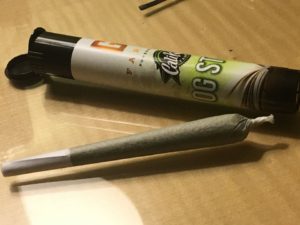 Medical folks, don’t be dicks. I believe that all use is medical but even if you don’t, how do you know that a Gentleman isn’t waiting in line, desperate for medicine after his long flight but doesn’t happen to have a card for your jurisdiction?

I need my meds every bit as much as you do, lest I lose control to the Dark Ones howling in my mind to satiate my unnatural thirst on the heartsblood of mine enemies. Don’t let the word ‘recreational’ throw you, my bosses. We are united under one cause and any other day, nobody’s gonna think twice if you get to go first.

Essence may be the best dispensary I have ever been to. I clearly haven’t tried all of their product yet, but there is so much goodness to unwrap here. The store was bright, large, and orderly. Despite the line, I didn’t feel overly crowded when I got to the counter.

The service was out-fucking-standing. These guys were neck deep in people, some of whom had never been to a dispensary before, and my budtender made me feel as though we had all the time in the world to look at their different shatters and crumbles and dry sifts and oh my gosh the selection in this place!

My budtender wasn’t just extremely knowledgable- you’d have to be to rock the nickname Terp Joe- he was affable, downright eager to talk about all of his favorite products and pointing out which he thought presented good value. This dude may be the best budtender I’ve ever had- seriously, give him a raise- but I was observing the other folks at the counter and everyone was so sincerely friendly.

A prowling energy vampire like myself could just soak in the positive vibes here. A printed out note for the staff had been turned so I could read it, stating that they knew tonight would be stressful, but that they’d get through it as a family. Now, if that doesn’t just fill your heart with more warm fuzzies then a kitten on YouTube! 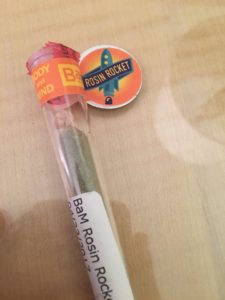 I needed a wax pen to try out Sin City’s concentrates and not only did they have one for me, the manager gave me 15% off just because! Nah, I’m kidding, there was a whole micro-interaction where I must have flinched when he said it was $70. Still, super damn cool.

Oh snap, I also got a free preroll for giving them my phone number! I’m not expecting much on that front based on what our new contributor i502 Drew had to say about prerolls the other day but free’s free.

The products that I have tried out live up to the hype. I love caviar joints, as you may remember, so I picked up a couple (I’m celebrating, remember?) of BAM’s Rosin Rockets. A nice, fat gooey pocket of rosin is added in with the flower, just past the first six hits or so, and you know when you hit it cuz the burn goes slow and that smoke has suddenly got you dab coughing. For real, I had to put it out half way and go blow my nose.

I’ve only tried the White Nightmare so far but I haven’t even technically finished it yet and I can’t start the Gorilla Glue/Forum Cut Cookies until I do. Rules, mister! I am satisfied with this product at $22 each. I got a regular old spliff, too, a one gram preroll of OG Story from Cali Kush Farms for $9 that smelled sweet, smoked smooth, and was quite enjoyable. 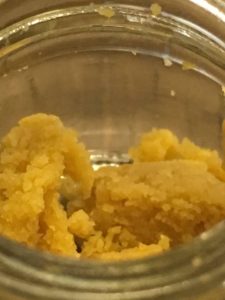 When Terp Joe wanted to show me crumble, I was doubtful. Then he let me smell it. Ooowee, this Blue Frost crumble from Desert Grown Farms, extracted by Alternative Medicine Association, has some terps to it! It’s woody, spicy, maybe a dash of cinnamon?

Why guess, when I can just look at the label? That’s right, the terps are tested and listed! OMG! Heaviest in b-Caryophyllene at 6.99 mg/g, with Limonene clocking in at 4.67, Linalool and Humulene both around 3, beta and alpha pinene both coming in around 1.

I love this so much, can we do this everywhere, please? Very pleased with this product for $45/gram. An excellent hybrid, I feel calm and energized (I’ve been smoking on this as I write). Some concentrates hit me with the munchies hard in the morning if I take them after a light breakfast, but this has gracefully allowed me to continue writing for an hour. Now if you’ll excuse me, there’s a pizza buffet somewhere in this town with my name on it.