Heya, folks! As promise-ish-ed, your noble Gentleman has returned from his journeys to distant vistas to deliver a long overdue correction to one of my older, meh reviews of an Initiative 71 delivery service called Juicywana. Much to their credit, they realized there was room for improvement, too, and reached out to me post re-launch as JUICE'D to get my thoughts on the new gifts. I love the array of classic flowers I was able to sample and am quite pleased to report their position in the top tier of options available. Ok, so first of all, I have an alibi for whatever it is you think I did this week. I drove down to Miami! And I've got, like, nine thousand mosquito bites to prove it. Thanks, Florida, now I have to check to see if I got Zika'd, my seed forever cursed like Cain's, an unwilling progenitor of a microcephalic plague just to stretch my legs in your precious Everglades for five minutes. Wisely, I retreated back to the beach to go CSI LARPing but it turns out that a grown man in a trench coat and shades, quipping to himself about grisly seaside massacres while blaring The Who through his phone puts folks a bit on edge in 2017 and I was strongly advised by authorities to go play my weird game somewhere else. [caption id="" align="aligncenter" width="480"]

"Oh, you don't validate? No problem."[/caption] I'd have gladly given the Donald a ride down, by the way, but I guess our intelligence agencies aren't forwarding the recordings of my phone calls to him after his latest attempts to harakiri the remaining dignity of our dear Lady Liberty on the international stage. Can you imagine reminding a foreign head of state that the country you are now leading tapped her phones in PUBLIC? I nearly fainted. My poor monocle, alas, lies shattered upon repair. Listen, Donno, we might not see eye to eye on anything at all, but the Gentleman would have made some seats in his surprisingly roomy Japanese compact for you & your entourage to keep Meals on Wheels rollin for the rest of the year. Way to shaft those veterans that you were gonna take care of. Of course, that's just the tip of the icebergs on the horizon from this week's headlines. I can't even choose a favorite between the blueprints & evacuation plans for Trump Tower getting stolen and still at-large, walking back the apology to Great Britain over baseless wiretapping-collusion claims, or the former ambassador who took to Twitter to EXPLAIN TO THE UNITED STATES PRESIDENT HOW NATO WORKS. No, wait, what about Ronald McDonald himself telling Orangey McBoatFace to fuck off? Heavens to Mergatroid, the sheer amount of chicanery afoot has overloaded my delicate sensibilities already. Let's get to the buds. No seeds in these JUICE'D brackets, folks, just impeccably-groomed, dense, and seductively aromatic buds from well-established programs like Blue Dream, Girl Scout Cookies, and one of my personal favorites, OG Kush. The nugs are still fresh and covered in delicate trichomes. Consistently hitting on a prime expression of each of these strains is an excellent indication that the JUICE'D team is hitting its stride at the right time. Not to mention, each arrived in a metallic, bright green smell-proof sack featuring the Juicy J and the strain name. Kudos on the sharp packaging, fellas. [caption id="attachment_1790" align="aligncenter" width="225"] 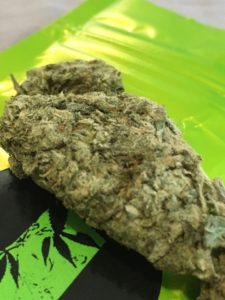 Blue Dream[/caption] Blue Dream is one of those strains I enjoy, but doesn't usually do enough for anxiety to use as daily meds, so I save it for when I don't have anything to do even though it's too energetic to help me sleep. This particular flower is quite pleasant and asserts a powerful mood adjustment that helps compensate for what it lacks in relaxing your Gentleman's specific mental agitations. This same, strong correction for the humours make it an equally great choice for socializing or digging that friction-worn, logo-faded b-ball out of your closet, dragging your lazy ass to the nearest court, and spraining your ankle mimicking the twenty-year olds on TV. You ain't bringing nothin but bricks to my house, grandpa! [caption id="attachment_1791" align="aligncenter" width="225"]

GSC[/caption] Their GSC was exemplary among the many different variations of this strain I've sampled. The giddy, sativa head rush is potent enough to ease you into a midday nap. While you aren't necessarily couch-locked, especially if some coffee is involved, I preferred to be couch-adjacent when I indulged in these Cookies, which I enjoyed more in the evening when I could chillax & enjoy some tunes or tubes like us righteous bros do. And shed a tear to see my favorite menage-a-braj, Workaholics, end after seven seasons of bowl-schmokin office shenanigans. [caption id="attachment_1792" align="aligncenter" width="225"] 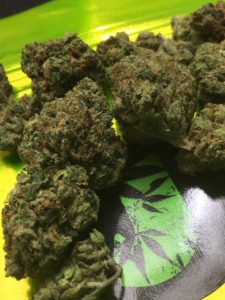 OG Kush[/caption] But I'm always going on about OG Kush and this joint right here, haha, is why. Juicywana came thru with some of that super-stylish ocean-grown perfection that so many tokers know and love. This strain delivers on every level for me, blasting through my daily fatigue, elevating my disposition far above depression's reach, and eliminating anxiety. Exactly what I need to get through my day but with that mas fuerte to help you catch a few z's later on. I could smoke this OG Kush all day, so I did, and laughed my face off to my new favorite show, Review. I mean, right? I'm like, living that guy's life, sorta, or he's, like, making a joke out of mine, like Schrodinger's Butterfly or whatever. Summary! JUICE'D equals happiness. You should try some. I think you'll be very pleased. Here's the link to the their site and you can Follow them on Instagram now, too. Can't wait to see what these strains are coming down the pipeline next! And, yeah, the juice is still bangin.