Khaos Confections is one of the newest brands gifting weed edibles in Washington DC and even though I technically don’t even “do” edibles reviews at the moment- my unnaturally (supernaturally, perhaps?) high tolerance makes it a really unfair handicap and I am super not into letting anyone else write reviews for GT. Ha!

But chatting with the knowledgable KC folks at a recent sesh about the increased bioavailability provided by utilizing RSO in cannabis edible infusions got a Gentleman all hot and bothered to try some out. Talk weed geek to me, baby!

RSO stands for Rick Simpson Oil, by the way, named after the PhoenixTears.ca founder who spread the knowledge of how to extract oil from the full cannabis plant (that’s why you’ll also see it called FECO, Full Extract Cannabis Oil). Anecdotal claims attributing miraculous healing abilities to RSO abound; I was curious to see what it could do for me!

Your very own Psychonaut Prime began his descent into Khaos late last week, a few days before the DC Edibles Festival. The guys had loaded me up with a bevy of treats to try, all packed in heat-sealed blackout bags.

Now, they’ve actually got one of the most robust menus I’ve seen around, with plenty of savory fare sure to excite District foodies that crossover to our humble canna-community, infused pastas, locally-sourced honey…but I’ve got that weird eating disorder that I always mention but never talk about. Let’s do that briefly and get it out of the way, shall we?

It’s called ARFID, it’s a new inclusion to the DSM-V, and basically it means this- whereas your brain sees a delicious plate of say, lasagna, and starts pumping power to the salivary glands- mine sees a pile of garbage unfit for consumption.

I can’t eat a salad anymore than you can scrape your Grand Slam outta Denny’s dumpster and save yourself a cool four dollars, ninety-nine cents. After forty years of the same foods, I’m not really into eating in general, but thanks to cannabis, at least I can still manage an appetite. 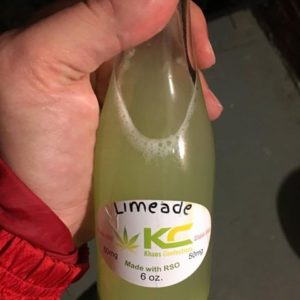 But why bother when I can drink my medicine instead? Khaos Confections’ Limeade was a tempting first subject for this reason and I downed the bottle at 10pm. About an hour later, the fatigue was real, and I slipped into bed for a sound night’s sleep.

The next night I went for the packet of sugar-frosted hard candies, which had the perfect degree of fruity flavors, not too subtle, not overpoweringly sweet, but ultimately produced a similar result- a light buzz followed by a good rest. I needed to give the gear a real workout before the Edibles Festival, so I went for the Triple-Chocolate Walnut Brownie for breakfast.

An hour later, my body felt totally relaxed, my mind exceptionally calm, buffering me against anxiety. Returning to bed was tempting, but I went for a brisk walk instead, and getting my blood pumping brought me up to a nice equilibrium. I was ready for the Edibles Festival. 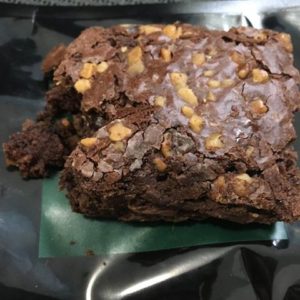 Khaos Confections was the primary sponsor of the event and had a booth set up just inside the door- once you got through the impressive line. I hadn’t seen anything like this in the last year of events and it should have been my first clue that DC Edibles Festival was going to be a different beast.

The popular nightclub was packed with visitors that had clearly come to the city just for this party. I ran into the dude that sold me my car there. The enormous venue kept a few clear spaces to catch your breath, grab a seat, or burn one outside away from the madding crowds enthusiastically assailing the vendor tables.

Phone Homie was a natural, energetic emcee with a solemn duty to keep the party Terpin’ It Up! Kudos to the club for keeping the music at a reasonable volume for a Sunday afternoon. I know that sounds, like, eww so old, but everyone at these things likes it when they can actually talk to each other. 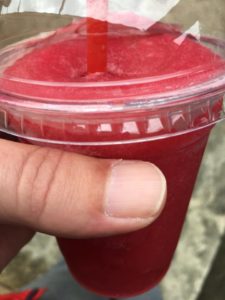 Khaos happily shoved a cup of slushy in my hand when I walked in the door. They had coffee, too, and I love fraps, but the hibiscus lemonade was delicious. I downed the drink over the next half hour and it began taking effect shortly. Must have been sativa in that one, cuz I leapt at the chance to catch up with an old friend and spew venomous, paranoid bile at him for as long as he’d agree to listen (about ten minutes, he’s a really good guy).

A short while later and I was feeling quite woozy and light-headed. I needed something non-infused in my stomach right away, followed by a solid nap. Time to catch a ride and bid farewell to the best cannabis party DC has seen by far.

So Khaos Confections’ line of edible medicine definitely got to me, despite being around only 50mg in each dose. If you are also very experienced with edibles like your favorite Gentleman is, and you’re interested in shifting your consciousness a bit further, I’d say 75-100mg of their RSO-infused desserts will do well for you.