Doja Pak made its name in California’s medical market during the Proposition 215 era and has grown into a major player in the state’s retail space since recreational weed sales became legal. Many people consider Doja Pak’s weed to be the measure of elite retail grade cannabis. Ryan Bartholemew, cannabis industry veteran since 1999, has run the brand for around five years.

Doja Pak started as a Weedmaps delivery service, serving bud grown from their 12-light garage setup. Through the relationships forged with other Prop. 215 operators in Sacramento and the Bay Area, they started pushing wholesale flower from brands like Connected and Cookies. Now, Doja has facilities all over the Sacramento metro area and Humboldt County, with 1000+ lights at each indoor facility and massive acreage for their outdoor grows. Doja’s most popular strains are collaborative projects with Archive Seeds, Deep East and Wizard Trees. The Darwin Farms brand procures a good portion of Doja-grown ganja to sell under their own label, too.

Bartholomew threw a party at the long-running Spaceship DC cannabis event venue to give the DMV a look at the new, authentic packaging and Doja Pak’s newest and most popular strains. What a fantastic idea to build brand trust in a market like DC’s! I’d love to see this become a thing now, but let’s digress.

Partnered with popular I71 brand Esperanza Gardens and flanked by two of his closest associates, John Doe Supply Co. and EK (@doja_chicoshyne & @doja.ek.916 on Instagram, respectively), Doja Pak introduced three brand-new strains. The first was the lovechild of their new Helium strain (Zkittlez x OG Eddy) and Bixcotti, recently christened “Hindenburg” after the infamous exploding zeppelin. The others are unnamed for now, a Bixcotti x GG x OreoZ cross and a Sherb x Cherry Gelato cross.

Some people who skipped the event weren’t convinced it was worth waiting 90-plus minutes in a smoky line to get in. It totally was. This event was one of only a few opportunities I’ve ever heard of where DC locals could meet Doja Pak himself and familiarize themselves with these flowers straight from the source.

The DC pop-up scene has all but completely disappeared over the last couple of years. A lot of pop-ups before the pandemic were raided or dispersed, with extract-centered events being hit most frequently (extracts are not explicitly covered by I-71). Despite DC having legal adult-use, retail sales have been prohibited by Congress, so events are promoted in a relatively underground manner. Spaceship has proven to be one of the few successful venues, hosting several events a week. Doja Pak’s party, thankfully, went off without a hitch.

Doja’s mylar bags are known for being ornate and well-designed, to the point where many enthusiasts worry about fake bags (a common problem for large-scale West Coast brands), so they changed things up on this run.  Instead of a colorful and ornate design for each strain as seen with the RS-11, Rainbow Belts, Rainbow Sherb, Zoap, RS-54 and Bixcotti bags, Doja Pak has scaled the design back to put the logo front and center over a monochrome dot design. On the back, you have a Doja authentication seal and a label printed with the strain name and other info like cannabinoid percentage and packaging date.

I picked up a 3.5g pack of the Bixcotti x Glue x OreoZ. While it was not my first time smoking Doja Pak flower, this was the first time I was able to get the flower directly from the source in a factory-sealed, nitrogen-packed bag. When I get flower imported from the West Coast, it’s usually months out from the packaging date, packaged in a large vacuum sealed bag or a larger transparent “turkey” bag and tightly trimmed to the point where it looks and feels like rock. In this case, the flower was only a couple of weeks out from packaging, expertly trimmed, and covered in frosty cloud-white trichomes.

Doja Weed: Worth The Price?

Doja Pak is the barometer of quality in California and a must-try brand for anyone who’s interested in West Coast cannabis culture. On the Doja Pak community Telegram channel, Bartholomew made his love for the East Coast clear, but that seems tricky to show in a part of the country with relatively few opportunities to circulate his fine cannabis.

The Doja Pak brand is in almost 100 retail locations in California. They’ve got a huge billboard over the Hollywood Walk of Fame, and the “exclusive” on the bag is absolutely warranted. Doja’s RS-11 strain lit the whole world on fire when it dropped last year. The demand for RS-11 (Sunset Sherbert x OZK Pheno #11) in Europe is higher than almost any other strain in history. EU users on Doja Pak’s community Telegram account are constantly clamoring for RS-11, leading shops like the Netherland’s Dizzy Duck to stock a steady supply.  Connoisseurs reviewed the drop in High Times and Leafly, and review accounts on Reddit, Instagram and Discord described the plant as having a truly unique flavor.

During his appearance on the First Smoke of the Day podcast, Doja Pak explains that his operation is mostly distribution (around 78 minutes in). Having pushed Connected’s work for years and boasting strong relationships with Alien Labs, Cookies’ Berner and Mario Guzman of Sherbinski’s, Bartholomew has amassed serious buying power — but that’s not the extent of his operation. Doja Pak also works with cultivators and affiliate brands all over Northern California to hunt for and deliver some of the most elite cannabis destined for retail. We’re not talking middle-shelf, mixed environment, plain label, daily driver bud here! These are fresh flowers, trichome-covered, smooth-smoking, flavorful, with intricately-planned genetics that leave nothing but white ash behind.

With all these enormous facilities at their disposal, Doja Pak runs pheno hunts that start with 100 or more seeds. For the Rainbow Sherb phenos, Doja believed that the potency from Sherbinski’s Sunset Sherbert played off a guava pheno of OZ Kush in a way that mixed consistently outrageous potency with distinct flavor. They were lucky enough to find the mixture they were looking for from the eleventh plant they ran during that 100-seed hunt, but they also found strong, distinct expressions from the #54 pheno, the F2 cross, and later the #40 pheno.

According to Doja, the #18 pheno is a more “key lime” flavored smoke and was the original Rainbow Sherbert pheno that he’s been smoking personally for almost a decade in Sacramento. Wizard Trees and Doja have both stated that they like the RS-11 because of its even distribution of candy sweet and gassy fuel flavor. Blackleaf and Doja both asserted on the FSOTD podcast that the benchmark of fruity flavor in cannabis lay with Forbidden Fruit, Blueberry and Tangie, which are much more vaguely rotten-berry sweet rather than the distinct candy flavor you get from the Sherb and the Zkittlez genetics.

In addition to RS-11, Studio 54, Zoap and Rainbow Sherb #40, Doja Pak is mainly known for two other strains. The first is Rainbow Belts (Zkittlez x Do Si Do reversal), which was originally bred by Archive Seeds. The second is Bixcotti, a rebranded cut of Connected’s Biscotti (Gelato 25 x South Florida OG Kush) cultivated by Doja’s crew. These seem to be marketed as their lower-tier options, despite Doja stating that Rainbow Belts is one of his favorite Doja Pak offerings because of the Zkittlez flavor.

After trying Doja Pak’s Bixcotti x Glue x OreoZ, I’d say that the strain is not perfect. I would place it on the enthusiast tier of cannabis rather than what I’d consider elite or connoisseur grade. There are a lot of things to like about the strain, such as a gorgeous nug structure, excellent freshness, exotic tinges of purple and a pungent scent filled with doughy and fuel-tinged notes. Unfortunately, the flavor and effect profile just didn’t land with me. My personal preference tends to stray more towards the sweet funk from OG crosses than the more earthy expression from Gorilla Glue, and Oreoz can have a bit of an overwhelming effect.

Additionally, this cross did not seem as stable as Doja’s Cherry Gelato or Darwin Farms’ Zerbert, which have much more dialed-in effect and flavor profiles. This is probably indicative of being a brand-new cross. Overall, I felt like the beginning effect was not proportionally potent to the burnout I felt after the comedown. The Hindenburg strain probably would have been more my speed.

All in all, the meetup was the best part of the Doja Pak experience. Getting to meet die-hard West Coast bud fans, Doja affiliates, local vendors, friendly faces from all over the DMV area, and even Doja himself for a brief moment was special. Getting to spark up some of the bud I brought for waiting in line with people was something I sorely missed during the pandemic, and I have to give Doja major props for making it all happen. At the end of the day, if you have an opportunity to go to an East Coast event with a West Coast cultivator, I highly recommend it.

A few weeks after the meetup, Doja officially named Bixcotti x Helium (Zkittles by OG Eddy), “Hindenburg” and I decided I had to try this strain out for myself. I got some from a vendor by the name of @spacekadetz.co on Instagram, who was referred to me by a trusted local Doja Pak wholesaler. I was able to get a 3.5g pack for $90 – about $20 more than suggested retail – and was excited to see if the strain was worthy of its explosive name.

The bud came in a retail sealed black mylar bag with a heat transfer label and authentication seal on the back. The label boasted 32% THC content, but I take that metric with a grain of salt because it’s not necessarily indicative of the overall experience. Opening the bag, I was met with the Doja exclusive print over iridescent mylar and some incredibly pungent, dense, tightly trimmed deep green and purple nugs. 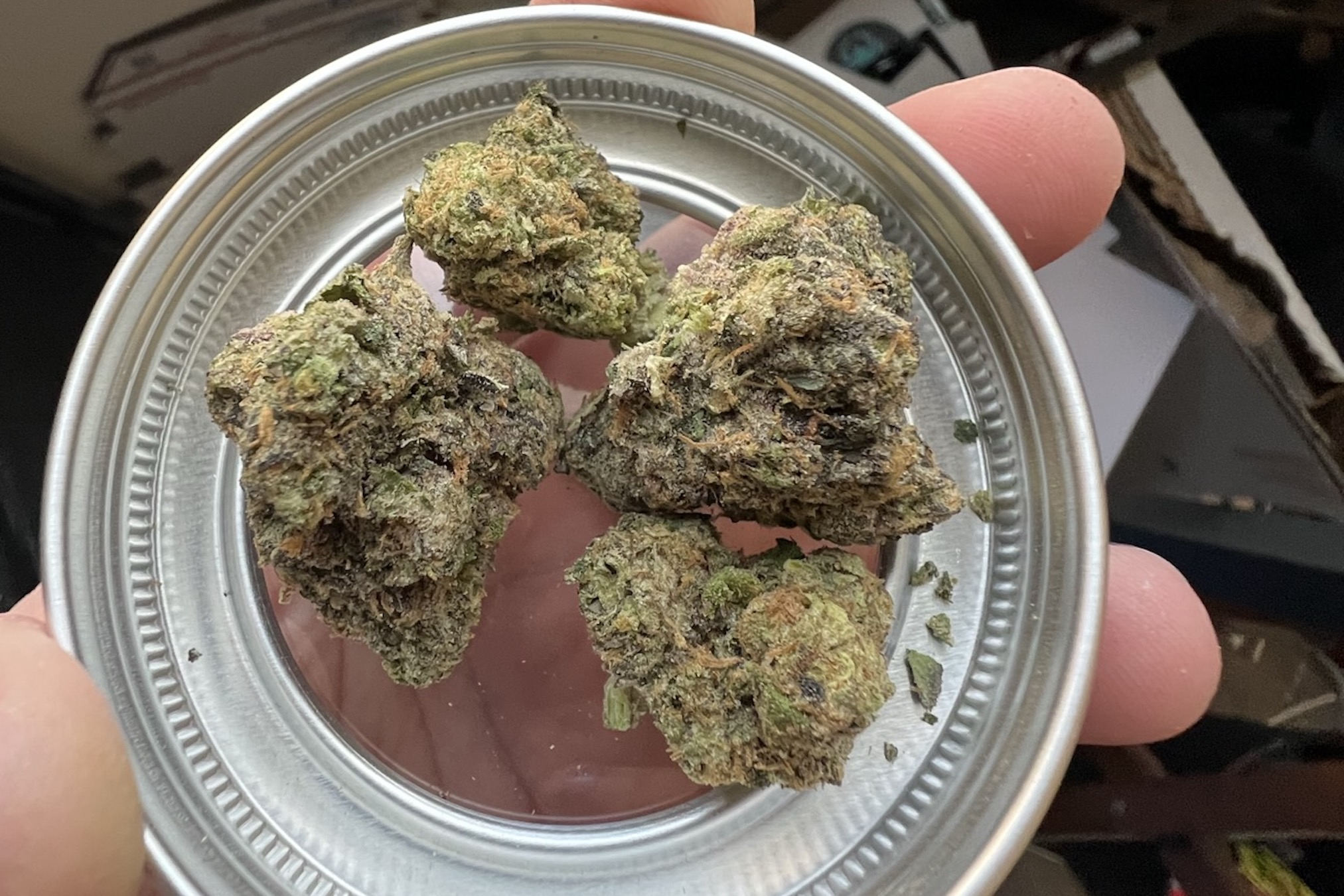 Many California brands are chasing a wave of “candy gas” aroma and flavor, and this strain is no different. It mixes the sweet grapegruit-lime funk from Helium with the doughy-sweet and fuel notes from Bixcotti. On grind, the scent and flavor became even more pungent and distinct from the lime green blend. This strain arrived fresh (its packing date was 10/24), so it was covered in trichomes and easy to mold into a joint or bong slide. If you’ve ever watched one of Doja’s Instagram stories or YouTube videos, he always smokes joints with no less than a full pack of Doja weed, and the joints burn consistently almost bone white. This imported pack is no different, smoking quite smoothly. The flavor coming from a joint of Hindenburg is generally pretty sweet with a bit of fuel on the back. In my Volcano, the flavor notes were much more distinctive, with the sweetness from the Helium full force on the front end and a gassy mouth-coating aftertaste.

I mentioned before that I didn’t especially enjoy the Bixcotti x GG x Oreoz that I got at the Spaceship meetup, but this fresh Hindenburg checked all the boxes. It brings excellent flavor and aroma together with exceptional potency, and a supremely relaxing effect. Doja truly hits with the 1-2 combo for this cut.