Finally!  An Initiative 71-compliant seed exchange has taken root in DC and folks now have a simple, straightforward way to obtain their cannabis garden-starters.  DCSeedExchange.com was established to share top-quality genetics with our District’s ganjapreneurs, patients, & enthusiasts with a strong emphasis on the growing market of CBD-rich strains, but you’ll find plenty of good ole’ fashioned Tetrahydrocannibinol if you’re a fan of the classics like yours truly.  The purchase of a tee shirt supports their mission of sharing seeds with veterans, people with disabilities, and caregivers.  DCSE features exclusive access to seeds from Full Spectrum Genetics, JD Short (that’s not a typo, it’s famed breeder DJ Short’s son), and Digital Genetics.  They also carry stock from Farmhouse Genetics, Kief Sweat, Jordan of the Islands, and Second Generation Genetics.

I wrangled up a meeting with the man with the plan, Paul N. Chucker.  No, I didn’t get it until he explained it to me, either.  You gotta sound it out.  And know a bit about the breeding process, and I was astonished at how much Paul did.  At a nearby bar, the Gentleman plied him with Stella Artois and bar nuts until he spilled the beans.

Where are you from, dude?

Arizona, originally.  I spent some time with the Peace Corps, so I got to travel to some interesting places.  Then I worked with journalists in Iraq.  But I’ve been a DC resident for the last fifteen years.

That’s heavy.  Ok, so how did you get into cannabis?

I started smoking in high school, like everyone else, I guess.  So I’ve been a fan of the plant for a long time, but it wasn’t until I saw how CBD helped my best friend reduce the seizures he experienced as a person with epilepsy that I really got involved in the growing aspect.  That, and seeing how it helped his father in his battle with cancer, convinced me to talk to some local growers.  They took me on as an apprentice.

How are your friend and his father now?

We are working with high CBD strains to prevent seizures and precursors, but still have a long way to go.  But his father’s cancer is in remission.

Wow.  Another “anecdotal” victory for a plant the government says has no medicinal value.  Don’t mind me, I’m just bitterly breaking the fourth wall.  Apprenticeship?

Right, so I helped the local guys with their grows and made a lot of friends.  Once I knew what I was doing, I got an offer to go down to California and work some operations there.  We had these massive, stealth indoor grow ops out of foreclosed houses in some of the nicest, gated communities in SoCal.  Nobody suspected.

Haha, that’s awesome!  So why did you start DCSeedExchange.com?

Well, when I returned home, and Initiative 71 passed, I couldn’t find any place to legally get seeds out here!  I’m a bean-hoarder.  It’s a problem.  I’ve got packs and packs of genetics I’m never going to actually grow at this point, but that interested me, or I got a good deal on.

What do you mean?  There’s seed shares all the time.  I just got some seeds from Phone Homie when I was on The Slab Hour a couple nights ago.

I attended some of the early seed shares.  After waiting in line for hours to receive a few unmarked seeds- and while that’s amazing from a historical perspective, something that should be celebrated- I knew there had to be a better way.  So I’m trying to build a cannabis seed exchange here in the District.

What’s your biggest challenge been?

Order minimums from the larger, distinguished breeders.  Some of these guys won’t give you wholesale pricing until you order at least 2,000 seeds. That’s too much for me to take on to start, but if enough DC growers use DCSeedExchange.com, then I’m certain we’ll be able to reach that level soon.  We have plenty of high quality genetics to get started now, though.

Terminator, probably.  I thought you said you weren’t going to get weird.

After an enjoyable evening of beer & buds, nerding out about our favorite strains together, Paul graciously gave me two six-packs of regular (i.e., not feminized) Platinum Blue Dream/Ken’s (Estes) Kush X Monster OG to give away free to some lucky subscriber to the Gentleman Toker’s Email Newsletter.

Sign up right here and you’ll be automatically entered into the contest!  Thank you, DC Seed Exchange!  FYI, if you can demonstrate a need for seeds, DCSE has a limited number available, many high in CBD, donated by generous breeders just for you!  Please note priority is given to those in need including veterans, persons with disabilities, and care providers. 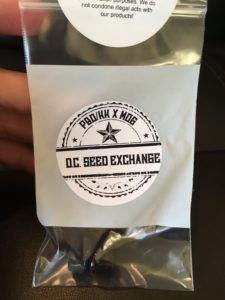