To celebrate Stoner Christmas 2: Electric Boogaloo AKA Oil Day, I figured we'd crack the hood on one of Maryland's newest medical marijuana processors, Prime Extracts. Concentrate is one of the fastest growing sectors of the legal cannabis market and my personal favorite. A hot blast of THC to the brain is just what the Gentleman requires to operate at peak capacity. If you're old school, you're probably familiar with hash. Concentrate is the same concept, but with more science. Butane hash oil, or BHO, set off the latest craze for super-potent cannabis, but there's lots of ways folks are trying to squeeze the gold sticky from that green icky these days, including propane (PHO), carbon dioxide (CO2), or just smashing the ever-lovin hell out of it (rosin). The resulting extract can take a number of different forms, from glass-like shatter to drippy honey oil and in between, budders, honeycombs, wax, nectars, saps, jellies, diamonds...mmmm. I'll be right back, y'all. Yeeeeah alright, let's do this. I found a couple packs of Prime Extracts' concentrate at Revolution Releaf in Laurel, some Sour Diesel Wax and Cherry Cream Pie Shatter. It was a little weird pulling into a weed store on a quiet stretch of Route 1 where I used to ride my bike as a kid. There used to be a strip club there, right about there, and I remember one time I was at the Roy Rogers getting ice cream, there was a car accident outside and a bunch of dancers ran out in costume. Sigh. Good times. I like to visit every so often and reminisce. I'll pull into the old apartment complex and walk around a bit. Look at the school where we used to steal fire extinguishers to set off in the woods. The old pool with the beehive we used to smack with these long metal poles the construction guys left lying around, then we'd run and try not to get stung. The window a girl pushed me out of in a panic when the parents returned home to the slumber party we'd crashed and I somehow turned 180 degrees before gravity kicked in, allowing me to catch the windowsill by my fingers after scraping up my forearms and drop gracefully to the ground. Rollin' twenties, baby! 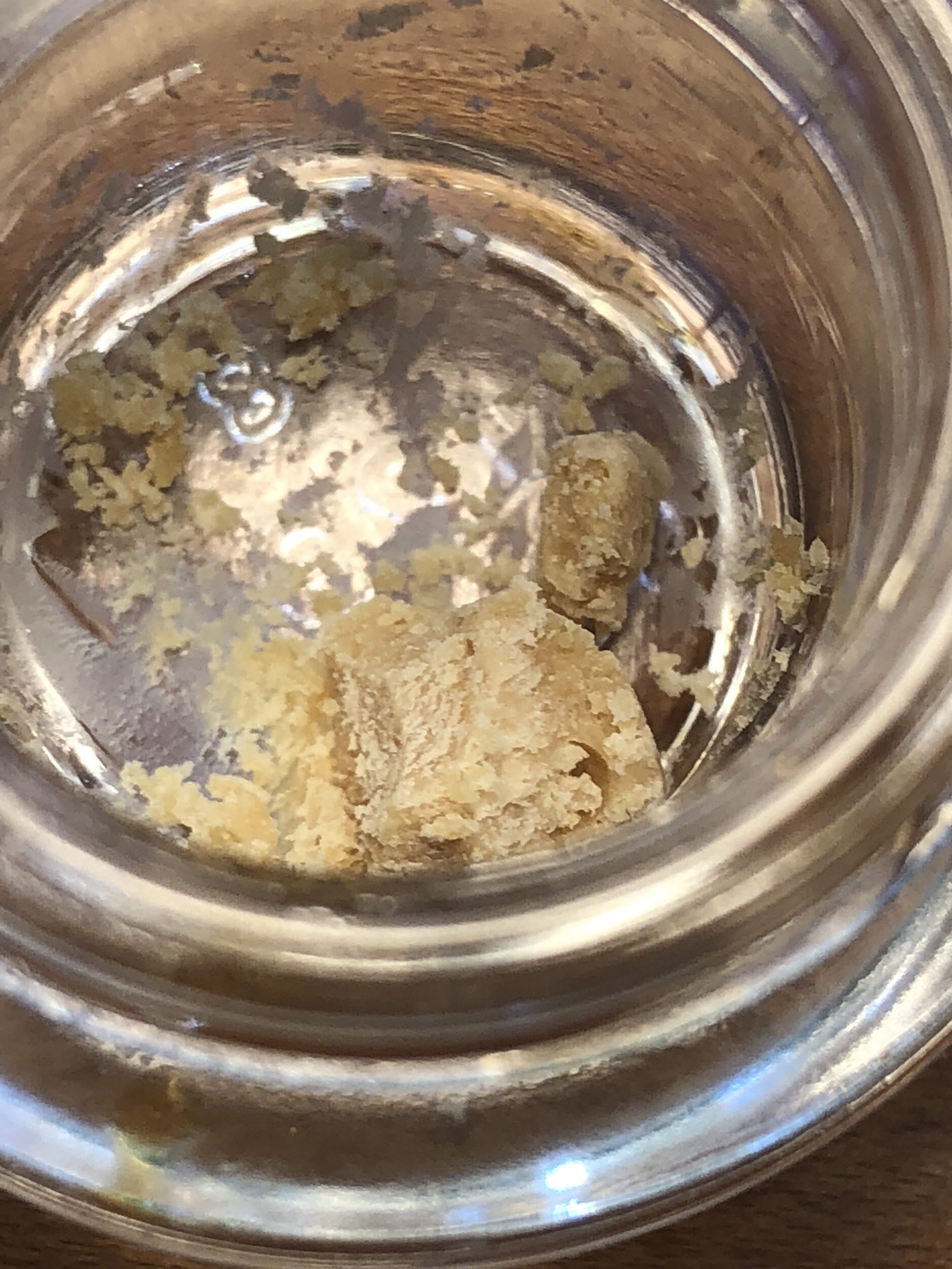 First up, Prime Extracts' Sour Diesel Wax. I'd have called it Honeycomb, the prettier name I found out West for Crumble, which sounds like Discworld troll drugs (shoutout to the two other Pratchett fans reading), but it's splitting hairs. You wanna call this wax, that's perfectly acceptable, as it's an opaque chunk of solid concentrate. It's got a tough consistency, like pool cue chalk. It was difficult to work my tool through the starting block without pieces splintering off, so you may want to hit the tool with a lighter first. Information on Prime Extracts' methodology is lacking online, but they were kind enough to respond via social media that both the wax and shatter were created using a food-grade ethanol extraction process. I've heard of ethanol extraction, but you don't find it around much- I believe I read somewhere it wasn't as efficient as other methods, which would explain that, so this is my first official review of ethanol-extracted concentrate. Oooh, neat! There's no smell to Prime's Sour Diesel Wax to speak of, but there is a surprisingly sweet flavor on the inhale. The potency is a little low, but that's true of most of the flowers available in Maryland's medical program to date, so not unexpected. It does provide a nice mental energy boost- my thoughts are moving along at a brisk, orderly pace, I can focus, I can work- but it doesn't quite get me where I need to be. Time for another dab. 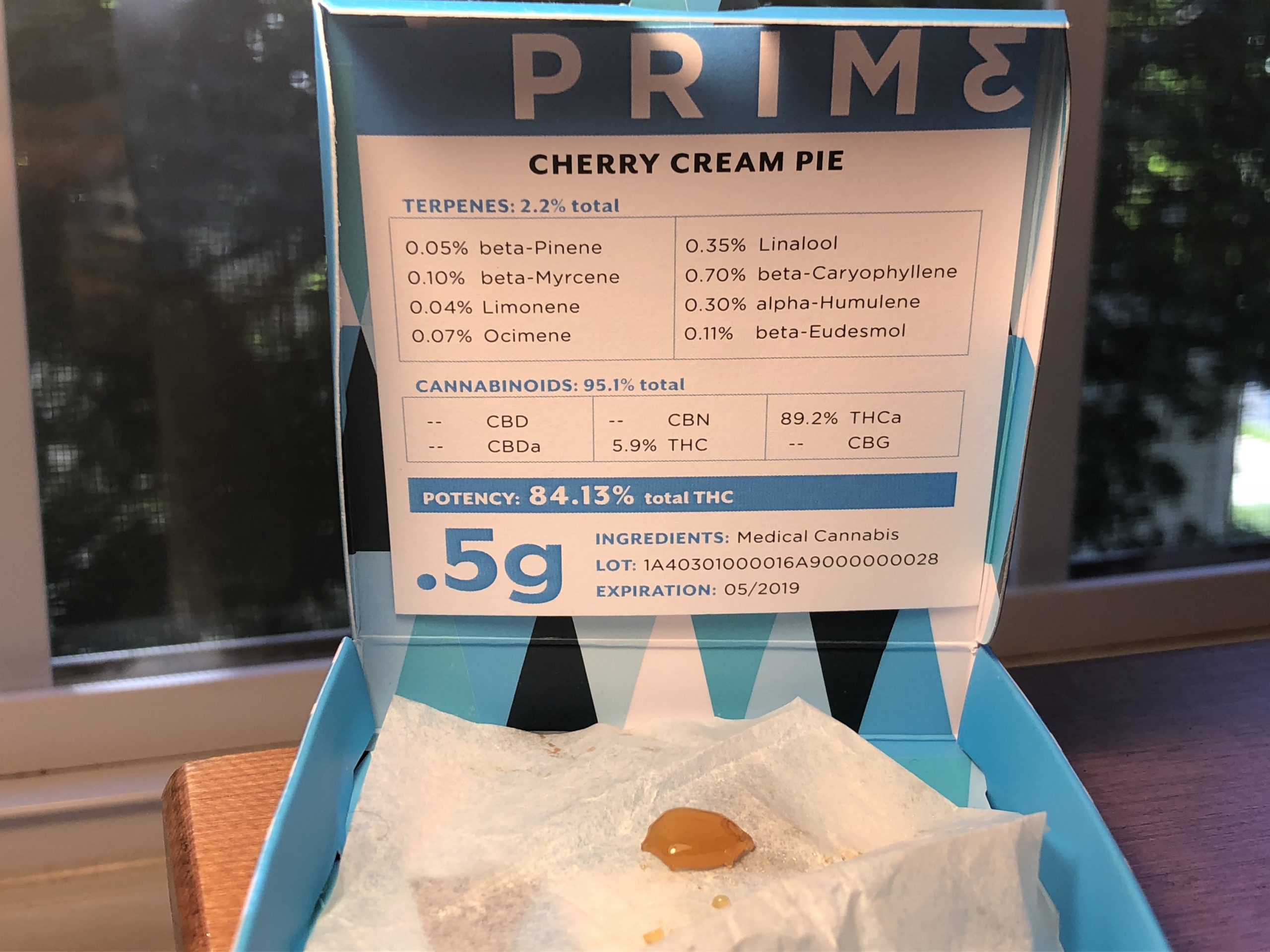 Prime Extracts' Cherry Cream Pie Shatter is the superior product, but they both cost the same, about $60 for a half-gram. For those of you playing along at home, that means a whole gram is $120. Yeesh. I can go through less than that in a week, which is a modest number for patients like me that rely on concentrate medicines, but I've complained about prices plenty already, let's move on. It's good shatter. It exhibits the beautiful golden/amber color and transparency that is the mark of quality, but looks can be deceiving. Again, there's no aroma to speak of- sometimes you get a little whiff of the terpenes in shatter, but not here (which goes back to the flowers again). It's got a full-bodied, woodsy flavor to it and the potency is significantly stronger. Great stuff, but I can't dab it while I'm trying to write. 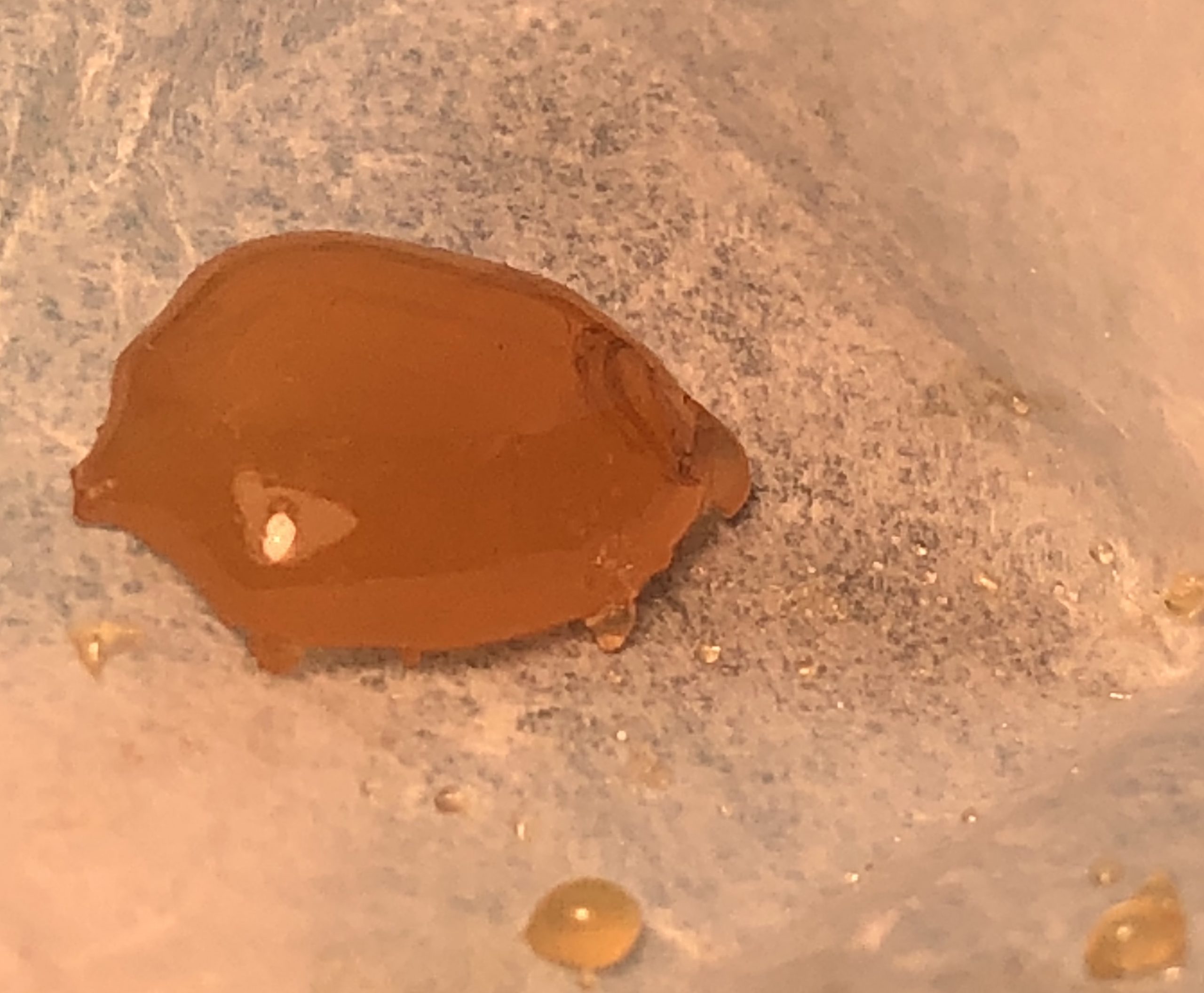 Prime Extracts' Cherry Cream Pie Shatter feels every bit the indica. My thoughts slow and my muscles relax, letting me melt into the couch to binge-watch fishing shows on Netflix. There's this other dude that copies literally every fish that Jeremy Wade goes for on River Monsters and I don't find him as charismatic, but there's a couple episodes where he fishes for big sharks and has to swab their mouths to collect samples for doctors treating bacterial infection in bite victims to study. It's called, uh, Chasing Monsters. Not super original, but those episodes are well worth watching, and fishing is fishing when I just want noise in the background while I scroll through Reddit. Speaking of, I GOT BANNED! ALL HAIL THANOS, BALANCE HAS BEEN ACHIEVED THROUGH OUR SACRIFICE! REJOICE!!! You...don't know what I'm talking about, do you? Here, I don't have the word count to explain it, it's a Reddit thing. 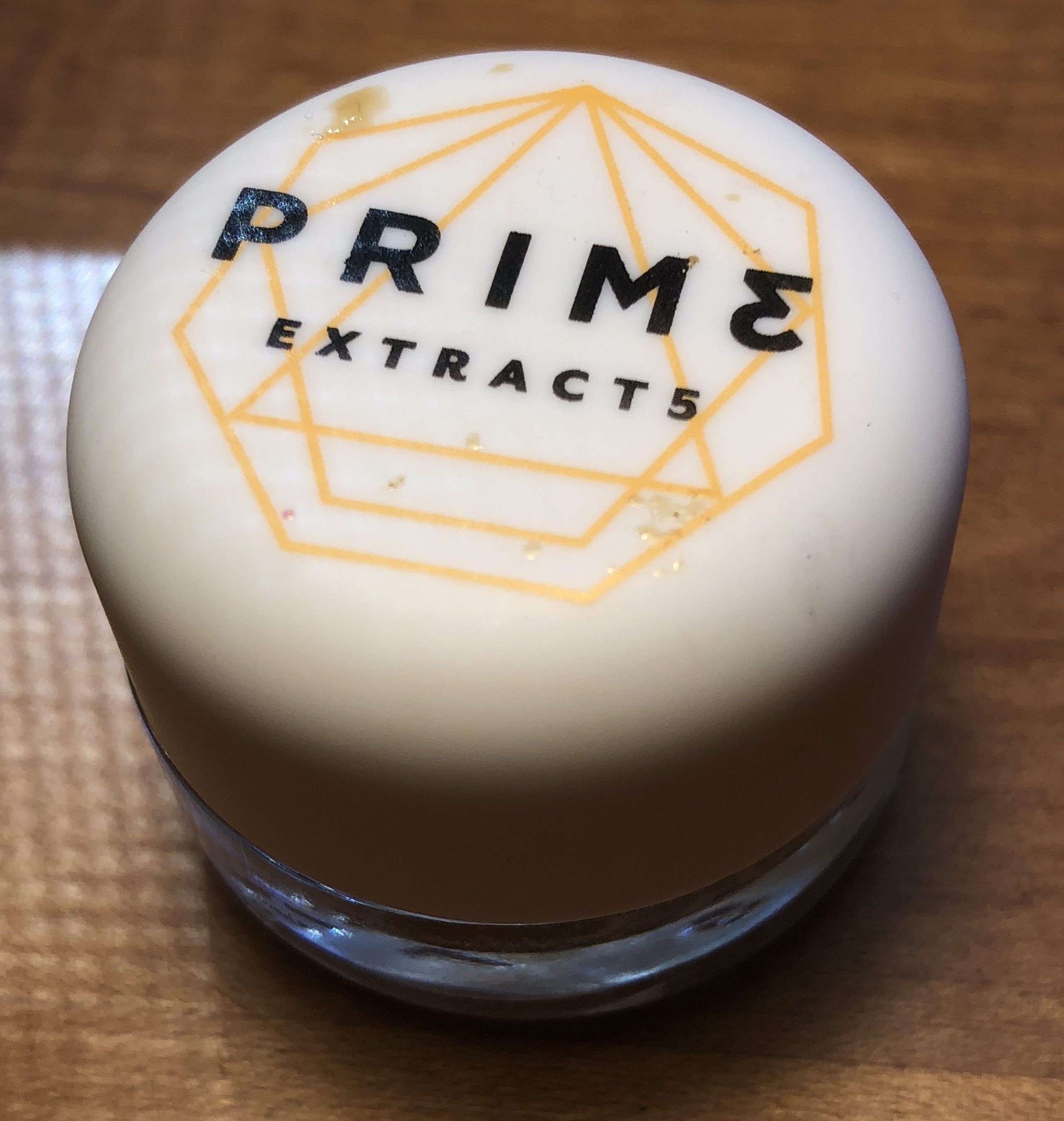 Anyhoo- Prime Extracts' Wax is okay but the Shatter is better, so for the same price, I'd go with that. Both are decent options for what's available in Maryland's medical program and as the flower quality continues to improve with stronger cannabinoid and terpene profiles, so will the concentrates available from Prime Extracts. I'll be keeping an eye on 'em, and wouldn't hesitate to try out one of their distillate vape cartridges based on what I've seen so far. If you want to get a medical card, my partners at Veriheal can help! And make sure you sign up for my newsletter for a chance to win this week's giveaway from DC TeaPad! Have a safe and happy 710, everybody!