Paranoia, as you wake drenched in sweat, sick to the deepest pit of your stomach in the middle of the night, the feeling that your telepathic twin has blood, innocent blood, on his hands lingering in your mind so much longer than any nightmare should…

The reckless bloodlust that fuels exhausted muscles to overcome broken bones, metamorphosing hands and feet into iron weapons of white-hot fury, as your rival cowardly betrays the wise and kind Sensei in his lust to usurp the font of eldritch power you were both sworn to protect…

The quiet ennui of a bleak, chained soul, garbed in a growing, gray sadness,  savagely gnawing away at its own extremities in a desperate bid for sweet, ever-elusive freedom…

Cannabis topicals, I’m afraid, will not help with any of the ho-hum, run-of-the-mill, everyday problems folks like you and me face.

But if you suffer from back pain, muscle pain, and so on, holy cow, you should really try some of this Medical Salve!  Seriously.  The good folks mentioned to me that it was good for the skin, too.  This one-hundred percent organic cannabis topical works.  I am honestly shocked how well and that’s why I think it’s important to tell y’all about it, because this medicine could do a lot of good.

You know how it is. You go to the drugstore and buy some ointment or cream that’s supposed to alleviate some pain and yeah, maybe, if you don’t think about it much, you can almost sorta might feel some relief, you think, for a few minutes.  Or you don’t bother, because you know that garbage doesn’t work and you could spend $13.99 on a sixer of craft brew, instead.  Maybe a bottle of CabSav if you’re feeling particularly saucy.

So it was the day after my physical therapy appointment, which meant I wasn’t due back until next week, when I dozed off binge-watching Supernatural on a Saturday night.  I woke up, my neck swiveled and hanging off my shoulder like a prize sturgeon strung up at the fish market.

“Aaargh,” I garbled at the unblinking, uncaring screen.

“Aaargh,” I repeated, for emphasis.  The left side was tight, sore, close to spasming.  I dealt with it for most of the day before I remembered the jar an Organic Collective had kindly gifted me more than a month before.  It was already sitting out at room temperature.

Wow.  After about five minutes of rubbing this tonic of infused coconut oil, shea butter, cocoa butter, and other triple-secret ingredients, the tension had dissipated, leaving only a slight ache.  Be sure to work the salve in until the sheen disappears, that’s when your skin has absorbed it.  The analgesic effects were long-lasting, too.  Slowly, that twinge ratcheted back up to pain, but I didn’t need another application until the next morning, which allowed me to move my neck freely to drive.  A slight improvement in the base level of pain meant the salve absolved every iota of anguish. 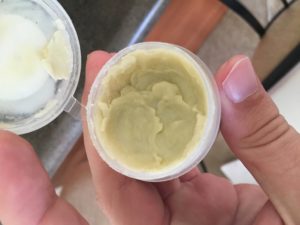 A few days later and your Gentleman was back to his wall-crawling, web-slinging self.  I think my Original Strength exercises, which I learned from the awesome folks at Got Your Back Total Health, by the way, help to reset the muscles and heal the occasional injuries I face as a cooped-up, cranky old coot, but there is wonderful synergy with this Medical Salve to relieve the pain, so I can work through the movements without struggle and get through the rest of my day.

I sound just like one of those ads that come on in the middle of the afternoon starring some brilliantly done up housewife with too much teeth. Y’all will have to forgive my enthusiasm over cannabis medicine that actually works after years of Stepford’s snake oil.  It’s simply unconscionable that this medicine remain illegal anywhere when it could do so much good for folks in physical pain.  It fills me with madness, rage, and unbearable heartbreak, which means it’s probably time to smoke a blunt with Fritz.

Speaking of!  It’s almost almost ALMOST Halloween weekend time!  You can start the weekend off right by hitting up District Cabaret at Buckeye+Bear for FREE tomorrow to see acts like comedienne Elizabeth Croydon, from these very e-pages, and rapper Davy Fresh (featuring  Malik the Drummer).  Did I say it’s free?  You should support local artists in the cannabis community!  I’m a local artist!  Support and I stop yelling!  What?!?  Yes, I am!  What do you call this blog, then!?!  Garbage!  You’re garbage!