In case you hadn’t noticed, cannabis cookin’ is all the craze in DC these days.  For sure, the requirement of a District of Health approved kitchen to produce edibles has proven too great an obstacle to this point for the medical program as a whole, and their absence has left a massive space in what has become a very profitable market in other canna-friendly states.  What I think we’re seeing here is more than market forces.  What started out as homemade cookies and brownies has quickly blossomed into a competition to produce the prettiest, most unique treats, the finger-lickin’est comfort food, and marvelously-plated gourmet infusions.  I see a city caught in a culinary Renaissance, a thousand spatulas spinning joyfully, their inspiration borne from reconnecting with this ancestral plant in such a vital and visceral way.

I’m a little sketchy on how spatulas work, apparently, and so, quite happy to masticate someone else’s little masterpiece into delicious oblivion.  Let me suggest, when deciding where to get your star-eyed sticky buns and such, that you’re off to a good start if you like their flowers, too.  I’ve been following these guys on Instagram and drooling for my chance to try some of those sparkly emeralds myself.  We ran into each other at the second Green Light Festival Fundraiser and I tried, but failed, not to geek out fanboy-style when they acquiesced to giving me two brownies to review.

First up is the Triple-Chocolate Brownie.  They handed me this massive, dark chocolate chunk made with their gorgeous, wildly popular Dr Who flowers and pointed out the 150mg listed on the package as a warning, probably because I was a little smacked from edibles, dabs, and public speaking on an empty stomach.  Under normal circumstances, however, my tolerance for ingested ganja is lamentably high, so the heavy dosage held instant appeal.

I’m one of those folks that thinks there’s such a thing as too much chocolate (gasp!), but the cream cheese icing provided an excellent balance to the thick, just-like-Mom-makes flavor and I really enjoyed it.  The brownie was dense but still soft and crumbly when I pulled it out of the cabinet to eat the next weekend.

45 minutes later, the medicine began to take hold.  For about thirty minutes, I felt a light mental stimulation, a bright little buzz that had me considering whether I ought to try to get some work done.  Around a quarter past the hour, though, I had clearly made the right decision to strap into my armchair and watch sitcoms instead.  At the height of its potency, this brownie was intensely psychedelic (which I expected given this it’s parentage from Timewreck). I let go the rein of my thoughts and let the universal River flow into that space with an overwhelming sense of calm and well-being.  Everything was OK and I was right where I was supposed to be.  Everything was happening right on-schedule.  Relax and enjoy the tiny, foul-mouthed talking bear on the television.

Yeah, ish got Meta for a minute is what I’m saying, but in a very good way. 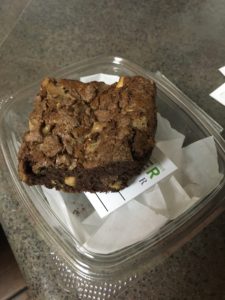 The Heath and Reese’s Brownie was just as tasty as the Triple-Chocolate with the same homemade consistency, but this one was made from Grape Kush.  I am really excited about the availability of strain-specific edibles and hope the industry keeps moving in this direction!  I wasn’t sure what to expect from the 80mg dosage for me but I felt a chill, heady high that came on quickly (around 30 minutes) and kept me sufficiently medicated for about 90 minutes.  The psychedelic effects make it difficult to focus, so I would recommend you wait for the PM on this one, too.

And I definitely do recommend these delightfully potent, made-from-scratch (except for the Reese’s chips, natch) edibles!  As I’ve mentioned before, you need to take the time to learn your tolerance, but if you can handle it, the Triple-Chocolate Dr Who Brownie is a helluva way to spend a night tearing through your Netflix queue.  If you’re planning a night out with friends instead because you have, like, a life or whatever, unlike some weird internet bloggers we know, then the Heath & Reese’s Grape Kush Brownie won’t let you down.

And I did a thing yesterday, I’ll have you know, and it was awesome.  Better than your thing.

Not as awesome as meeting so many other cannabis enthusiasts, advocates, and business folks at the BUD Summit on Saturday!  Special shoutout to my team that helped me hold the table down on short notice, thank you guys so freaking much, and hello to all you new folks!  Kick your shoes off, set a spell…we’re gonna get weird with it.