Ballpark Holistic Dispensary pitches recreational cannabis just a few blocks from Mile High Stadium but when the Gentleman stopped by and gave the signal he was ready for that heater, the live resin from Cannabis Maximus I picked up there turned out to be a high, hanging curve I intend to smash into yon bleachers. At $80/gram and reeking of ammonia, this product easily represents the worst value I found as I cruised downtown Denver. I really wish I had given their “high-potency, high-terpene” full spectrum extract a sniff first, but c’est la vie, no? NO! I’m gonna yell about it on the internet, baby!

OK, first of all, though, Comey. What? I don’t operate on a 24 hours news cycle, amigo. Just cuz something happened over a week ago and new stuff has happened since doesn’t mean we should forget what just happened! That’s an old Jedi Mind Trick, my blue-skinned, gill-necked padawan. Plus, this dude is my new hero. I can’t believe he flat out called the sitting President an untrustworthy, lying sack of flaming troll shit (paraphrasing, of course) in front of Congress. I want this hombre’s autograph. Swoon! And I am damn sick of Paul Ryan coming out to defend Trump by saying ‘uh, he’s new at this.’ Dude. As we all learned in the last episode of Seinfeld, ignorance of the law is not an excuse. And this fat angry hamster is the President! HE DOES NOT GET SLACK AT THIS LEVEL, BRO.

I could go on – you know I could- but let’s do the review now, shall we?

Right, so, Ballpark Holistic Dispensary. The lobby is nice, bright, and even though I arrived just behind a group of four, I was immediately granted access to the interior store after a friendly young woman checked my ID. Then I had about a ten minute wait for the next budtender and while they have considerately placed a couch in the room for their guests, it’s inconveniently located right at the front of the line. So you either have to get out of line to sit in it (I wasn’t given a number of anything), or you don’t sit in it until you are next to be called. They should re-think that. The decor inside has a very industrial feel to it, with red lockers and trays of cannabis products stacked in utility refrigerators behind the counters, but considering their name and location, I’d have thought they’d push the sports angle harder, with memorabilia along the walls and, like, a cardboard cutout of Andres Gallaraga smoking a blunt or whatever. An opportunity missed. The lights are heavily dimmed in the back room, making it hard to see the buds. Overall, I felt the same about their flowers as most in Denver, but I did find some Black Jack that smelled OK, a little piney as it should, which I picked up for a reasonable $15 gram. 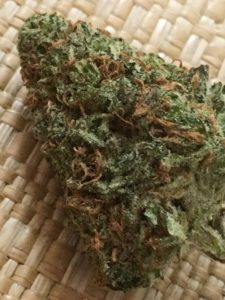 While they didn’t have a huge selection, they had a nice range of pricing in their concentrates and I hadn’t slurged on much too boojey at this point in my trip, so when my pleasant budtender pointed out their top of the line, high-potency, high-terpene Cannabis Maximus’ Full Spectrum Extract (live resin), I giggled with glee and gave her money. Ghost Train Haze has been on my list of strains to try for a while now and I was super excited to give it a go. When I opened the glass jar inside the pop top, I was expecting heaven, the crown jewel of my shopping. I had reason to, since at $80/gram, it was the most expensive thing I had purchased. And this was Denver! If I spent $80 on a gram of concentrate, it’d have to be awesome, right? 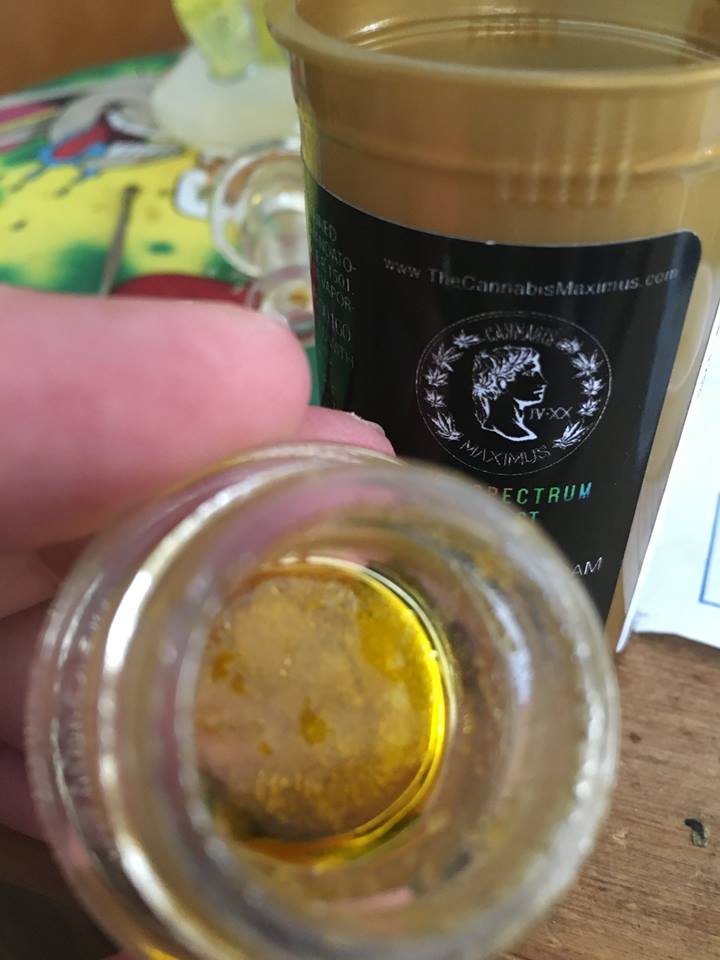 Umm…believe it or not, the jar is half full in this shot.

Cannabis Maximus’ live resin was super lame. It was half sauce and half sugared up. I’d have been happy with either/or but the lack of consistency was a mark against. Then I took a whiff and that’s when I got super fucking mad. Their Ghost Train Haze positively reeked of ammonia. Okay, there was a slight citrus hint, too, I actually found some concentrate that smells even worse of ammonia I’m gonna tell y’all about soon. If Cannabis Maximus’ product had cost $40, I’d not be so upset. It still wouldn’t be good, but I can’t BELIEVE they are charging folks $80/gram for this crap at Ballpark Dispensary.

I couldn’t believe I had wasted my money on it so I smoked most of it any damn way, which I don’t recommend you do. If it doesn’t smell good, don’t smoke it! Your Nose Knows. But I’m a human guinea pig, apparently, and I didn’t want to write a review without giving it a shot. Medically, it certainly improved my mood and gave me a burst of mental energy, but did little for anxiety- about what I’d expect from a plant that leans heavily towards the sativa end of the spectrum. I didn’t feel like I could focus well, but whether that was due to the strain or to the poorly grown flowers it was squished out of, I can’t say.

Even at $40/gram, I wouldn’t recommend Cannabis Maximus’ Full Spectrum Extract- I just wouldn’t be so fucking mad about it. 80 goddamn dollars for this shit?!? Bro, I get stuff in DC every fucking day that smells divine for less than that. This was nearly unsmokeable. Ballpark Holistic Dispensary was decidedly average among the weed shops I visited in downtown Denver and brought down significantly by their price for this concentrate I hate, but they’ve got great potential there and a nice crew of folks working there. You can do better during your visit- we’ll get to some reviews of stuff I liked out there in the next one!