Beautiful Palm Springs, California recently played host to what has become one of the hottest B2B shows in the cannabis industry, Hall of Flowers! Your Gentleman was only too delighted to accept an invitation to this tightly-restricted, industry-only event. See, at Hall of Flowers, licensed weed brands looking to put their products in the hands of retail buyers & decision-makers will give away samples either for free or damn near! I thought perhaps I’d finally gone mad when I heard what it was going to cost for two eighths at the first booth I stopped at. “You said $399?”

“No, $3.99,” she laughed. I laughed. We all laughed. A quarter of weed for the cost of a king-size candy bar? What a wonderful trip this was going to be.

Over the course of two days, I got to meet small farmers, retail cultivators, large & newly-launched edible brands, distributors, dispensaries, and anything & everything cannabis in between. What I figured I’d do with this article is pretend I’m a dispensary’s buyer and tell you which brands I’d be stocking our hypothetical shelves with. With that in mind, here are the Hall of Flowers brands that most impressed the Gentleman. Drop the shades and roll the theme song, baby! Yeeeeah! 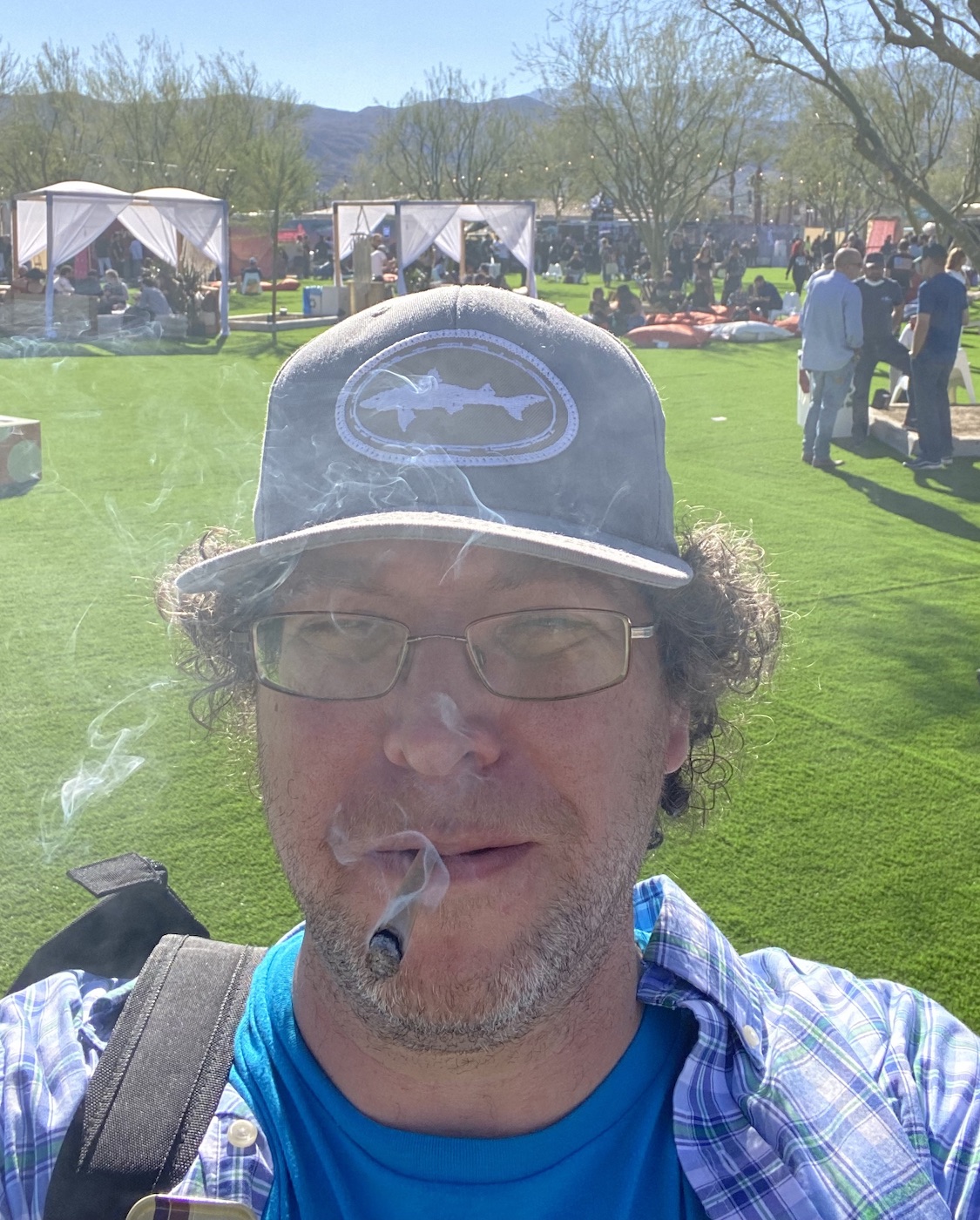 You’re probably familiar with the funky glassware from Jerome Baker Designs already. One of the biggest names in glass, Jerome Baker has produced custom pieces for the likes of Snoop, Dave Matthews, and Carlos Santana, and their collection of dab rigs shaped like robots and aliens can be found in head shops all across the DMV. What I didn’t know is that they have stepped into the flower game and are growing some fantastic cannabis out in Southern Humboldt County. 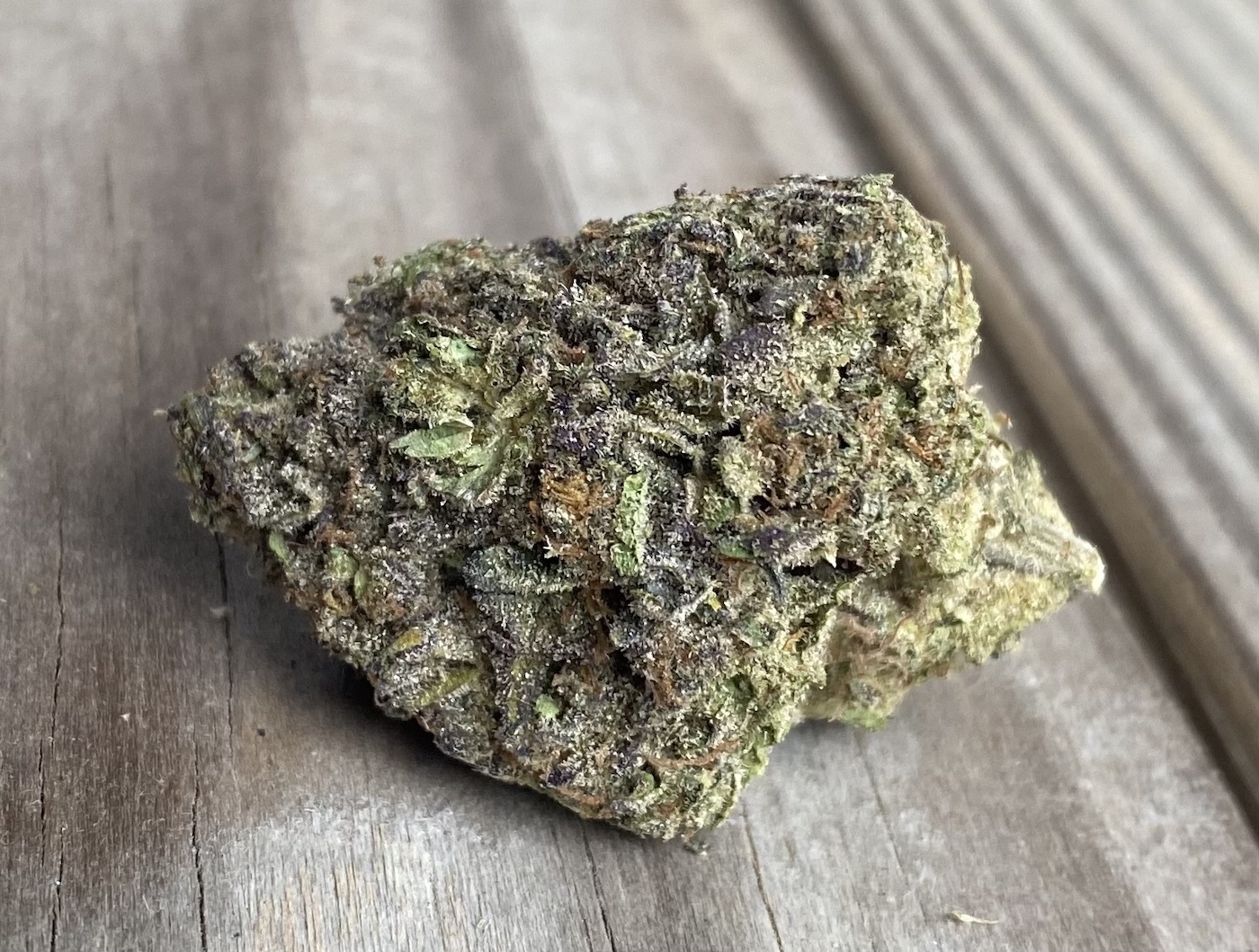 I made the acquaintance of JBD’s founder, Jason Harris, on a smoke break outside of Hall of Flowers main exhibitor hall. I mentioned I write reviews and he ushered me to his table inside, then put a fat bag of Baker’s Cake flower in my hand, JBD’s cut of the popular Ice Cream Cake strain.

Baker’s Cake aroma impressed itself upon my nose-brain as soon as I opened the bag. Delectably sweet, creamy, with an undercurrent of gas, the Gentleman was swooning before I’d even rolled it up! Happy to report, it smokes just as smooth and flavorful as one could hope.

I’ve put Baker’s Cake thoroughly through its paces and come to the conclusion that this weed is best saved for the evening. It won’t put you to sleep, but it induces such an intensely relaxing and happy high that any attempts to marshal my thoughts were entirely ineffective, so I giggled my way through the new Suicide Squad instead.

Ciencia Labs was founded in 2019 by Carolina Vazquez-Mitchell, former Chief Scientist and R&D Director for the popular Kushy Punch brand. Ciencia Labs currently has two product lines. The first, LUCHADOR, is a tribute to Vazquez-Mitchell’s Mexican roots, offering THC gummies and tinctures in an array of exotic flavors like Cucumber Chili Lime, Horchata, and Pineapple-Habanero. The Pineapple Mango gummy I tried was a rich, but not overpowering balance of both flavors and had no residual cannabis taste. I only ate three 10mg gummies instead of the usual 50mg dose I go for just to see if I could feel it, and I definitely did. About forty-five minutes later, all thought slowed, and I was able to catch up on some needed sleep. 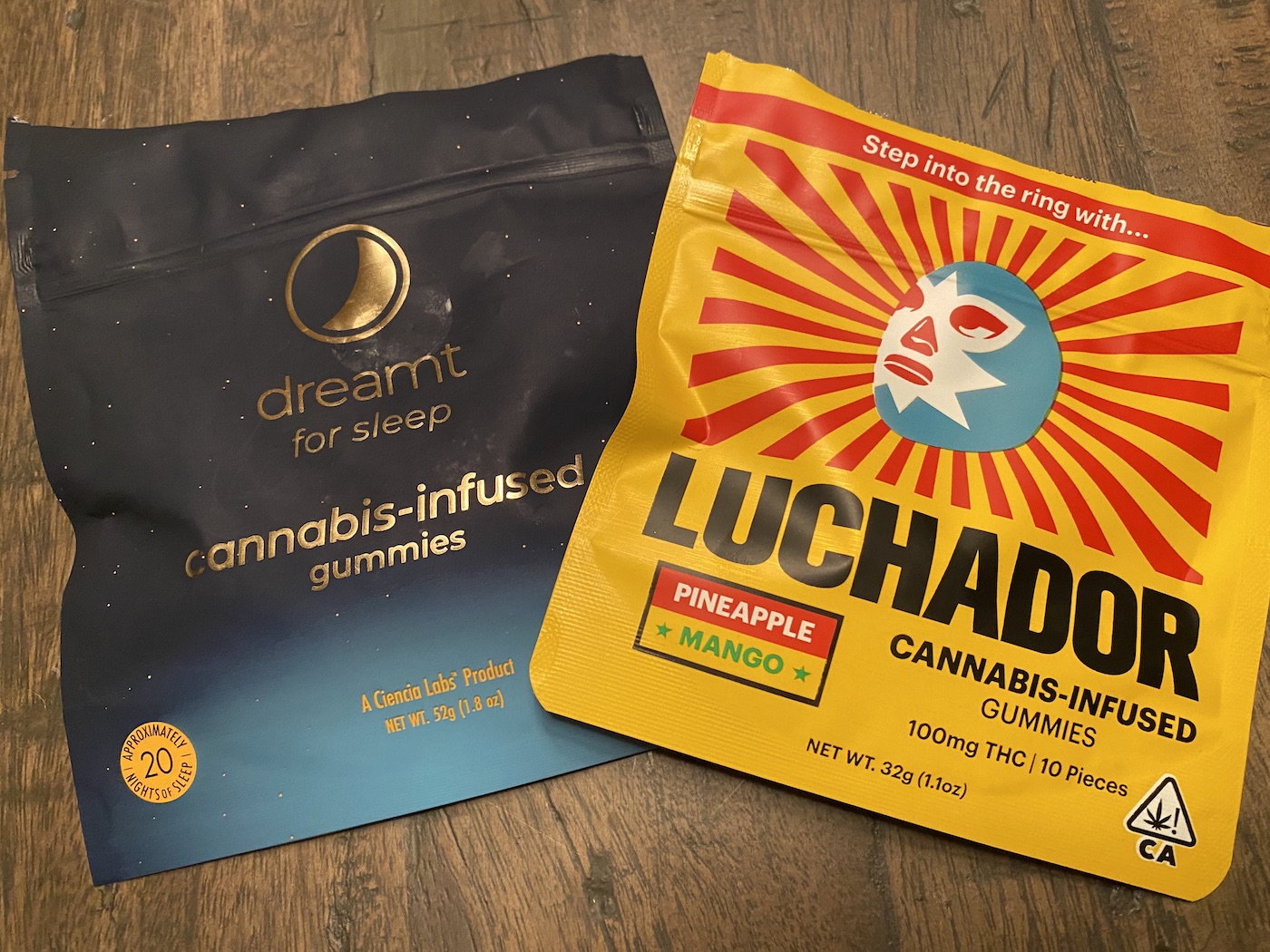 Speaking of! As interesting as LUCHADOR is, it’s Ciencia’s Dreamt line that’s captured my attention. One of the well-known side effects of cannabis use is that REM sleep is suppressed. It’s why you don’t always dream when you fall asleep after smoking. Daily smokers are probably familiar with the REM rebound effect, which can result in truly intense dreams when you skip a sesh or two. For me, this often results in waking in a highly emotional, agitated state, my mind still caught between dreams and reality. Can we throw some air quotes on that? “Reality.” There, that’s better.

Ciencia Labs Dreamt edibles and tinctures are low-dose THC (4mg), a matching dose of CBD, plus melatonin, L-theanine, and valerian root to correct this side-effect and produce REM sleep. This is the sorta thing that could really catch on! I’ve only tried it once, but I had been smoking flowers all day and again after I took my Dreamt gummy. I gotta say, I woke up surprisingly well-rested. The Gentleman would be only too glad to volunteer for a more extensive trial!

I picked up an eighth of The Cure Company’s Sweet Thang, a cross of Cherry Pie and Do-si-dos, at their booth and am thoroughly impressed. Sweet Thang has a rich, spicy aroma that cuts through the air like an anime samurai and a similarly lush flavor– I am dying to see the terpene profile on this one but haven’t found it online or on the package, alas. 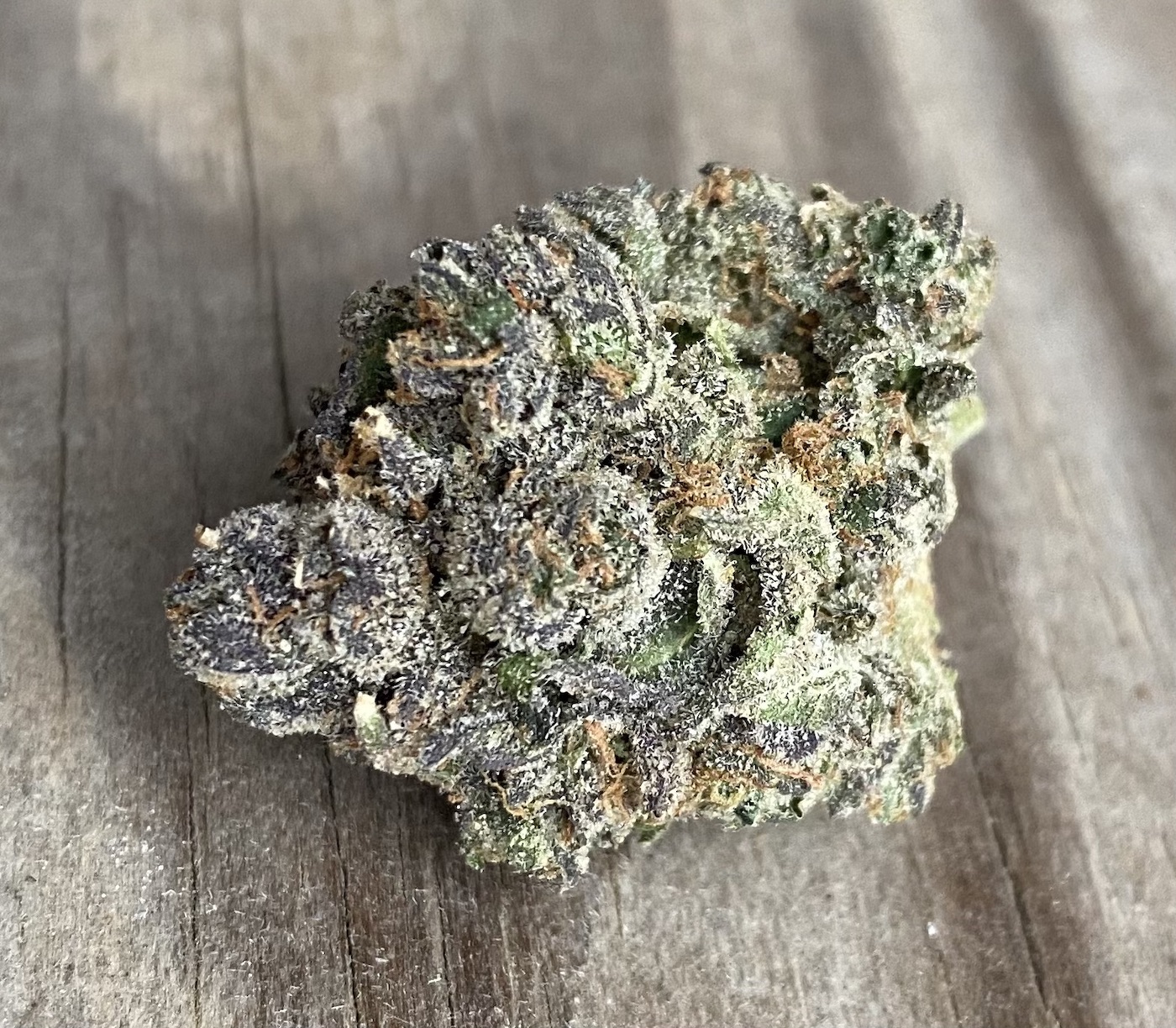 Sweet Thang is an energetic, productive strain that provides instant mental focus and turns my brain into the kind of machine that deserves a quiet, stark-white commercial set while some old dude in a sweater asks pointed questions and rolls marbles across its hood. Wait, what now? If I were only on the West Coast, this flower would be my go-to sativa.

The Cure Company operates a full seed-to-sale operation in Downtown LA’s Arts District, with an eight room indoor grow operation on the top floor and a dispensary, City Compassionate Caregivers, on the bottom. Hot damn, I know where I’m going to visit next time I’m in LA!

Clarified caught the Gentleman’s eye with a sign that said their edibles contained no distillate. If you’ve been following my rantings over the last couple months, you probably picked up on my newest pet talking point, namely, that I’d like to see flower-based edibles return to the market. To put my money where my mouth is, getting a sample from a cannabis brand that shares my perspective like Clarified, whose products adorn dispensary shelves up and down the California coast, was an absolute necessity. 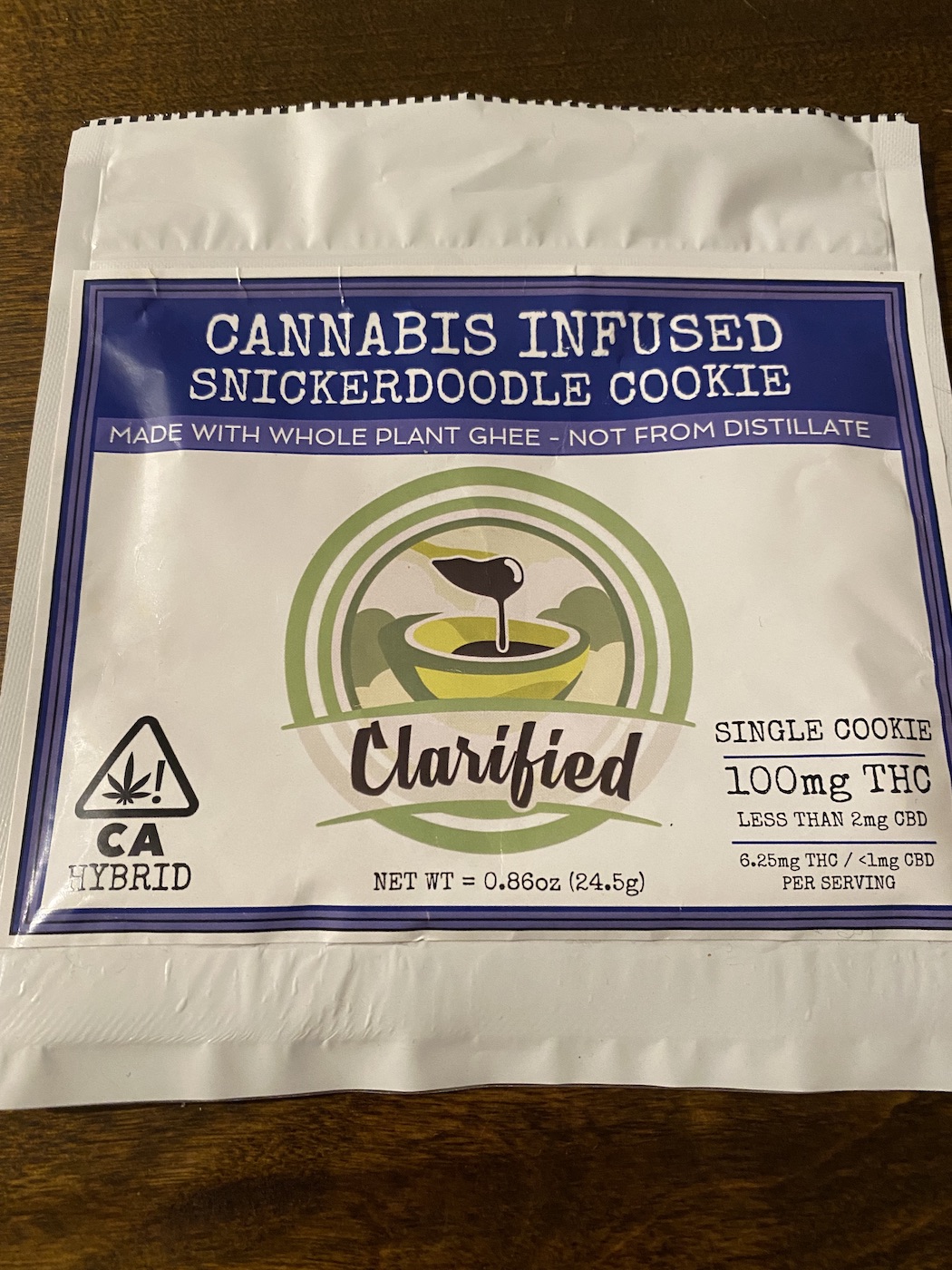 I chose a 100mg Snickerdoodle cookie, cuz they’re delicious and fun to say. Who’s my wittle Snickerdoodle? See? Clarified makes capsules, tinctures, and topicals too, all using whole plant extraction, so you get the full spectrum of cannabis compounds as Jah intended. They also sell the ghee butter they use to make their cookies, which you can use in baking or eat by itself. I assume you’d put it on toast, but it’s none of my business if you wanna go ham on a whole stick of butter. You do you, boo.

I ate just under half a cookie after a meal, smoked, minimal effect (say 40-45mg worth). That’s ok, daily smokers should aim for a higher dosage than they would with distillate-based edibles, but I still approach any new edibles with caution. Next time, a couple days later, I ate the rest in-between meals when my stomach wasn’t full, smoked, and ended up in remarkably high spirits that lasted several hours and past the Gentleman’s supper.

The fanciest terpene profile I found at Hall of Flowers was certainly the Caramel Apple flowers I picked up from A Golden State, which smell unmistakably like their namesake. Indeed, All the samples in their case were aesthetically stunning– vibrant hues, plump buds, and thick coats of trichomes abound. How did they achieve such a feat? It starts with AGS’ proprietary genetics (if I grew weed this good, I probably wouldn’t share the recipe, either. Greedy hobbitses can’t have Precious!) AGS then plants them in natural soil derived from coconut hulls and waters them with snowmelt from Mount Shasta in the Cascade Mountains. At that point, I assume, they’re nourished directly from the roots of Yggdrasil, the World Tree, and harvested under the watchful eye of forest nymphs on a full moon. 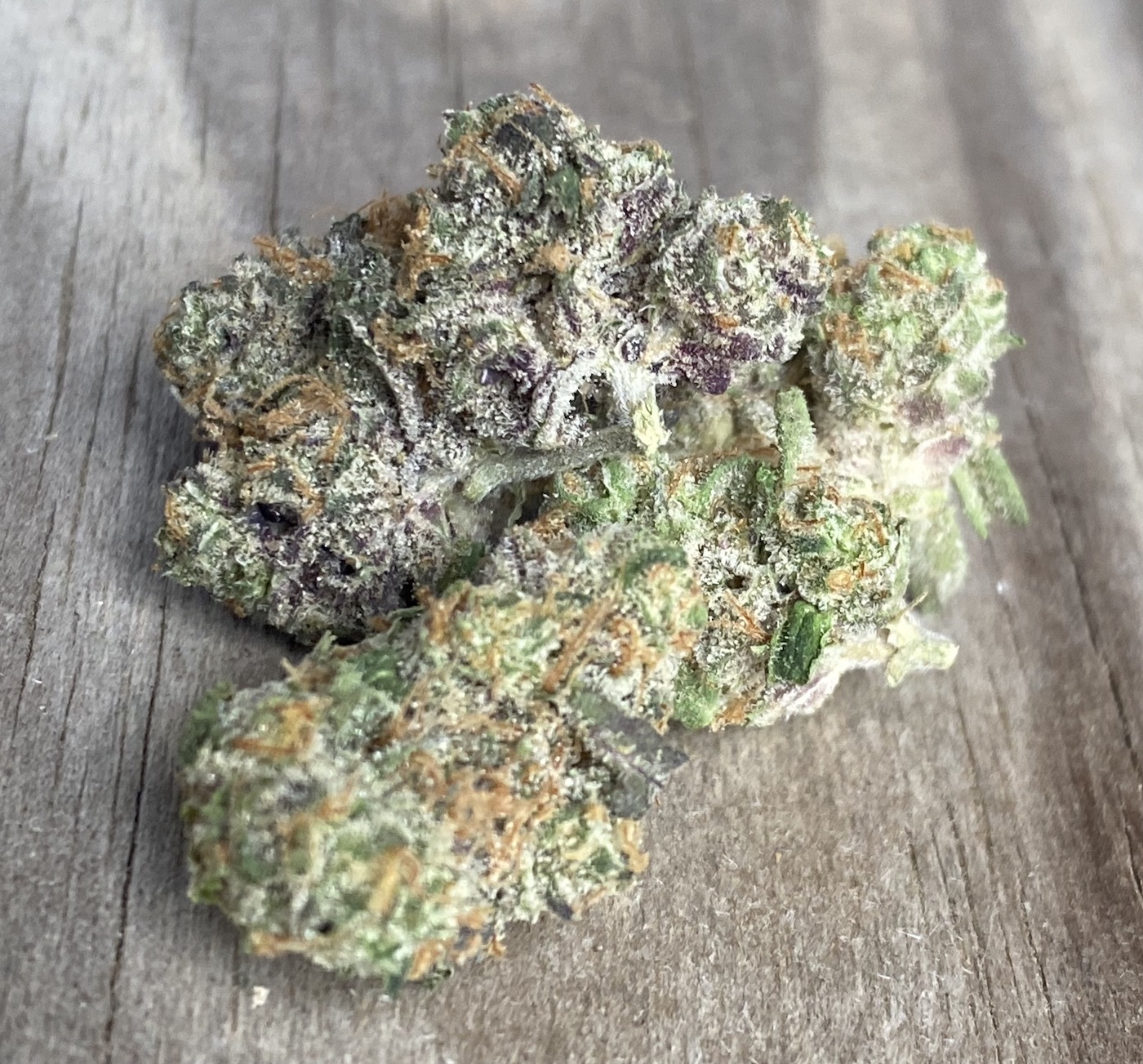 A rare quest item for any budding hero, A Golden State’s Caramel Apple flowers effects lean heavily towards the indica end of the scale, not enough for an instant KO, but consider yourself couch-locked and zoned out for a couple hours before the bed beckons. No worries, I wanted to play the new Guardians of the Galaxy game anyway.

With all the excitement of Hall of Flowers, I spent too much time on my feet and not enough lounging in the ample seating provided. By the end of the first day, my back was an absolute wreck. I hobbled my way across the street from the venue to an open massage studio, but bless him, the guy tried to fix my back all in one go and hyper-extended the muscles between my shoulder blades. I left in much better shape, but a softball of very sore, inflamed tissue remained. My next stop was The Vault dispensary & lounge in the same shopping center to find a full-spectrum topical solution. I’ve had good results with CBD-only salves, but it was time to break out the big guns. 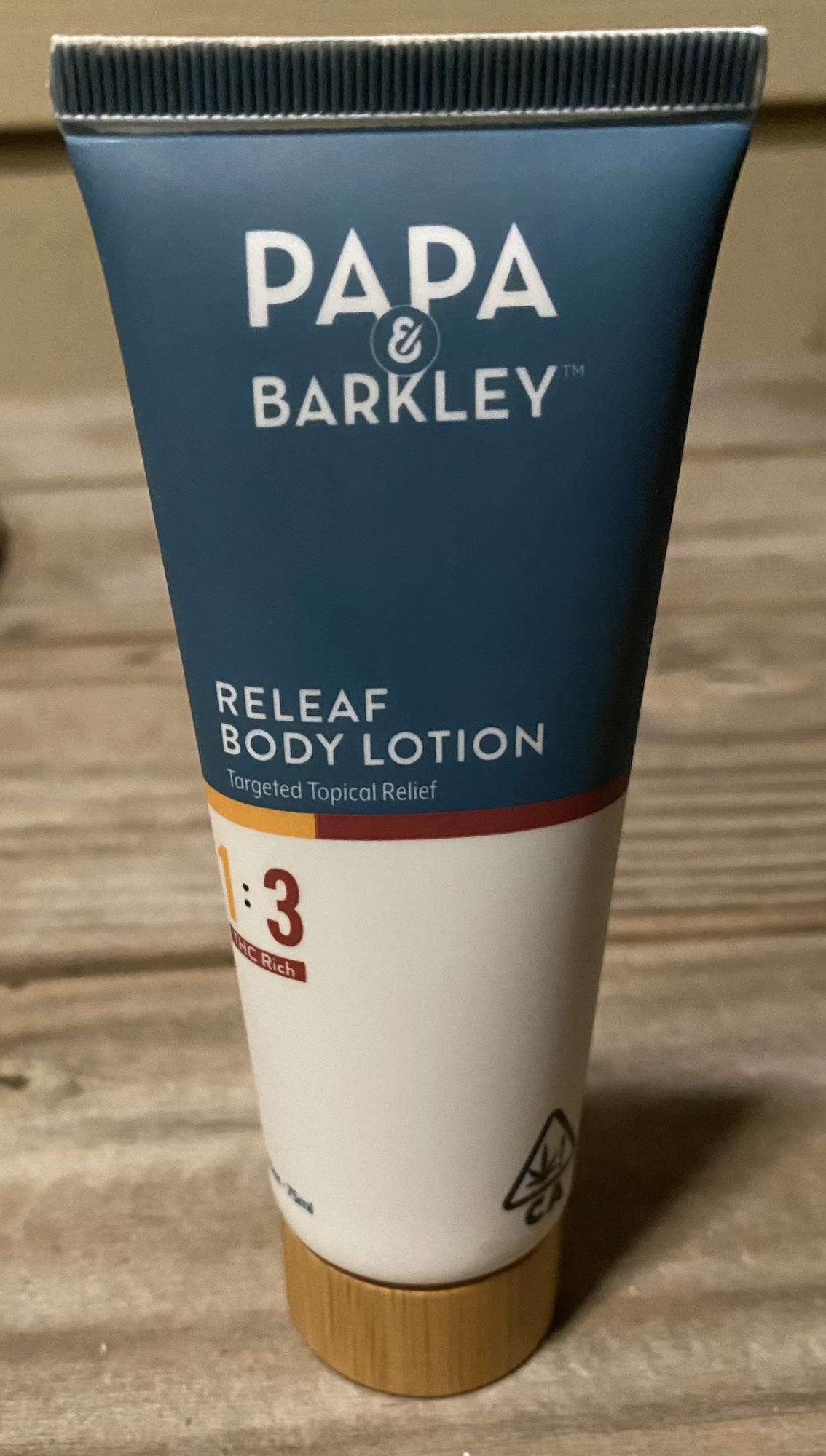 I settled on a tube of Papa & Barkley’s 1:3 (THC-dominant) full-spectrum ReLeaf Body Lotion. Their product lines include tinctures, patches, balms, capsules, edibles, and more in a range of CBD and THC formulas. These folks take pain relief seriously and it shows. Starting with sungrown cannabis sourced from California’s famed Emerald Triangle, Papa & Barkley soaks these flowers in their base oil to produce a whole-plant, solventless, full-spectrum extract– the time-honored tech of tinctures.

Five minutes after I slapped dollops of Papa & Barkley’s lotion on my shoulders and neck, the pain abated significantly. A couple hours later, and I only noticed it when I was paying specific attention to it. Two more doses over the next 24 hours, and your Gentleman was right as the rain that falls mainly on the plains of Spain, Zane. If I was on the West Coast, I’d buy this stuff by the tub and Scrooge McDuck my way through it every morning. Word is they make some amazing concentrates, too, if that’s what sets your mustache twirling.