Have you ever heard a grown man scream? Not in anger or pain, but fear, true pants-wetting terror that in a moment cuts through jaded cynicism like a hot butter knife, a drill right through all a soul’s calluses to find the frightened child hiding so quickly at hand it’s like he’s never changed, not really, the years between serving only to season his infantile nightmares in fat and guilt and shame. The instant disorientation as control of his fate is stripped away?  The despair as he instantly remembers his sins and knows that retribution is suddenly, sickeningly at hand?

High above Gotham’s spires, I welcome their guttural, pathetic howls with a grim joy. I enjoy the sound of the safe cracking and all those glittering, dark truths spilling out. Men build tolerance to pain, but not to being dangled out a thirty-story window by their ankle by a cowled, caped crusader.

“Tell me what The Big is,” I growl.  The night is black as tar and the moon hides its face.  It’s just me and Henchman Number Four.

“My name is Doug Pederson!” he wails. Dammit.  I’m monologuing out loud again.

“No one cares what your stupid name is, Doug!  That’s why I called you Henchman Number Four!” I scream down at his face, my grip tightening as he involuntarily thrashed like a hooked bass. “Now! What is The Big?!?“

“Uh, uh, uh, a c-c-cross between the uh, legendary G13 and Butterscotch Hawaiian! From B.C. Bud Depot, who says they travelled to Israel to secure these genetics. It’s a real heavy yielder!” HNF volunteers.

“Thanks,” I rasp, “You’ve been a ‘Big’ help.” He panics as realizes the use of a pun means our conversation is over and I’m going to drop him.  He screams again, briefly, as he falls…into the open cockpit of the Amazon’s invisible jet I’m borrowing because that’s a thing somehow, and faints.

On to Adams Morgan. Previous investigation found Initiative 71 compliant grow cannabis grow consultant Funky Farmacy primarily hung out at the Funky Piece head shop.  I arrived to find the door unlocked and tensed up immediately. They were expecting me. It must be a trap.

“Funky Farmacist!” I exclaimed with a flourish of my cape, “I’m here for The Big!”

“Oh, ok, cool,” he said, handing me a bag. “We really like this one. Just finished curing. Looking forward to your review, man.” 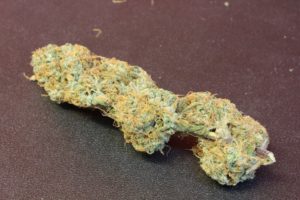 I stared, jaw slack in astonishment. “You’re just gonna hand it over? I didn’t need to assault all those people first?”

“Yeah. No,” he said, turning his attention to a customer. “Wait, what?” But the Gentleman was already gone, an open door wafting in the night’s gentle breeze.

The perfect time, incidentally, for this indica-leaning strain. The light green buds covered in crystals and bright orange hairs have an appealing, tropical look, the trim and cure are excellent, but its that strong, sweetly sour Skunk smell that really gets your attention. The taste is pleasant, not harsh, but the smoke is expansive and I coughed my way through a joint before smoking the rest in my spoon pipes.

Primarily, I found The Big delivered an anxiety-crushing psychic wall and a relaxed, elevated mood. Cognition isn’t totally impaired, I was able to get some writing done, but I felt too slow mentally to use it as daytime or social medicine. Definitely was more interested in visual stimulation than music, so queue up some old Dark Knight cartoons and chill.

Or holy smokes, Batman, have you watched the first episode of the first season of the most recent Twilight Zone-esque show called Black Mirror? I’ve watched a few more, all very interesting near-future sci-fi What If? type of premises each episode, but that first one…to describe it as a wild, poignant look at the rising power of social media to influence government does not do it justice, but I really don’t want to spoil it for you. Just bring the brain bleach. No, the big bottle. The biggest one.

Anyway, this indica will help you get some good rest, or a good, slow workout. I didn’t feel pumped like Master Kush smoking this right before physical therapy but I didn’t feel drained, either, and the zen enabled me to calmly push forward. I liked it a lot. Stop by the Funky Piece head shop in Adams Morgan if you’re interested in talking with them about consulting on your home cannabis grow. Or hit up the Gentleman if you’re interested in taking a ride on my invisible jet plane. Silver Age, baby!