(Alternative Solutions gave me some of the sweet, new Goji OG and Blue Cheese bud rosin to try and if you're a boring person whose love for horror and candy was surgically removed along with the rest of your memories by a dubious Canadian weapons program to make you the perfect Super-Soldier or whatever, my condolences, bub, you can skip to the part past Dr Horrible for whatever passes as my rational thoughts on these products.  Everybody else, I bring you a Halloween tale from the Gentleman Necromancer!) The cold permeated the autumn air like a void, consuming the lingering essence of summer's heat until every drop was drained and only winter remained.  The Great Harvest passed a mere fortnight ago.  The villagers celebrated in dance, masquerade, debauchery; alone in the deep wood, I attended the rituals of the Tome, required to collect and distill the tangled, manic energies of Moon and Man. When my Curse first manifested, my caretakers apprenticed me to the Crone.  She resided on the outskirts, and for this reason, but more especially her poultices, her restorative remedies, she was tolerated, while the crop was bountiful.  Under her tutelage, I learned the power of the seasons, of transitions, the spaces in between.  She taught me of birth, death, and the shrouded quickening that completes the cycle. But a drought came in my sixteenth summer, and the elders came to speak to my mistress as to what could be done, when the God to whom they cried appeared deaf and silent.  What fickle creatures, man, what feeble minds! It is to my eternal shame that they came upon me before they reached the small, thatched cottage. My mistress had bade me to take precautions, but in my reckless youth, they observed me conversing with the Quiet when I thought myself alone. Fear turned to blame like a spark into flames, and while I escaped to exile, the kindly moon woman was tied to the stake and set ablaze. Unblinking, I watched their burnt offering of panic disguised as piety through a horned owl's eye. Helpless to save the Crone, or even speak my remorse, a ravenous wraith coiled round my heart called Wrath. Many years have passed since that night. While I have scoured the underground boneyards and charnel houses, gathered the bones of murderers from the gallows, and struck bargains for power with beings both infernal and strange, they have forgotten me. The rains returned, as they always would have, and the cattle have grown fat on fields stained with blood. Tonight, they will remember what I have never forgot. [caption id="attachment_840" align="aligncenter" width="225"] 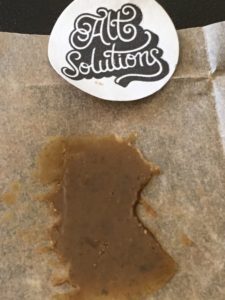 Blue Cheese Bud Rosin[/caption] The thirteen corpses I had spirited to this copse were aligned to match the secret constellations I spied from the banks of the river Styx.  Eight-eight runes were cast as prescribed by the ancient, wailing shade I released of its glacial prison.  The black cauldron hissed and popped in anticipation.  The hourglass pronounced the time as ten minutes past seven.  I withdrew from my satchel the two potions I had liberated from the sanctum of the Seraphim. The Enochian inscriptions read GOJI and BLU ECH IZE. I confess some trepidation upon inspection.  In the scrolls, the blessed rosins are described as golden in color and burst with the fragrances of lost Eden's flora.  It would be more apt to say these Alternative Solutions are like dull copper, brownish with the occasional dark speck.  There is a slight scent when you press close.  No earthly solvent debased this holy indica oil, though, and I had come this far, so I place a drop of Blu Ech Ize into the cauldron and inhale deeply of the vapor.  I can taste the ancient flowers from which it was pressed, a dairy flavor with an incongruously pleasant undercurrent of spice, but it is slightly muddied.  An otherworldly calm settles over me, a gentle integration of my dark passions into the single, unnatural act of will that would rent the enervated Shroud that separated this world from the next...for now. My hands moved in concert with my own Shadow, our voices united in an inhuman tongue, and we are joined by Others.  The presence of the macabre, eldritch chorus reassures my purpose. A vengeful joy surges throughout the coven, a desperate, wild cackling that rises into ecstasy as the bone-rimmed Onyx Gate shimmers into existence between us.  Their hunger courses through me, and I am wracked over double with hunger pangs as the shades stare, black oily tongues running over their oddly-jutting fangs.  Power always requires sacrifice.  I can wait no longer and issue a small nod. [caption id="attachment_841" align="aligncenter" width="300"] 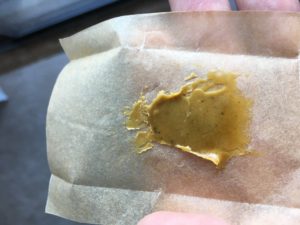 Goji OG Bud Rosin[/caption] My lumbering golem, Fritz, steps forward, pulling a gleaming hot blade from the flames. Wordlessly, mechanically, he clamps his metal hand over my mouth to keep my screams from exciting the demons into premature frenzy, and hold my neck firmly into place. It quietly, lifelessly, presses the knife up and in, and my skull is on fire.  My body fights of its own accord, to no avail against the golem's steel grip.  The pain of having my left eye carved out is simultaneously unbearable and unreal, and my consciousness fractures among those assembled.  We watch intrigued as the weak, fleshy thing shakes in shock, until at last the soulless automaton completes the task. The thing struggles, Yessss, but takes the sweet, little morsel from its hand, a promise of meals to come, Yesssss, and gives it to Usssssss... The shades thus distracted, I reconstitute myself and take a dab, the Goji, and breathe deeply of the smooth pepper fumes.  This sativa rosin provides an instant restoration of focus and mental fortitude, and I proceed with the incantation, the forming of sigils, heedless of my empty, cauterized socket.  Now I can hear the howling of the damned, pressed against the Gate, but the heady rush of the Goji pushed me onward.  Fear would not hold me back, nor the necrosis rapidly spreading outward from the wound, claiming another portion of flesh and sanity to open the Door...to lead out an army of rabid undead...and sate their unholy appetites on living flesh this All Hallow's Eve. Fun stuff!  Let's cut the shenanigans and talk brass tax.  At $90/gram, the price for the bud rosin available in the dispensaries is still too high.  It ought to be artisanal hash at that price, golden, with a fragrance that fills up a room when you open the paper.  It is, however, an enormous upgrade over their trim rosin at a fractionally higher cost.  It is completely stable and you'll get every last drop you paid for. I could definitely taste both flowers they were pressed from, as I'm very familiar with both strains from Alternative Solutions, but the taste wasn't entirely clean. Since it's rosin, though, there's no solvents so at worst you're getting a little plant matter in there.  Again, it's nothing like the overwhelming taste of chlorophyll in the trim rosin. In effect, they both work wonderfully- I found the Blue Cheese to be a very interesting calm that worked its way into my emotional matrix organically, instead of overpowering it.  It brings on the munchies like a cabal of raving devils, so plan on eating.  Blue Cheese rosin is relaxing enough to help you fall asleep when you're already exhausted, but won't knock you out during the daytime.  I highly recommend trying it if you suffer from emotional swings.  The Goji is heady, energetic and focused, and while I don't find my thoughts racing on this sativa, neither do I feel a strong mental barrier against anxiety.  I recommend it if you have work to get through, something to keep yourself occupied with, not for vegging out to Netflix. Overall, the bud rosin is a good product.  It's good for DC medical marijuana patients that don't want to venture into the gray market, as the cost for a gram of good concentrate has gone down from $150 to $90, so once again in DC MMJ history Alternative Solutions rides to the rescue (you can still spend the extra money on Holistic Remedies' concentrate if you're a crazy person). If you are comfortable with the gray market, of course, you're going to find much better pricing- but often little choice, and especially consistency of that choice, in the strains available.  At the dispensaries, you'll be able to get Alternative Solutions' bud rosin in lots of different flavors, so if you find certain strains very helpful and others detrimental, like I do, the reliability may be worth the higher price to you. So is it Trick or Treat?  Well, both. There's some room to improve quality, and definitely to improve the price, but I'm pleased to report that the medical program's concentrate offerings are a lot less scary with this product on the shelf.  I'll definitely be keeping my one remaining eye out for some Midnight and Pineapple Skunk flavors as my zombie horde pillages the lands of the living. Mwahahahahaha!